If you're looking for sailfish, these are the locations to start your search 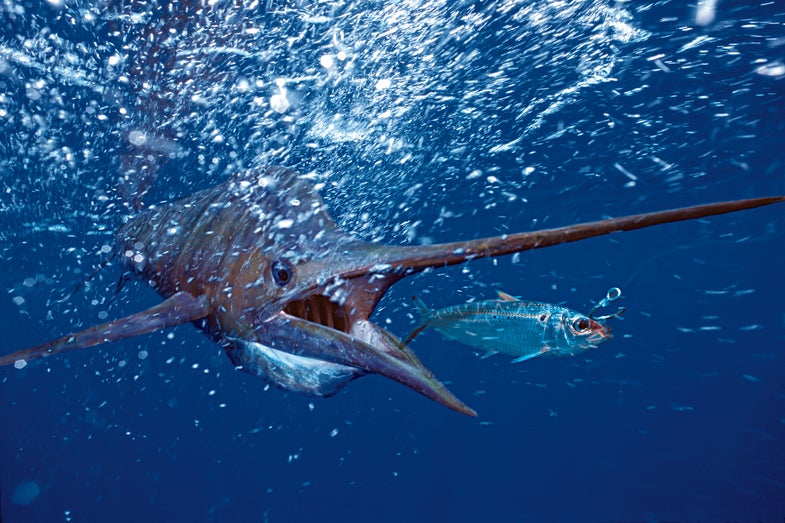 The late-winter end of sailfish season in southeastern Florida had long since passed as billfish tournament veteran Grayson Kyte and I ventured through St. Lucie Inlet in Stuart, Florida, in my 23-foot Bay Ranger—hardly the type of boat that conjures images of extraordinary offshore action. Near the beach, I threw a 12-foot cast net over a school of threadfin herring and filled the livewells. Shortly thereafter, 5 miles offshore, in about 70 feet of water, we hastily rigged and pitched four baits—realizing instantly that we had dropped into a sailfish feeding frenzy. By day’s end, we’d released six sailfish in all—two of which we first spotted lazing on the surface—and put a couple of mahi in the box for dinner. It was an extraordinary day by any angler’s standards.

Fifteen or more years ago, such days were unheard of. No one targeted sails out of such small boats using such rudimentary tactics, and certainly no one consistently caught sailfish off Florida in the summer.

Whether El Niño or global warming has influenced the sailfish migration is not clear. What is known is that a new ICCAT (International Commission for the Conservation of Atlantic Tunas) sailfish assessment supports the claims of abundance echoed by veteran captains along the southeastern coast. Fisheries biologists have also learned that sailfish aren’t nearly the longitudinal migrators they were once thought to be—their south-to-north travel patterns seem to fluctuate. Wherever they roam, from Key West to canyons off New Jersey, they seek out a narrow range of food-rich warm water, between about 73 and 82 degrees. Here’s a general guide for when, where, and how you can find them—in their new hotspots.

SOUTHEASTERN FLORIDA AND THE FLORIDA KEYS: PRIMTIME – NOVEMBER THROUGH MARCH

Along the southeastern coast of the Florida Peninsula, and in the Keys, sailfish are a celebrated bluewater fish. In the northern end of the region, fish are found from the beach to 15 miles offshore. Anglers mostly troll—with light tackle—to cover water quickly. From Jupiter southward, the fish line up along reefs and rips, and the art of kite fishing is king.

Fishing is best from Fort Pierce to Key West from late November through March on days during and after cold fronts push through. Anglers can catch fish from kayaks and even from piers off Southeast Florida and in the Gulf of Mexico, in Florida’s Panhandle.

North of Cape Canaveral, sailfish aren’t necessarily a target species, but they are caught in the spring and fall by anglers trolling for marlin, tuna, wahoo, and mahi, which are found far offshore along the edge of the continental shelf. St. Augustine offers the closest access to the fishy offshore waters known simply as “the ledge.” Often, in the early fall, during the baitfish migrations, a few local captains who really have local conditions dialed in target sailfish in pretty shallow nearshore water—30 to 40 feet. Warm eddies break off the Gulf Stream in September and early October, putting the bait squarely within the sailfish comfort zone.

Here, billfish typically migrate through the blue water toward the end of spring and early fall. When anglers make the 40-plus-mile runs, they’re also typically trolling for marlin, as well as tuna, mahi, and wahoo. Sailfish are often encountered, but captains mostly consider them a bonus.

NORTH CAROLINA AND POINTS NORTH: PRIMETIME MAY THROUGH SEPTEMBER

Off the coast of the Carolinas and farther north, sails are again considered to be a bonus species, especially when the goal is a billfish slam. Peak fishing is late spring to early fall. Primary targets include blue and white marlin, so if you want to add three of the billfish species found in the western Atlantic to your bucket list, including a sailfish, the waters off North Carolina are a great bet.

“Sailfish are usually a little shallower than marlin,” says Captain Shep Dreyry, who fishes the waters of the Outer Banks in North Carolina. “We often run into wolf packs of sailfish when we troll a little shallower—say, 70 to 80 fathoms—which we do when we’re going for a slam.”

Deep water is a 25- to 40-mile run out of most North Carolina ports. Those often-rough waters call for larger sportfishing vessels, and the primary target species call for heavier trolling tackle than is truly sporty for sailfish. If you’re looking for a blue-water adventure in pursuit of various billfish species, it’s hard to beat the Outer Banks.