A fun, handy takedown .22. This Charger is easy to customize 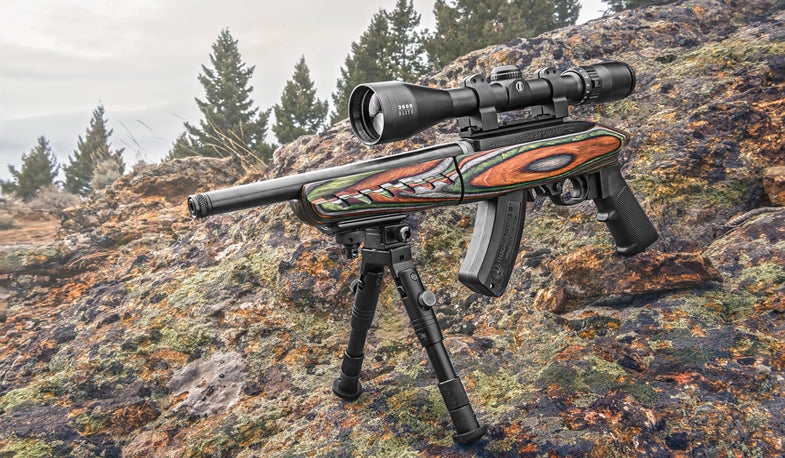 There are two types of people in this world: those who enjoy shooting gophers and those stuffy killjoys I’d rather have nothing to do with. The Ruger 22 Charger Takedown is ideally suited for the former. Ruger describes the gun as a “plinker’s dream,” which is apt, but it’s also a rodent’s nightmare.

As soon as I uncased the 22 Charger, I knew it would be a shooter. Not in the sense of hyper-accuracy, but in terms of basic trigger-pulling fun. My 12-year-old son was with me at the time, and as I assembled the pistol (it comes in a nice James Bond–esqe case) by joining the two halves and screwing on the included bipod, his eyes went wide.

“That’s the coolest gun I’ve ever seen!” he said. Given the number of firearms that are a part of Jack’s world—combined with his preteen penchant for brutal honesty and self-assurance when it comes to judging things hip—that is heady praise.

But this Ruger also appeals to an older set. I showed it to a couple of veteran gopher shooters and they, too, appreciated the Charger’s compact dimensions. As a portable truck gun, it would be hard to top. For any avid shooter, it is the kind of gun that brings a smile to your face.

Chances are you’ll know how to operate this rifle without any prior instruction, as it is based on the ubiquitous 10/22 action. Even the takedown mechanism is intuitive. Just slide the barrel into the receiver, give it a slight twist, and once it clicks together, you’re good to go.

The pistol comes with a 15-round magazine, but it will accept any 10/22 mags you might have lying around. The magazine release lever in front of the trigger guard is generously sized and easy to operate.

On top of the receiver is a 4 ⁵⁄₈-inch Picatinny rail for mounting optics. With a pistol of this type, you have several choices. You can mount a long eye relief handgun scope, like a variable power 2–7X. You can put a non-magnifying red-dot on it with unlimited eye relief. Or you can do what I did and put a regular riflescope up there.

The 4–12X Bushnell 3500 Elite might seem like a strange choice—why put a riflescope on a handgun?—but when you think about how this gun will be used, it makes sense. Whether resting on a sandbag on a shooting bench or on the ground with the bipod deployed, this gun is easier to shoot accurately when a rear squeeze bag is placed under the pistol grip. The .22’s negligible recoil means you can get your eye close to the scope without fear of getting bit. And with one hand on the trigger and the other on the squeeze bag, you’ll get more lead on target.

The accuracy of my charger was good enough for gophers out to 50 yards, but at distances beyond that, hits would be iffy. I shot a number of different types of ammo through it, from high-velocity hollowpoints cooking along at 1,400 fps to subsonic target loads. My best results were with CCI target loads I shot while making an effort to place minimal pressure on the stock. Groups with this ammo (5 shots at 50 yards) averaged .631 inch, while the overall averages for all loads was 1.265 inches. The takedown design, while handy, isn’t built for Olympic-caliber accuracy. Pressure on the stock will cause the firearm to flex and shots to drift.

The Charger cycled and ejected all the loads well, as you’d expect from a gun built on a 10/22 action. And given how much fun it is to shoot, you can also expect to see a substantial pile of empties on the ground when you’re done.

The trigger on my Charger was a typical stock 10/22 type, and averaged 4 pounds 5 ounces with a bit of creep. This was certainly manageable, but a crisp aftermarket trigger with a lighter pull—like a drop-in Timney—would be a worthwhile addition.

The Charger Takedown is offered with different types of stock furnishings. The green, brown, and gray laminate on my sample is the most attractive and expensive of these models. If you go with a plain black synthetic stock, the MSRP drops from $449 to $419.

The pistol grip is a standard A2 from the AR platform, and as such is easy to replace with an aftermarket offering. The barrel is threaded for a suppressor (½ x 28) and comes with a knurled thread protector.

This versatile little rig is easy to configure to your liking and will make for a great addition to any varmint hunter’s—or plinker’s—battery.

The takedown mechanism on the Charger has a simple design. A lug cut into the underside of the barrel rotates into a recess in front of the receiver and, when turned into position, a spring-loaded stud just below the barrel slips into a detent and keeps the two halves aligned.

The bipod that comes with the Charger has legs that extend far enough to keep the magazine from brushing against the ground when the pistol is leveled toward the target. The legs also rotate a bit to allow for easy traversing between targets.