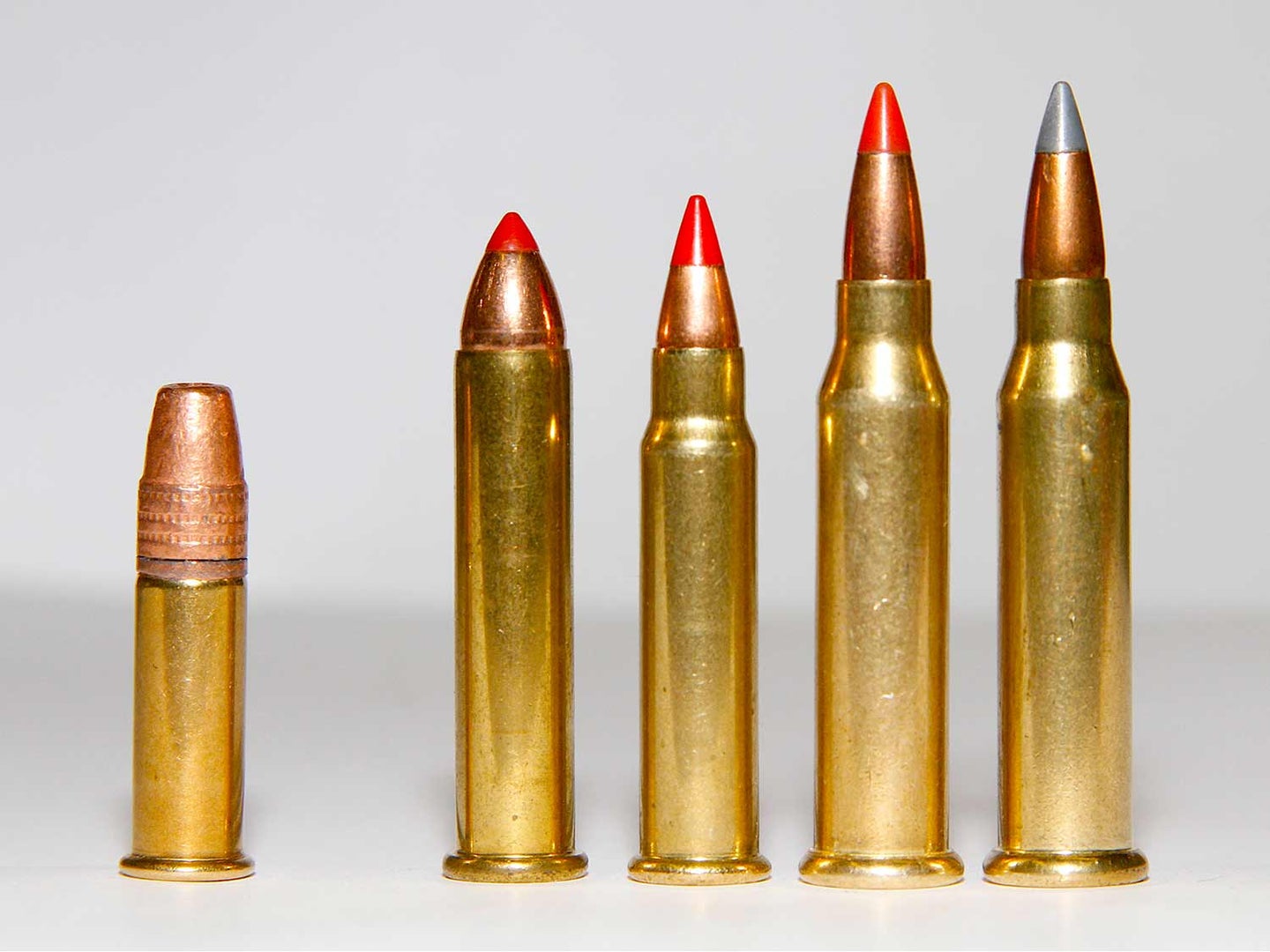 The lowly .22 rimfire is the world’s oldest, most popular, and least expensive rifle cartridge. But it’s not very fast, flat shooting, or powerful. Three other rimfires are: the .17 HMR, .17 WSM, and .22 WMR. But which of the three wins the ballistic battle? Which shoots faster, flatter, harder, and deflects less in the wind?

Here are typical measurements for each. They don’t tell the whole story, but get us in the ball park:

As most students of ballistics know, initial bullet velocity and energy dwindle downrange. Some faster than others. And downrange is where performance matters. So let’s examine these three magnum rimfires in detail. Then you can decide which might be right for your needs. Let’s start with an interesting bit of history…

The .22 rimfire cartridge was born around 1845 when a Frenchman, Flobert, stuck a BB atop a then-new percussion cap and fired it. Yes, the primer alone provided the power, which wasn’t much, but adequate for indoor target shooting.

In the US, Smith & Wesson extended Flobert’s idea with a stretched cap holding 4 grains of black powder. It pushed a 29-grain conical bullet about 800 fps and came to be known as the .22 Short.

Similar rimfire cartridges were created for many years, some as large as .58-caliber shooting 500-grain bullets, but rather slowly because the rimfire system of ignition has one fatal flaw: the cartridge rim must be so soft and thin that it can be crushed by the impact of the firing pin. This severely restricts the amount of pressure that the cartridges can generate without rupturing.

The .22 Long Rifle is rated for a Maximum Average Breech Pressure of 24,000 psi. The .22-250 Remington centerfire is rated for 65,000 psi. This chamber pressure difference is why rimfires can never equal the ballistics of centerfires. But the .22 LR remains popular because it always costs less, recoils less, and makes less noise. It remains popular for practicing shooting technique, plinking, target shooting, small game hunting, and high-volume rodent control. At reasonable ranges and with careful bullet placement, the .22 LR can deliver the goods for hunting foxes, marmots, raccoons, even close-range coyotes. But the magnum rimfires are a better option for anything larger than a squirrel or farther from the muzzle than about 75 yards.

In 1959 Winchester heeded the cry for a more powerful .22 rimfire by slightly lengthening its old (1890) .22 Winchester Rimfire (.22 WRF). The old WFR case was slightly wider and thicker than the Long Rifle case. This meant pressures could be slightly higher (25,600 psi) and bullets didn’t have to be heeled to fit inside the case mouth. This is why .22 LR rounds cannot be safely fired in .22 WMR chambers and vice versa: the chamber dimensions are not the same. Barrel bore diameters are, however, the same, which is why the Ruger Single Six revolver handles interchangeable cylinders, one for .22 LR, the other .22 WMR.

While the .22 WMR’s, 40-grain jacketed hollow point launched around 1,900 fps sounds impressive to a .22 LR shooter, it does not prove ideal for truly long range work due to its bullet shape. The flat-nose and round-nose bullets typically seated atop a .22 Mag incur a lot of drag. This costs them velocity and energy. Let’s run a trajectory table base on CCI’s 40-grain GamePoint load rated 1,875 fps. This bullet, while anything but long and sleek, has one of the best B.C. ratings among .22 WMR bullets. Here’s how it flies when zeroed for MPBR on a 2-inch diameter target zone.

I chose this target diameter of 2 inches because it represents roughly the vtial zone of a small rodent or the head of a large one (woodchuck, jackrabbit). I established zero distance at 98 yards so that mid-range trajectory wouldn’t rise more than an inch above point-of-aim, which happens at about 60 yards. The bullet drops more than an inch below point-of-aim at about 115 yards. Energy at this distance is higher than the .22 LR at the muzzle, so the .22 WMR has a big advantage there.

Wind deflection of almost 5 inches at 100 yards is already showing the .22 WMR’s Achilles heel. It shoots flat enough for a dead-center hold out to 115 yards, but if the wind is 10 mph at a right angle, you’ll miss right or left.

Not shown in this table is the .22 WMR/s reputation for less-than-stellar accuracy. Most shooters report that finding a .22 WMR rifle/ammo combination capable of MOA accuracy (keeping all bullets inside a 1-inch circle at 100 yards, 1.5-inch circle at 150 yards, 2-inch circle at 200 yards, etc.) is rare. Most seem to group 2 MOA to 1.5 MOA at best. We assume this is due to inconsistency in mass-produced factory ammunition more than any inherent qualities of the cartridge itself. Because the 22 LR has long been used in target competitions, most manufacturers offer high-quality ammo engineered and produced with tight tolerances to maximize consistency, thus accuracy. Not so with the 22 WMR.

That said, a broadside coyote offers a much larger vital zone than 2 inches. A 6-inch circle would be about right. This means even a 2 MOA 22 WMR would keep its bullets inside the kill zone at 125 yards, 150 yards, even 200 yards. And maximum point blank range could be extended to about 160 yards, as this table indicates. Of course, the wind deflection problem persists. And there is the issue of declining energy. Exactly how many ft-lbs are required to terminate a coyote is a moot point.

Clearly, the 22 WMR is a significant improvement over the 22 LR. Is there any rimfire better than the .22 WMR? Let’s dig deeper and see.

That brings us to the 17 Hornady Magnum Rimfire. This one, created by necking the .22 WMR down to hold a .172” bullet, was unleashed on an unsuspecting public in 2002. It was virtually an overnight success. Even though it shoots a sliver of a little bullet weighing just 17-grains, the sleek, pointy shape of those bullets — coupled with a launch speed averaging 2,250 fps — gives the 17 HMR impressive reach and surprising punch. The trajectory table below is based on a 2-inch diameter target.

Study the drop, windage (deflection) and energy columns here and you’ll see how the little .17 HMR bests the .22 WMR in some categories, but takes a back seat in others. It’s definitely a flatter shooter with a MPBR to about 170 yards. That gives it about a 50-yard advantage over the .22 WMR. Alas, at 170 yards, remaining bullet energy isn’t much. Still, on prairie dogs, jackrabbits, and rock chucks, I’ve found it enough to terminate rather reliably, if not dramatically this far out. For coyotes, though, I’d want to stick to 125 yards or less. And pick my shots carefully. Slipped behind the shoulder into the heart/lungs, it’s quite effective.

The .17’s wind drift advantage over the .22 WMR helps sell me. This surprises many shooters who have too often heard that heavier bullets deflect less in winds than do lighter bullets. No, it is high B.C. bullets that deflect less. Muzzle velocity contributes, too. The faster the better. Less wind deflection of 1.5-inches at 100 yards may not seem huge, but its on the ragged edge of a miss on those 2-inch targets. If you’re needing precision more than punch in your rimfire, the .17 HMR is your ticket.

Not shown in this table is the consistent accuracy of the .17 HMR with most ammo in most rifles. Rumor has it that all manufacturers from the get go strove to produce consistent ammunition in .17 HMR in order to boost initial sales. They’ve apparently stuck with this. Most rifles chambered .17 HMR are single-shots or bolt-actions, both traditionally with excellent triggers and consistent bedding that contribute to stellar accuracy. How they manage to produce such consistent barrels with tiny 17-caliber bores amazes me, but they do it. You can get 20-grain bullets in the .17 HMR at about 2,375 fps, but they increase kinetic energy by only a handful of foot-pounds while increasing drop by about 1.5 inches at 150 yards. There’s hardly any difference in drift.

I give the win to the the .17 HMR over the .22 WMR for everything except coyote-sized varmints after 100 yards.

But we haven’t considered the 17 WSM yet.

Let’s end the suspense right now. Winchester’s newest rimfire blows both the .22 WMR and .17 HMR out of the race. In all categories except available rifles. Not many are chambered for it, more’s the pity. Because ballistically this is the world’s reigning rimfire champ.

Before we look at the trajectory table, let’s dig into the .17 WSM’s genesis. This round was created by taking a 27-caliber nail gun cartridge, necking it to .17, and topping it with a fairly high B.C. projectile (for a .172” bullet.) The standard 20-grain bullet carries a B.C. of .185. That’s a major contributor to its superior downrange performance. But the 3,000 fps launch speed doesn’t hurt, either, and that’s due in part to this thicker case being allowed 33,000 psi pressure. This little rimfire is treading on the heels of centerfire varmint rounds like the .22 Hornet. Let’s run a trajectory table on our 2-inch target and see what happens:

Here we see that MPBR extends to 180 yards, about a 65-yard improvement over the .22 WMR with the same 2-inch target. This means you could aim dead center on a 2-inch target from 10 yards out to 180 yards and hit it — given an accurate enough rifle and shooter. Wind deflection at 100 yards is more than 3 inches less than the .22 WMR’s and 1.6 inches less than the .17 HMR’s. Most telling might be the energy numbers. Thanks to this heavier, faster, higher B.C. bullet, the .17 WSM carries more kinetic energy downrange than either the .22 WMR or .17 HMR. At 180 yards it’s packing more ft-lbs than the .22 WMR hauls at 70 yards.

So why doesn’t everyone get a .17 WSM and call it good? Well… There are not a lot of rifles chambered for this hot-rod rimfire. And those that are haven’t been impressively accurate. Like the .22 WMR, the .17 WSM seems to fall into that 1.5 to 2 MOA category. There are exceptions. I found a Browning M85 single-shot that could usually stay at MOA with a flier now and then. Ditto a Volquartsen autoloader. The fliers would seem to be indicative of an ammunition issue similar to that of the .22 WMR, but this is speculation on my part. And all my tests were conducted shortly after the .17 WSM was introduced in 2012, so ammunition consistency could have been improved since then.

Both the .22 WMR and .17 HMR are firmly established as standard rimfires. Most ammunition manufacturers load for both. Most rimfire rifle builders chamber for both. The .17 HMR loadings and/or rifles appear to be more consistently accurate. The .17 WSM is not as solidly established but, based on potential, certainly should be. Ammo costs per box of 50 run $12 to $13 for 17 HMR, about $1 less for .22 WMR, and $2 to $3 more for .17 WSM. None come close to matching the low per-shot costs of .22 LR, but all shoot rings around it.

Selection among these fast rimfires comes down to your needs. As small game cartridges all are potentially too destructive. Even when limiting myself to head shots I sometimes lose front quarters on tree squirrels due to the explosive impact energy of a .17 HMR. But I love the reach and precision accuracy of this round. It’s one of my favorites for open-country jackrabbits, rock chucks, pigeons, and certainly ground squirrels. I’ve found it effective on called foxes, raccoons, and even coyotes with careful shot placement.

The .17 WSM would be my choice for bigger varmints and coyotes stretching to 150 yards or so, especially in wind. I’ve shot some MOA groups at 300 yards with one .17 WSM rifle, but remaining energy at that distance doesn’t suggest using it for game much bigger than prairie dogs. Since both this and the .22 WMR seem to have similar accuracy potential, I see no advantage in the ballistically inferior .22 WMR except as a potential defense handgun and snake charmer in a pistol. On the other hand, there are more rifles chambered for .22 WMR than .17 WSM.