We put the Sig XMacro to the test 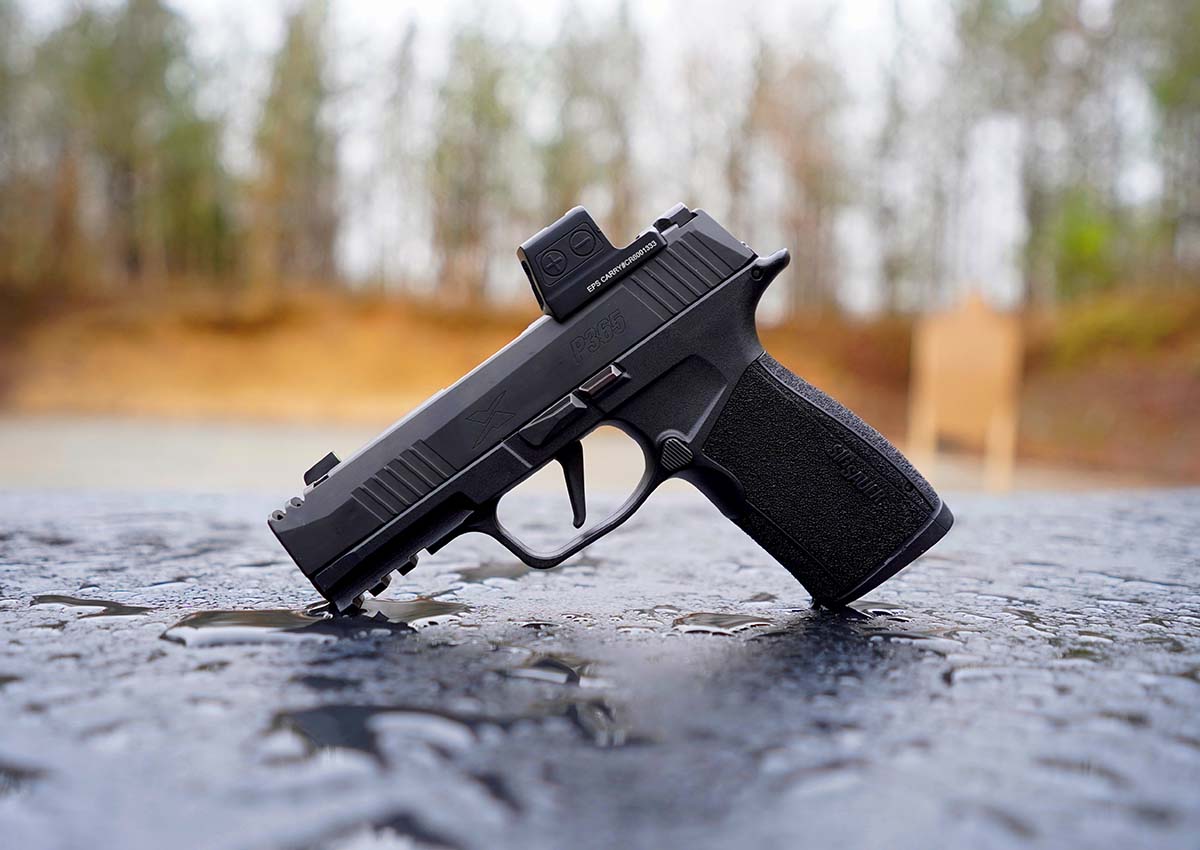 A gun that’s easier to carry concealed usually comes with trade-offs like reduced capacity, less grip real estate, and more muzzle rise. But then came guns like the Sig Sauer P365, which significantly increased the capacity of sub-compact pistols. Then Sig once again pushed the capacity of a compact handgun when they introduced the P365 XMacro, which added seven rounds to the P365 for a total of 17+1 capacity. The XMacro also increased the grip real estate and cut down on muzzle flip.

I don’t like switching up my primary carry gun, but the XMacro had enough new features to get me to check one out at my local gun store—I bought it that day. Since then, I’ve put 800 rounds through it, and I’m ready to share what I think of the gun.

Compensators on carry guns is a growing trend, but it usually means you need a threaded barrel to attach a compensator. The XMacro has a unique way of redirecting gas like a compensator but without attaching anything to the end of the barrel. The slide is longer than the barrel, and it has cuts at the top to vent gas.

Does it work? One of the first things I noticed about the XMacro was that it was an exceptionally flat shooting gun. Compared to my M&P Shield, there is significantly less muzzle flip. You can see the gas being directed straight up in photos I took during testing.

You can look at the official specs in the list above, but here are some additional specs to give you an idea of the XMacro’s size.

On my scale, an unloaded XMacro with a Holosun EPS mounted weighed 1 pound 6 ounces.

From the end of the beavertail to the front of the slide, the gun measures 6 ⅝ inches. The gun is 5 ¼ inches from the top of the slide to the bottom of the mag. It’s 1-inch wide at its widest point, the mag well.

The XMacro is just 1-inch wide, but it has a 17-round capacity with flush-fit magazines—no extensions needed. It’s quite a feat to get full-size handgun capacity into a carry gun, but it comes at a compromise. As you get the 15th round seated, you’ll notice that the following two rounds are very difficult to load. If you want to load to full capacity, a magazine loader is the only way to make the process not an exercise in frustration. Sig includes a mag loader with the gun.

Testing the Sig P365 XMacro on the Range

I’ve shot 800 rounds through my XMacro, which included Federal HST, Speer Gold Dot G2, American Eagle, Federal Syntech, Blazer Brass, and Winchester White Box. During those 800 rounds, I never cleaned or lubed the gun and had zero malfunctions. That includes range sessions where I was shooting in the rain, dusty conditions, and dropped mags in the dirt.

Here is what I think of the XMacro’s trigger, ergonomics, recoil, and ease of carrying based on my time shooting it.

Let’s start with my least favorite thing about the XMacro, the trigger. It’s a long trigger pull with no defined stopping point. It just continuously creeps along until it breaks.

It starts with the take-up you’re used to with striker-fired guns, no issues there. Then you have about ¼ inch more movement until the gun fires. I’d describe that ¼ inch of movement as spongy and unpredictable because as the trigger creeps toward the break, it’s hard to know when the gun will fire.

That’s an academic look at the trigger, but in practice, I had no issues shooting fast and accurately at 10 yards. The only time the trigger caused a real issue is when I shot groups at 25 yards because if I didn’t focus on the trigger pull, my groups opened.

I wear an extra-large glove and can get a full grip on the XMacro. The magazine release and slide stop are also easily reached without breaking my grip. To get another perspective, my wife who has much smaller hands, also can reach the magazine release without breaking her grip. She said the grip size feels good to her and the trigger reach was good for her hand size.

You can customize the grip size by swapping the three included backstraps (small, medium, large). The backstraps and the majority of the grip have a texture that strikes a nice balance between grippy without being abrasive. I’ve shot the XMacro in the pouring rain and never lost my grip with wet hands.

The frame has an undercut trigger guard and beavertail, which promote a high grip for better recoil control. The XMacro has forward and rear slide serrations, so you can press check to your heart’s desire.

The good ergonomics make the Sig XMacro a very easy-to-shoot carry gun. But what I think helps it shoot exceptionally flat, compared to my M&P Shield, is the compensator. It’s not a traditional threaded-on compensator, and it’s not even attached to the barrel. Instead, the slide is longer than the barrel and has cuts that direct gas upward. It’s a very smart way to build recoil control into a carry gun. It’s also great for folks that live in states that restrict threaded barrels.

When you hit the magazine release button the mags shoot out of the gun—no flicking mags out necessary. I can even hold the grip parallel to the ground and empty mags still fully eject. The mag well is flared, which helps in hitting reloads, and the mags easily seat.

I bought the Sig Macro as a carry gun, and I’ve been carrying it appendix after my first range session in a Tier 1 Concealed Agis Elite. The grip texture hasn’t irritated my skin and the gun is comfortable to carry. One thing of note is that the gun’s barrel length and overall thickness are excellent for concealed carry, but the grip length is on the longer end. It won’t be an issue if you’re used to carrying a Glock 19-sized gun, but don’t expect P365-type concealability.

Stripping the gun for a routine cleaning is very easy. Here’s how it’s done:

I really appreciate that Sig has removed the need to pull the trigger to take down the gun, which is common in striker-fired pistols.

What the XMacro Does Best

The P365 XMacro has a lot going for it including: recoil control, round capacity, easy optics mounting, good carryability, and ergonomics for a wide range of shooters. All those attributes are why it replaced my other concealed carry pistols.

Where the XMacro Can Improve

The trigger is the least impressive part about the XMacro, but I suspect it won’t take long for an aftermarket trigger to come along. The difficulty in mag loading is another con, but one that is workable thanks to the included mag loader.

The XMacro isn’t a pocket pistol, and it isn’t a full-size gun. It falls somewhere between the two. With its 17-round capacity, full-length grip, slim profile, compensator, and short barrel, it’s a gun that you can have fun shooting at the range and comfortably carry.