While the biggest news coming out of Browning-Winchester this year is the reemergence of the venerable Model 70, Browning fans have something to cheer about as well. 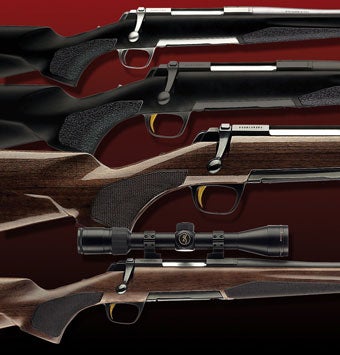 While the biggest news coming out of Browning-Winchester this year is the reemergence of the venerable Model 70, Browning fans have something to cheer about as well.

The latest addition the Browning family is the X-Bolt, a rifle that will look very familiar to shooters who have spent much time with the A-Bolt, yet it comes with a number of interesting innovations.

In the Model 70 it is called the M.O.A. On the X-Bolt it is called the Feather Trigger. By either name the new trigger on these rifles is an impressive bit of engineeringÂ–impressive in the same way that the locks on a fine English shotgun are impressiveÂ–namely for its elegant simplicity. The Feather Trigger contains just three major pieces and is adjustable down to a 3-pound trigger pull, though they come preset from the factory to break at about 3 1/2 pounds.

As a technical aside, it is worth noting that the M.O.A. and the Feather Trigger are not interchangeableÂ–all the components are different, though the concept behind their operation, a three-lever system, is identical.

All X-Bolts come with a detachable rotary magazine. The magazines are made from a toughÂ–really nearly indestructibleÂ–and lightweight polymer. The magazine’s design positions the top-most cartridge dead center within the action and in line with the bolt so all rounds feed straight into the chamber.

The magazine sits flush in the stock and is released by a catch that is a part of the magazine, so that the magazine slips very naturally into your hand when you release it, a well-thought-out ergonomic detail. My favorite innovation with this magazine, however, is the molded contours in the magazine’s interior. These contours snug up against the shoulders of the cartridges so that under recoil the tips of your bullets will not slam against the front edge of the magazine.

Browning’s engineers have modified the mounting system on the X-Bolt so that each scope mount is secured to the receiver by four screws instead of the more traditional two, the idea being that with four contact points the bases will tend to align with more precision. (Of course, why not just skip the issue all together and design a receiver with integral bases? This is a concept familiar to owners of Rugers and is appearing on a growing number of firearms, especially AR-style rifles, as well as the Thompson/Center Arms Icon, introduced last year.)

The barrels on the X-Bolt are free-floating and the actions are bedded at both the front and the rear for improved accuracy potential. The barrels also come with recessed crowns to protect the rifling at the muzzle.

The X-Bolt has a two-position tang-mounted safety. With the rifle on safe, the bolt is locked in place though Browning has added a button at the top of the bolt handle, which lets the user open the action with the safety on.

The X-Bolt will be offered in a full line of chamberings and action sizes that break down as follows: