How to Find and Hunt Grouse in the Early Season

It’s tempting to write off September ruffed grouse hunting: A jungle of green leaves awaits, and temperatures in the 80s,... 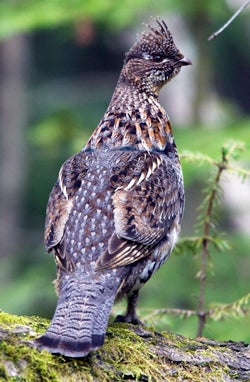 It’s tempting to write off September ruffed grouse hunting: A jungle of green leaves awaits, and temperatures in the 80s, with humidity to match, make the pursuit of grouse seem daunting indeed.

But reasons to hunt early-season grouse outnumber the excuses to stay home. There are more birds now than at any other time in fall. They haven’t been hunted yet. Conditions concentrate grouse where you can find them. And broods of young ruffs remain together, which can mean close flushes and fast action. Here’s how and where to hunt early-season birds.

Hit the “Open” Woods
▶ Grouse like thick cover, but they also like to be able to see along the forest floor. Instead of plowing through the awful places you’ll be hammering in October and November, concentrate on cover where you can actually walk a little upright.

Locate Lucky Lanes
▶ Hunt tote roads, logging trails, farm lanes, snowmobile paths, and other cover corridors. Grouse like the transition zones here, as well as the clover that grows in the sunny openings.

Snap Shoot
▶ You need to be ready on the trigger. When you flush a bird, swing with the noise and be alert. When the grouse flashes through an opening, keep swinging and shoot, leaves be damned! Follow up every shot.

Hunt Early–and Late
▶ September grouse feed early in the day and again in the evening; midday heat causes the birds to lie low. So hunt the first and last couple of hours of light. Neither you nor your dog can hunt all 12 hours of a September day anyway, so time your hunts wisely.

From the September 2012 issue of Outdoor Life magazine.