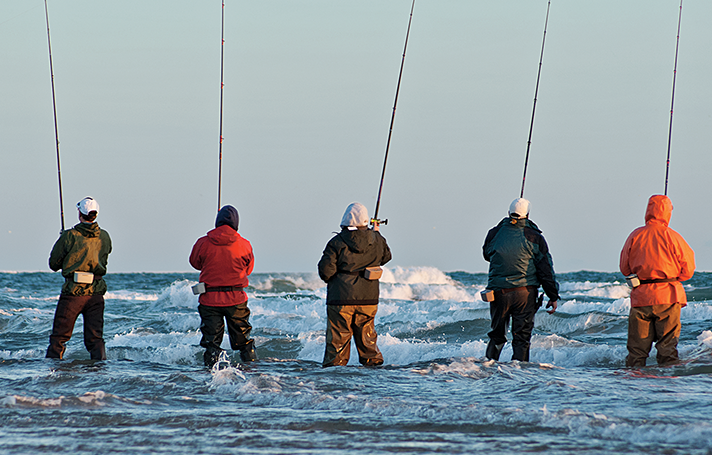 The long-haired, board-toting, eternally tan loiterers of our country’s best beaches have it all wrong. The most titillating aspect of killer surf has nothing to do with cruising atop it. In those same swells and breakers swim some awesome fishing opportunities if you know how to exploit the situation. Here, kings of the surf provide their inside strategies on specific fisheries across the nation and how to identify sweet spots on seemingly indifferent areas of shoreline. Follow these instructions, and “hang ten” will have a whole new meaning.

The Deal: “North Carolina’s Hatteras Island is the perfect place to intersect fish migrating up and down the coastline from late spring through summer.”

The Trick: “My favorite spot is a break in a sandbar,” says Farmer. “To find these breaches, look for breaking waves. I’ll put a bait on the front side of the break, in the middle of the break, and on the outside until I figure out where the fish are positioned.”

The Gear: Farmer’s rig is unique and set up for long casts. “I slide a pyramid weight, which is attached to a swivel on my main line above a swivel, and then attach a 2- to 3-inch section of fluorocarbon leader to a 8/0 or 9/0 hook,” he says. “Cut menhaden is often the bait of choice.” This compact setup is super easy to cast (weights vary from 4 to 8 ounces, depending on current) and doesn’t helicopter in the air, offering much greater distance.

The Deal: “There is a tremendous migration of sandbar sharks that starts in early spring. Thousands will come up the coast of South Padre Island when the water temperature hits about 65 degrees. In one day, I’ve landed 12 between 5½ and 7½ feet—after my small gear had been destroyed by fish we couldn’t turn. This is exciting big-game fishing!”

The Trick: “You want to fish gaps in the sandbar. One way to identify these is to look at the dunes on the beach. When you see where a dune was gouged from a major storm, picture a line out into the ocean and most likely the sandbar was wiped out as well. These spots can be good for three or four years before filling in.”

The Gear: “Start with a kayak. You have to use big gear for catching these fish, and you can’t cast big gear far. So, I kayak the bait out anywhere from 100 to 300 yards.” Woods uses a fish-finder rig with 500-pound shock leader leading to 200-pound wire, terminating at a 10/0 to 16/0 hook. He uses a high-capacity reel filled with 80-pound braid and about 100 feet of stretchy 80-pound mono so a fierce run won’t snap the line. “The favorite bait is stingray,” he says. “We use about a 1-pound chunk of it. Whiting works as well. And when these fish start blistering off line, just tighten the drag. No need to set the hook on an outbound bus!”

The Deal: “May through June provides a truly special window of opportunity for surf anglers in Southern California. It is during this time frame that sand crabs come out of hibernation, and the corbinas come in the biggest numbers of the year to the feast.”

The Trick: “Unlike with a lot of surf-fishing, you spot and stalk these fish. Walk the beaches looking 15 to 20 feet from the dry sand toward the breaking surf. The corbinas will be feeding in the troughs and depressions made by the surf. Also focus on areas where rock and sand meet, as well as rip currents.”

The Gear: Varney stresses that light tackle is a must, and often uses 4- to 8-pound-test on forgiving gear. A live sand crab is the best bait on a fish-finder rig with a ½-ounce weight and 24-inch fluorocarbon leader. “These fish aren’t very big­—they only get to about 7 pounds, but they are very challenging to catch. Landing three in a day would be considered awesome. It’s the challenge that is so exciting and what makes them popular. And when these fish bite, they hit like a freight train. With light gear in crazy current, a 20-minute fight is standard, and the fish usually wins.”