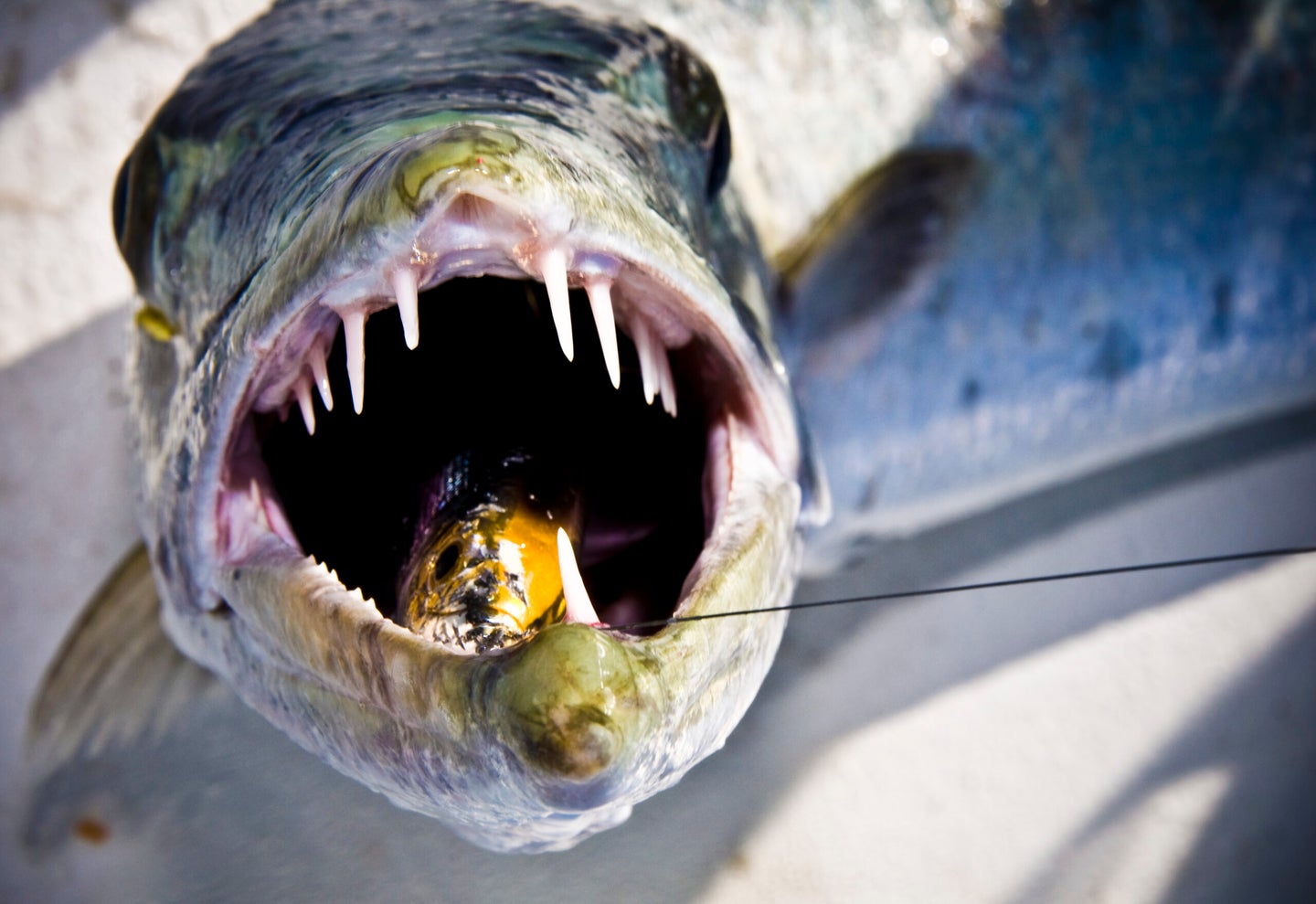 Barracuda are the most terrifying fish in U.S. saltwater. I’m not basing that on attacks, because they are extremely rare. I’m also not suggesting they are the most dangerous fish. They’d be pretty far down the list from all the inshore shark species and even stingrays, which jab countless bathers and anglers every year. I’m basing my assessment on shear looks and behavior. Barracuda are menacing. They scowl. They never take their eyes off you—just ask anyone that’s snorkeled around them. They will lie perfectly still, almost in a trance-like state for hours, but when they decide it’s time to eat, the attacking blow is swift and violent. So fierce is the fight of a big barracuda that I’ve always been shocked more people don’t travel to target them specifically.

I’m especially talking to you, Midwest muskie addicts. There are so many similarities between the two fish—except, of course, that ‘cudas eat a lot more often—it’s always bothered me that when your home waters lock up in winter, more of you don’t flock to the south with your glide baits and Shimano Tranx. Part of the reason I believe barracuda don’t get enough love is that they’re viewed as easy targets that strike anything moving. I can tell you from years of experience, that isn’t the case. Just like with muskie fishing, to score a trophy you need to put in your time and hone your approach. Here are some pointers for turning everyone else’s bycatch into your fish of a lifetime.

Barracudas are one of the most prolific fish on the planet. There are several species swimming around, though the most prevalent in the U.S. is the great barracuda. These fish have been known to wander as far north as Massachusetts in the late summer, though their year-round stronghold extends from South Carolina, all the way around Florida, and across the Gulf of Mexico to Texas. If you’re headed off to a Caribbean Island this winter, you’ll find them there, too. And, when you tell a charter captain you want to get after barracuda, I promise you’ll make their day.

There are barracuda in almost every marina, cove, and harbor within their range. Offshore, they are stacked on reefs, wrecks, and rock piles. During most charter days, a captain is hoping to avoid them, and likely knows where the biggest specimens in the area hang out. So, getting your lures in front of heavy hitters is an easy ask, particularly in Florida. The little guys hanging out by the dock are willing chew all the time but fooling a 20-plus-pounder takes effort.

Also, like trophy muskies, trophy-class ‘cudas are discerning. They often need to be coaxed by exactly the right lure moving at the right speed with the right action. The game involves covering lots of water, particularly channel edges, sea walls in proximity to deep water, and any structure like channel markers, jetty points, and inshore buoys that break current and attract forage fish. Of all the scenarios in which I’ve hooked massive barracuda, however, the most fun was while “pot holing” in the Florida Keys.

“Pot holing” refers to combing vast expanses of clear, shallow flats and targeting the interspersed depressions among the white sand. These “pot holes” appear darker than their surroundings, and they are just deep enough to conceal large barracuda. You rarely see them first; the entire flat will appear void of life until your lure passes over the hole and the ‘cuda erupts. When it happens, your gear better be up to snuff.

The only reel I’ve ever seen actually begin to smoke was while pot holing for shallow-water barracuda. The fish, which looked to weigh about 30 pounds, ran so hard after the hookset that my buddy’s largemouth-sized baitcaster couldn’t handle it. But a larger profile baitcaster designed for muskies certainly would. The strength and action of a standard muskie rod is also ideal for big barracuda, and it will also allow you to effectively throw lures most barracuda have never seen.

Glide baits in light colors are very effective, as are large soft-plastic swimbaits, though unlike in the muskie game where you might get a few fish on one bait, a barracuda will destroy soft swimbaits. These fish also respond very well to aggressive topwaters with a steady, rhythmic cadence such as a Whopper Plopper or classic wood chopper. As barracuda are highly responsive to flash, I wouldn’t rule out a double-bladed bucktail being extremely effective, especially since you can burn them at a good clip. Regardless, you still get to use your favorite brand of steel leader, and no, I wouldn’t temp fate with heavy fluorocarbon. A huge ‘cuda that decides to strike won’t be leader shy, but it’s also not going to let you put it in the net in 8 seconds like you would a muskie back on the home lake.