It would be extremely difficult to find another hunter who has more giant bucks hanging on his wall than Stan... 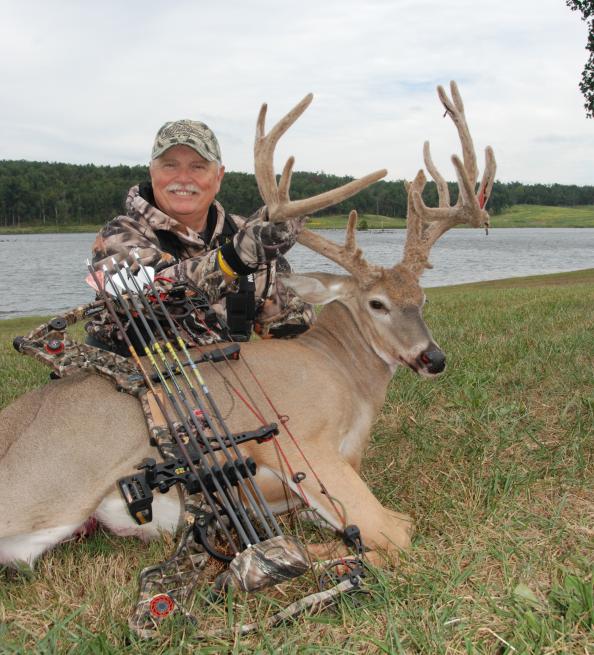 It would be extremely difficult to find another hunter who has more giant bucks hanging on his wall than Stan Potts. For more than 40 years, Potts has been busting mature bucks across the nation. A few weeks ago, Potts added another top-heavy buck to his list that was packing extra-long tines and covered in velvet. Here is how this amazing hunt unfolded.

On this particular hunt, Potts got on the trail of a giant velvet-covered buck in the Bluegrass State of Kentucky. This particular deer had been frequently visiting a small isolated green field that was surrounded by timber. Pre-season scouting revealed that the buck was bedding on a wooded bench directly above the hidden food source. Potts decided to hang multiple treestands to compensate various wind directions and hunting conditions.

Trail camera pictures told Potts that the best time to intercept the buck would be during the late-evening hours. For years, Potts had been dreaming about the chance to come face to face with a velvet-coated giant buck. Harvesting a whitetail in velvet was the one accomplishment that had somehow evaded Potts throughout his hunting career. However, Potts had a gut feeling that this year could actually be the year that he would finally connect with a velvet trophy.

Like clockwork, the velvet monster and a 150-class 10-pointer made their way to the field. In most cases, mature bucks like these generally stick to a nocturnal schedule until the rut. However, even these masters of stealth are vulnerable during the opening days of season.

“When the buck slowly worked his way into bow range, I thought my heart was going to jump out of my chest. The extra-tall velvet-covered tines combined with the buck’s heavy mass really kicked my adrenalin into overdrive. I had to make myself stop looking at the antlers and take a deep breath to calm down. Finally, I was able to come to full draw and release an arrow…”

By the way, Potts’s amazing buck green scored more than 197 inches and carried 16 super-long velvet-coated points. You’ll be able to see the entire hunt unfold on both “Mathews’ Dominant Bucks” and “North American Whitetail” television shows next fall. Stan says that the footage they captured on this hunt is probably the best of his career. Congratulations Stan on another super nice whitetail!