As a deer hunter, can you imagine having a close encounter with a 36-point non-typical monster that would score well... 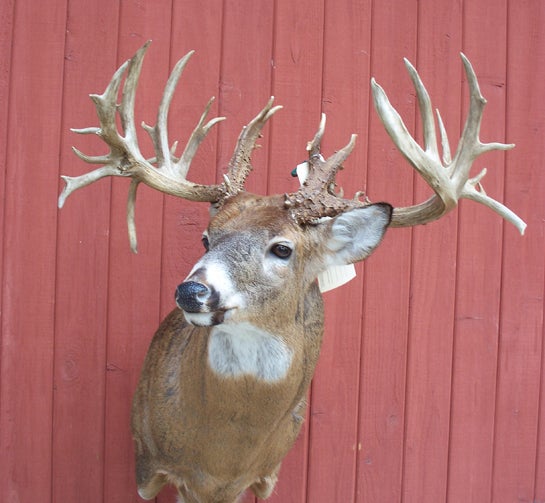 As a deer hunter, can you imagine having a close encounter with a 36-point non-typical monster that would score well over 250? What would you be willing to do or sacrifice to get a shot at such a phenomenal whitetail?

Unfortunately, there are some who fall victim to rack envy and cross that ethical and legal boundary by poaching a trophy buck. Recently, the Illinois Department of Natural Resources (IDNR) Conservation Police arrested three men for poaching deer. One of the deer they are suspected of poaching was a potential Illinois state record non-typical whitetail that scored 261 5/8.

This particular buck carried 36-points that shot off its extra-thick rack in every possible direction. According to the DNR, the deer had illegally been harvested in Grundy County, but a thorough investigation of this particular case uncovered more startling facts. Over a 10-year period, the three men (Christopher Kiernana, Garret Armstrong and Larry Smith) had unlawfully harvested a total of 24 deer across the state of Illinois and Canada, according to the DNR.

The men that were involved in this 10-year poaching ring were residents of Illinois, New York and Canada. They received a variety of Wildlife Code violations ranging from unlawful possession of illegally taken deer, falsifying harvest records, hunting without the permission of the landowner and numerous other major charges. The case is still under investigation, so the DNR is not releasing more specific details.

According to Rafael Gutierrez, the IDNR Conservation Police Chief, poaching is a serious matter in Illinois and violators will be prosecuted to the fullest extent of the law. “The IDNR Office of Law Enforcement has zero tolerance when it comes to poaching matters. Our Conservation Police will continue to protect our natural resources so that legal sportsmen get every opportunity they deserve,” he says.

Without question, poaching can be one of the biggest problems that legal and ethical hunters face each season. Over the years, I’ve covered several heartbreaking stories that involved a legitimate hunter losing a trophy buck to a poacher. Some of these hunters spent countless hours scouting, hanging trail-cameras and re-positioning stands, but were robbed of their much-deserved opportunity by an illegal act.

On that note, do you feel your state’s current poaching penalties are enforced and strict enough or should they be increased and enforced more?