It’s official. Based on the Boone & Crockett scoring system, the buck shot by Johnny King in the fall of... 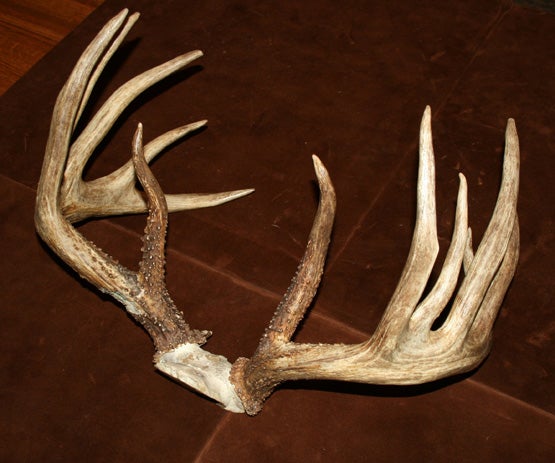 It’s official. Based on the Boone & Crockett scoring system, the buck shot by Johnny King in the fall of 2006 is not the new world record typical whitetail. And the buck’s owner, antler collector Jay Fish, is not a happy camper.

Fish, his wife and son, along with Johnny King had driven 24 hours straight from Wisconsin to Boone & Crockett headquarters in Missoula to hand-deliver the buck to a special panel of B&C scorers. Fish reportedly bought the buck from King for $35,000–thinking it would be a new world’s record. But that gamble didn’t pay off.

On Saturday, I was at B&C headquarters hoping to speak with Fish and King about the buck and the score. But when I heard “180” yelled from somewhere in B&C offices, I knew things had gone south for the Wisconsin clan.

Red-faced and angry, Fish emerged from a conference room at in Missoula. Two separate panels of B&C scorers had determined King’s buck measures 180 as a typical. Fish refused to speak with me, and with a huff, his entourage was out the door.

Ever since King shot the buck with an iron-sighted .30-30 on a family-farm in Wisconsin, the rack and the way in which it was scored has been steeped in controversy. At the core of it all was how the buck should be classified. Is it a typical or non-typical? On most deer, this is a no-brainer, and from afar, the King Buck looks like a typical. But a closer look shows one point on the right side that, according to Boone and Crockett’s Director of Big Game Records, Jack Reneau, is in fact a non-typical point. If the rack was judged as a typical, it would have likely squeaked by Hanson’s world record by an inch or less. But today, four B&C measures affirmed Reneau’s judgement after a special judges panel was called to make a final determination.

After King killed the buck, he had a B&C measurer examine it, not because of the questionable tine, but because a bullet from his hunt had hit the base of the rack. When King went to drag the buck, the antler came clean off. Not getting a clear answer, King met with Jack Reneau who said the deer could be scored with the broken antler, but the right tine could not be scored as a typical point.

After nearly five hours, the judges determined the tine in question on the right side is a nontypical point. At issue is whether or not the tine rises from the main beam, making it an individual point and therefore typical, or does it share a common base with another point making it a non-typical? A press release from B&C states: the third tine on the right antler arises from the inside edge of the top of the main beam, and also arises partially from the base of an adjoining point, thus establishing it as an abnormal point. With this confirmation, two of the rack’s tines must be classified as abnormal points resulting in an entry score well below the current World Record.

Why be such a stickler when it comes to interpreting a buck’s headgear? In short, you need to have standards. And when strictly interpreted, the standards set forth by B&C make sense. “The purpose of the records program was to record the quality of big game in North America,” says Eldon Buckner, chairman of Boone and Crockett Club’s Records of North American Big Game Committee. “The system was designed to represent the most ideal trophy of the species.” Buckner explained that as whitetails have proliferated, so too, have variations in their antlers. And this isn’t the last time something like this is going to come up, Buckner said.

Photos courtesy of Boone and Crockett