The deer season is underway and the big buck rumor mill has already started turning. You might have seen this... 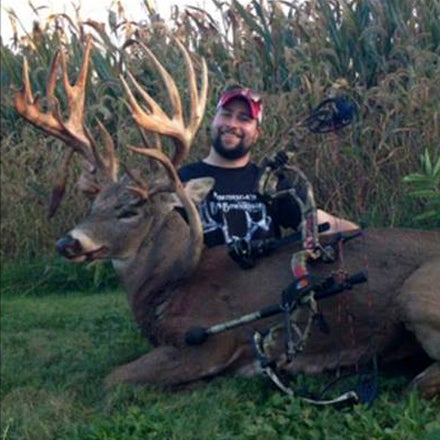 The deer season is underway and the big buck rumor mill has already started turning. You might have seen this monster buck photo floating around since the shot surfaced online earlier this month. Mike Hanback published a short post to his Big Deer blog, but we still haven’t heard the whole story. If you’ve got any details to share about the hunt, comment below. In the meantime, here’s what we think we know so far.

This is a huge whitetail with one gnarly rack. The hefty right drop-tine and pair of double brow-tines are impressive, but it’s the massive drop-club off the left beam that really sets this buck apart. With a reported 22 scoreable points and possible rough scores ranging from 239 to 256 inches, this bruiser certainly could rearrange state record books.

America’s Best Bowstrings posted this photo to their Facebook page on October 2, declaring the hunt “an amazing story of hard work, dedication, and perseverance on a free range Ohio giant.”

Apparently bowhunter Buck Owen finally managed to harvest the big buck he’d been after for years. A second photo appeared the following day, and ABB reported the hunt took place in Wayne County, Ohio. One commenter identified herself as Owen’s mother-in-law to report a green score of 245 6/8.

Recently, Whitetail Chasers shared Owen’s photo via Instagram. [One commenter ](http://statigr.am/viewer.php#/detail/566037027050243067_507095783/ User jk_ruppy)responded to several comments, including an assertion that the buck was farm-raised. In addition to dismissing this claim, the commenter, jk_ruppy, said the buck sports 22 scoreable points and ranks in the top five all-time Ohio archery kills. The comment also identifies Wayne County as the hunt location and lists two different scores: a BTR (Buckmasters) score of 239 7/8 inches and a composite green score of 256 inches.

Ohio has historically yielded some of the biggest nontypical bucks on record. Two of the top seven Boone & Crockett Club nontypicals hail from the state, and the world record Pope and Young Club nontypical that measured 294-inches. That buck was taken in Greene County, Ohio in 2000.