Michael Charlton, 28, started this season like seasons past – scout, scout, and scout some more. Charlton had a piece... 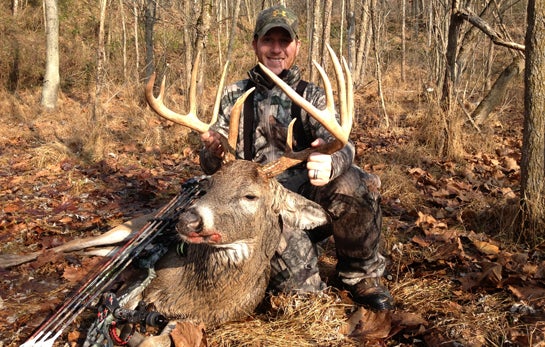 Michael Charlton, 28, started this season like seasons past – scout, scout, and scout some more. Charlton had a piece of private land that he hunted with his father in Westmoreland County, Pennsylvania. They kept hunting to a minimum and let bucks reach maturity.

Hunting the big boys isn’t easy and isn’t always fun. “It has been a journey the last few years focusing on chasing the mature deer only,” Charlton said. “I have seen a lot of deer, and some fantastic bucks that I let walk. There were for sure times of frustration as well.”

On November 9, however, Charlton’s time would pay off. It was a cold morning with temperatures in the low 20s and a heavy frost – perfect conditions for getting deer up on their feet. Just as the day was breaking, Charlton spotted a mature doe feeding nearby.

As he watched the doe feeding in a small clearing, Charlton could hear another deer walking in an extremely thick area. Charlton scrutinized the spot looking for a flick of an ear or piece of an antler, and that’s when he caught a glimpse of a giant rack. There was no question in Charlton’s mind that this buck was a shooter.

Charlton tried to stay calm and concentrate as the big buck moved in closer. As the buck approached an opening at 40 yards, Charlton came to full draw and anchored. On cue, the buck entered the opening and stopped, standing perfectly broadside. Charlton focused on the spot just behind the buck’s shoulder. As the buck looked back toward the doe, Charlton released the arrow.

The arrow soared through the air and hit its mark as the big deer bucked like a bronco and took off. As the buck barreled down into a valley, Charlton heard him crash. “That’s really when the adrenaline kicked in. I was shaking so bad after the fact. It’s that feeling that every true hunter gets and the reason I put so much into hunting,” Charlton said.

Once Charlton calmed himself down, he called his father to come help track the deer. He knew the buck was dead down in the valley, but he wanted to share this moment with his father. Charlton’s father wasn’t hunting that day and it would be a long three hours for Charlton until he began the search for his buck.

When his father arrived Charlton climbed down from the stand, and it didn’t take them long to find the arrow covered in blood. There was a great blood trail the entire way and as soon as they entered the valley, Charlton’s father yelled, “There he is! He’s a freaking monster!”

Charlton knelt beside the giant whitetail and wrapped his hands around its antlers. “The feeling of grabbing those antlers the first time is indescribable,” Charlton said. “So many different emotions all at once. A huge relief of knowing that year after year of 300-plus hours in the stands, the scouting, the hard work, the dedication and persistence paid off!”

Charlton estimated the buck to be 4.5 years old and the heavyweight tipped the scales at 170 pounds field dressed. With an inside spread of 20 4/8 inches and an overall green score of 161 4/8 inches, this is a buck that would be on any bowhunter’s hit list, especially in the state of Pennsylvania.