Neil Dougherty, a whitetail property consultant, can walk a deer woods anywhere in the country and point out stand locations... 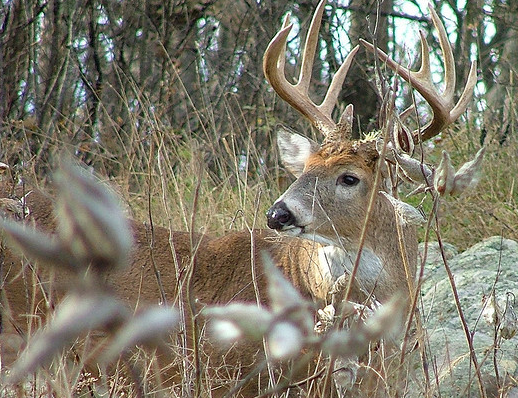 Neil Dougherty, a whitetail property consultant, can walk a deer woods anywhere in the country and point out stand locations before they even come into view. He’s able to do this because most deer hunters are predictable. We hunt the same funnels, saddles and field corners year after year.

The problem is that if Dougherty can pick off stand sites on a new property, so can a mature whitetail that has lived on the same stretch of land his whole life. A smart old buck will find a hunter’s stand and then walk around it staying just far enough away to go undetected. Because of this, one of Dougherty’s deadliest tactics is the setback stand.

How it Works
First go to one of your primary stands, a place where you know big deer frequent. Then walk downwind at least 100 yards to the first patch of thick cover, locate an area that looks like a buck will try to sneak through and hang a stand. In wide open timber, you’ll have to go 200 yards. After you have your first setback stand hung, go another 100 yards or so downwind to the next patch of cover and hang a third stand.

“It becomes a test of wills…Can you sit there long enough to wait out a mature buck?” Dougherty says.

When the time is right, he’ll give his setback stands one or two all-day sits. If he doesn’t get a chance at a big buck, he’ll switch locations and try a different area of his hunting property. But if you play the wind right, and the big guy is in the block of woods your hunting, there’s a good chance you’re going to get a crack at him on the first day you hunt the setback stand, Dougherty says.

Why It Works
The setback stand works because it takes advantage of a mature buck’s tendency to slink through heavy cover, just out of sight from hunters. Mature bucks will hang out around the periphery classic ambush spots us whitetail hunters like to frequent. These bucks want to keep tabs on the other deer in the area, but they do this by staying down wind and surveying the scene with their nose.

For the setback stand strategy to work, you have to be willing to accept the fact that a mature whitetail buck can pattern you as a hunter, Dougherty says. Given enough time, he can locate your stand location, figure out how you get into the woods, and how you get out—and then move around you.

Once you are able to make that mental leap of faith, setting up in thick cover void of any deer sign won’t seem like such a crazy idea.

Editor’s Note: Each year wildlife consultant Neil Dougherty kills more than 100 mature whitetail bucks. But rarely pulls the trigger. His clients do the trigger pulling on the hundreds of properties he helps them manage. His unique approaches to property layout and hunting techniques have been featured on TV, and written about extensively. He prefers to hunt whitetails on his home property in western NY where he manages to take more than his share of mature bucks but still measures his success by the success of his clients.