It just might be bowhunting’s most frustrating dilemma: How do you intercept a buck that refuses to move much until... 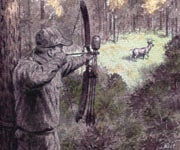 It just might be bowhunting’s most frustrating dilemma: How do you intercept a buck that refuses to move much until after nightfall? In some cases, and for our purposes, emphasis should be placed on the word “much.” Without question, these largely nocturnal critters will move during daylight hours. It’s up to us to figure out exactly when and where this will occur. These three ambushes are designed specifically for those nighttime prowlers that have a penchant for getting up and about during midday. **
**

****#1 – Grow an Ambush Plot:** **Mature bucks will avoid wide-open food plots until after dark, yet they can’t resist daylight trips to small plots in isolated pockets of timber. Create your own ambush hot spot by strategically planting shade-tolerant seed blends in mini-plots in thick cover or near known bedding areas.

When It Works: Try to concentrate your efforts during the middle of the day, especially if a cold front has recently passed through the region. A buck’s metabolism will force him to take on added nutrition before the rut kicks in, but he’ll put off serious feeding until other hunters have left the woods.

#2 – Hunt the Wet Spots: Contrary to popular belief, a water hole or natural spring can be a killer midday stand location throughout the season. An overall lack of moisture will obviously increase its attractiveness. Also, keep your eye on the thermometer. Daytime highs above 50 degrees will prompt deer to seek water.

When It Works: The pre-rut through the rut is best. When deciding whether to sit over a water source, first make sure deer are using it. Look for fresh tracks–old, dried-up tracks mean nothing. Cameras on trails leading to and from water can tell you what type of deer are there and when they’re visiting.
**
**

****#3 – Grow an Ambush Plot******:** Recent studies have shown that the majority of scrape activity takes place after nightfall and during the midday hours, especially in heavily hunted areas. That’s why you should hunt mock-scrape setups from about noon until two or three o’clock.

When It Works: Beginning in the pre-rut (mid-August), construct multiple mock scrapes near high-traffic areas like current food sources and travel corridors, and along the edges of known doe bedding areas. Add scent as needed. Point your trail cameras toward the center of each scrape and let the games begin.