Are We Killing Too Many Does?

Deer harvest numbers have been trending down in recent years and some hunters aren’t at all happy about it. While... 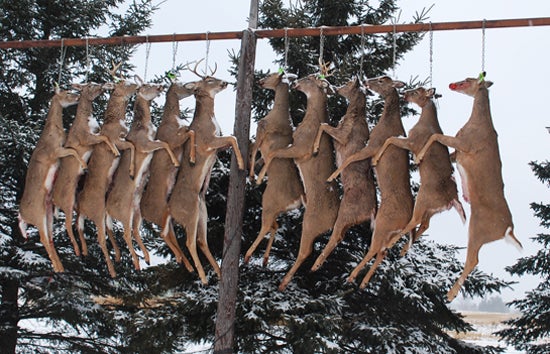 Deer harvest numbers have been trending down in recent years and some hunters aren’t at all happy about it. While deer herds are healthy and bucks are plentiful around most of the country, there are certain pockets where whitetails seem to no longer exist. “The deer just aren’t there” has become the battle cry of more than one sportsman’s group nationwide. As one Pennsylvania hunter lamented, “There were no deer when my grandfather was a kid, so nobody shot does. We grew the herd and were told to start shooting does; everybody had a pocket full of doe tags. Now we’re back to where my grandfather started. What the heck happened?”

That brings us to the question: have we killed too many does, or are other factors responsible for the decline in deer harvest numbers? Most deer biologists will point to multiple factors, which can contribute to declining deer numbers. And they will be right.

Deer Killers
At the top of the list would be doe mortality caused by hunter harvest and or deer-auto collisions. Kill a bunch of does and the numbers go down. Under average conditions a doe harvest of 20-30 percent of adult does will stabilize the herd.

Habitat plays a huge role in deer population dynamics. In poor habitat areas you can take 1 doe for every 300-640 acres without reducing overall herd numbers, in medium habitat it’s one doe for every 100-300 acres, and good habitat one doe for every 25-100 acres. That’s quite a range and clearly illustrates the importance of habitat to deer herd numbers.

Take too many does out of a poor habitat area laced with a large population of predators along a 4-lane highway and you have the makings of a “perfect storm.” Populations are almost guaranteed to plummet. Some populations have fallen so low that they are extremely difficult to bring back (especially in poor habitat and severe winter areas).

No wildlife biologist worth his salt will let you get away with hanging a crashed deer population on them. Most use elaborate (at least to this math challenged person) deer harvest models to establish harvest targets and truth be told, most of these models have served hunters well over the years. Especially when deer populations were being managed for growth.

Most of the pros feel they have it down to an exact science and in broad-brush strokes they often do. But the times are changing and so must the models. In some areas, the population models may have failed us especially when attempting to fine tune deer numbers to habitat capacity by reducing numbers significantly.
**
Population Model Problems**

Case in point, many models use buck harvest data from previous years to estimate the size of the deer population. But, in recent years many hunters have been passing young bucks in hopes of taking a mature animal. Mature bucks being the creatures they are, hunters wind up eating a buck tag sandwich instead of taking yet another forkhorn or six pointer. If the population model was built on buck harvest data from the days when hunters typically shot the first buck that came along, the population estimate may be grossly underestimated (which can lead to fewer tags issued and excessive habitat destructions, auto-deer collisions etc.)

Also, many models are based on a fawn recruitment index that was established back in the days before the proliferation of coyotes, black bears and bobcats. Today these predators are abundant in most deer states and they are a very real factor in population dynamics. Studies have shown that coyotes can gobble up more than 50 percent of newborn fawns if the conditions are right. If the model does not consider predation it may be grossly inflating herd size estimates.

The possibility of too many doe tags being issued for a given area is very real. But, no one is forcing hunters to squeeze the trigger. Ultimately it is the hunter who makes the final management decision to take the numbers down, leave them as is, or let them increase. Hunters can count, hunters can see if deer are eating themselves out of house and home and hunters can figure out how to impact herd dynamics. We can’t lay this all at the feet of the professional deer managers.

Are we killing too many does? In most instances no. Most of the country’s deer hunters are enjoying great deer hunting thanks to sound deer management by state agencies. Have deer numbers been reduced to the point in some areas where a deer sighting is a rare occurrence where deer were once plentiful? Yes they have. Have conditions on the ground changed to the point where we need to modify some of our management practices? Absolutely.

If there were a real villain here, it would have to be the broad-brush deer management practiced by many state wildlife agencies. It worked fine in the days when everyone was trying to increase herd size but when the mission is taking numbers down and fine-tuning herd size, broad-brush strokes are a little messy. This is especially true when in many states hunters are contributing to the problem by not reporting their deer kills. Good management comes from good data. There are too many factors in play and it’s too hard to keep track of changing conditions on the ground.

Exactly how we get to that point is another topic for another day.