Hunting with deer bait presents its own challenges 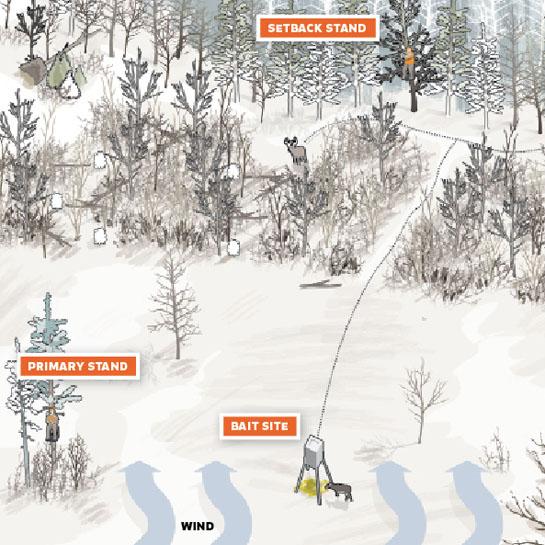 Hunting over a pile of corn as deer bait is the strip-club bachelor party of deer hunting tactics. Almost every guy will do it if given the opportunity (and it is legal in many whitetail powerhouse states like Texas, Wisconsin, Kansas, and Ohio), but it’s not exactly something you brag about. And of course there’s the argument, usually presented by hunters from no-bait states, that hunting deer over bait is too easy.

And maybe it is–if you’re happy shooting 2 ½-year-old bucks every year. But if you want to take a mature buck over deer bait, you have to work just as hard and smart as no-bait hunters. Recently, I conducted an informal survey of 13 outfitters from around the country who all utilized bait last year. Combined, they killed hundreds of deer in the 2012 season, but of all the mature bucks taken, fewer than half were killed on a bait site. If you want to buck that trend this season, here’s a plan of attack for getting mature deer to take the bait.

The Setback Stand
Unless you’re lucky enough to hunt a large property with virtually no pressure, you’re probably not going to kill a mature buck over a pile of corn during the rut. Prowling bucks are going to circle downwind and out of sight. They’ll scent-check the area for does and danger. When the does leave the bait site, mature bucks will ambush them from the safety of thicker cover. If you post up at your bait site now, you’ll likely spot only young bucks and does.

This is the time to hunt a setback stand, says deer guru Neil Dougherty. Explore downwind of the bait site and look for the first trail through thick cover. Hang the setback stand downwind of this trail, during the middle of the day and before the rut starts. In dense woods, you should start looking for a spot about 100 yards away from your primary stand. In more open timber, you might have to go 200 yards or more. Play the terrain and find a location where wind currents funnel to a point and allow a buck to easily scent-check the area from safety.

Late-Season advantages
Several factors make this Dougherty’s favorite time to hunt over bait: Post-rut bucks are looking to pack on the pounds before winter sets in, but food is scarce, with cornfields cut and food plots browsed to the stems. And deer have fallen back into normal feeding patterns now that there are fewer hunters in the woods.

Hunt before winter storm fronts and on colder days. Temperatures 10 degrees below average and light precipitation will push deer to feed earlier in the day. If you hunt smart, you’ll have a chance to take that mature buck as he makes his way to an easy meal.

Insider Tip: Killer Kernels
Deer that quickly shift from a high-fiber diet of woody browse to a low-fiber, high-carbohydrate diet of corn can develop a condition called lactic acidosis, commonly known as grain overload. A sudden spike in carbs can drop the pH in a deer’s rumen. This can cause the blood to thicken and vital organs such as the heart and kidneys to shut down. If you do bait deer, introduce corn or other grains before the season and gradually wean deer off of it when the season ends.