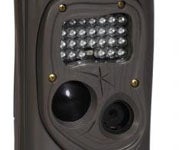 Cuddeback recently introduced the Ambush IR trail camera. The new Ambush IR features an extremely fast quarter-second trigger speed and Cuddeback’s Centered Subject Technology, which ensures the camera is triggered when the animal is in the center of the picture, rather than just by entering or exiting the frame.

The Ambush IR is a five-megapixel compact trail camera that operates on eight “AA” batteries, and can last up to six months (or 10,000 photos) on a single set of batteries. This is important for trail cam users because the less time you spend in the woods replacing batteries, the less scent you leave behind to educate the deer.

Some infrared cameras can have a tendency to wash out night images, leaving you with blurry images. Cuddeback’s Ambush IR combats this problem by reducing infrared flash washout while providing consistently even IR illumination for crisp IR images.

One feature the Ambush IR is lacking is some sort of time-lapse mode for watching food plots or open fields. Many of the newer trail cameras on the market have this feature and it’s helpful for hunters who want to see what’s moving through their food plot all day long (including at distances outside of the camera’s trigger range).

What a lot of hunters will appreciate about the Ambush IR is the simplicity of its controls: a switch, two buttons and a rotary knob operates everything the camera can do – now that’s easy! The Ambush’s test mode allows you to walk in front of the camera to test the camera’s aim. With the rotary knob on Test Mode, the camera test light will blink when you are sensed, identifying when it would take an image.

The new Genius Mount System makes it super easy to check the trail camera without having to crouch down to mess with it: The camera mounts to the tree by first mounding a bracket to the tree and then simply sliding the camera in place. The downside is that this also makes it easier for thieves to steal your camera, so you might want to ditch the Genius Mount System for a steel box that lag bolts to the tree and has a shrouded lock.

Another great feature of the Ambush IR is that the camera will continue to work without a memory card, storing photos and videos on its 60 MB of internal memory in case you forget your SD card in the truck or back home. The Ambush uses SD cards up to 32GB.

With one of the fastest trigger speeds on the market and Centered Subject Technology, the Cuddeback Ambush IR will help you scout this summer and pattern those big weary bucks just in time for hunting season.