Urban life for a highly-driven gun dog isn’t an easy adjustment. Here are some things every owner should consider before picking a breed 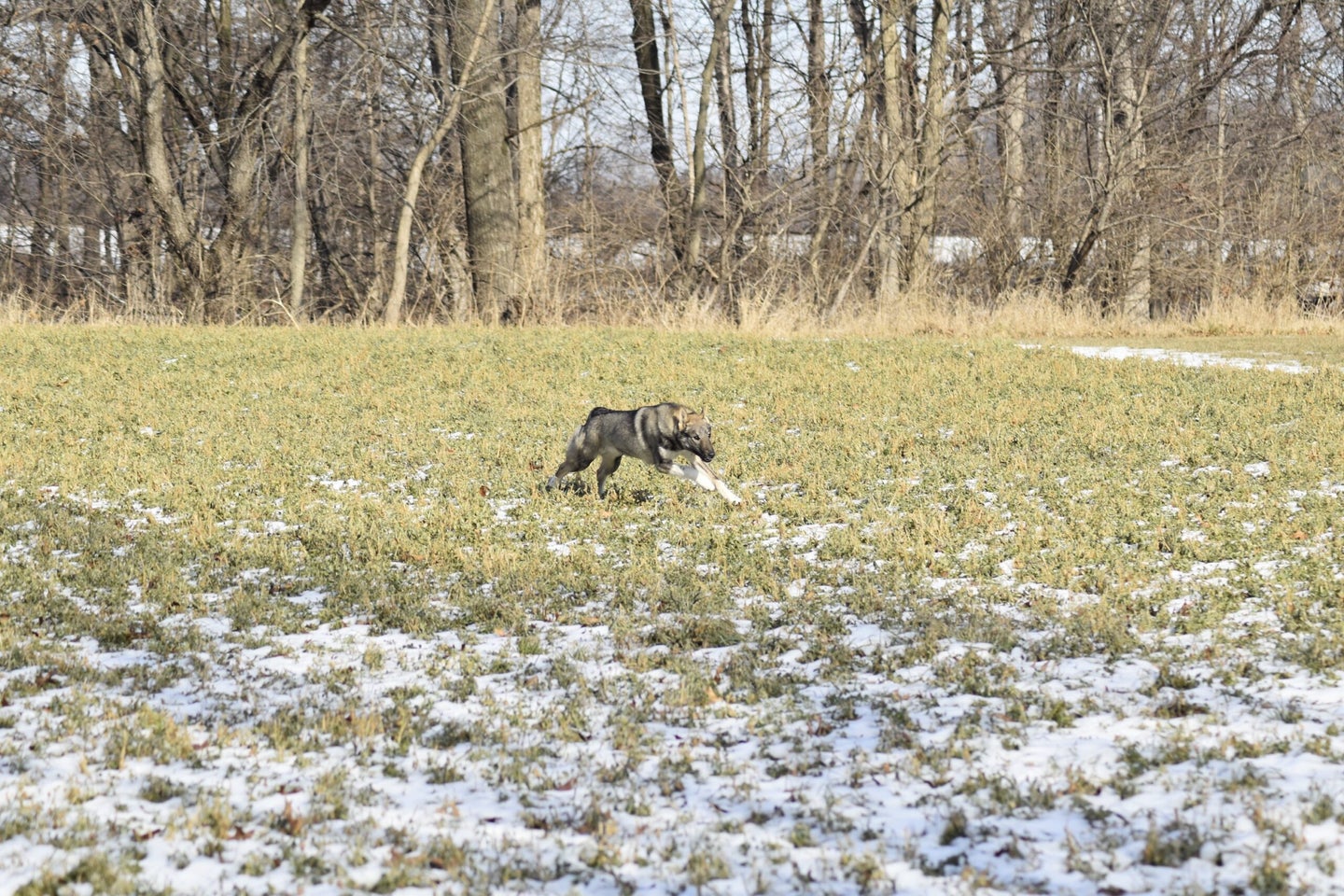 Hunting drive in a dog is great, but you may need to tone some of it down if you want your dog to live a happy life in the city. Joe Genzel
SHARE

One of the fatal mistakes many first-time gun dog owners make is failing to gauge how much prey drive their hunting pup has before making the decision to bring him home. This is a non-issue for country-living folks who have acres of property for a dog to roam and explore. But if you live in a suburban neighborhood or a city apartment, you could have a serious problem on your hands—if you’re not prepared.

Some gun dogs can handle a studio apartment in New York City or a confined dog run in the ‘burbs. But many of those breeds can only do so after proper training and while sticking to a strict exercise schedule. Other dogs simply don’t have an off switch. They must almost always be hunting, and if they can’t, they’re hell to deal with. If you’re buying your first gun dog or training a new breed for the first time, you need to consider that dog’s lineage and then decide if the place you call home is right for that particular pup.

Here’s how to ensure you choose the proper breed for the living situation you are in and what to do if that dog turns out to have an endless prey drive that can’t be turned off.

You have to consider the historical attributes of the dog breed you are interested in buying before you ever make that purchase. For instance, American Labs are considered to be a much more high-energy breed than British Labs. The Brits have an off switch; American Labs often do not. My latest pup is a West Siberian Laika. His prey drive is extremely high. He cannot stop treeing squirrels, rabbits, raccoons, and possums once I take him off-leash. I also live in a typical suburban neighborhood, which makes having a dog that is always on the hunt a challenge. I knew that going into it, though I wasn’t totally ready for that amount of drive.

You need to think about where you live and if it’s feasible to house a dog in that environment. A pure-bred Laika could never live in a city apartment, nor could most well-bred English pointers or ankle-biting Brittanys because of their insatiable need to hunt and be active. But a German Wirehair could, because those dogs are known for chilling out when they’re at home. You just need some perspective on the breeds that are right for you if you’re in an urban area. So do some research and find a dog that can hunt, but can also sleep at the foot of your bed all night without barking every five seconds.

Laika’s are a primal breed. They are as close to a domesticated wolf as it gets. In ancient times, their owners let them live in the brutal winter cold of Siberia and the dogs had to hunt for themselves if they wanted to make it through to the spring. Those bloodlines run through my dog. Other than the occasional meat scraps, my pup’s mother does not get fed by her owner. Instead, she must hunt for her meals.

My pup will not stay inside even when it’s -20℉. I worried about him the first night the temperatures dipped so low, but when I got up the next morning to feed him he sprung out of his dog house and was warm to the touch. He digs shallow dens next to the foundation of our house, stalks and kills birds and mice, and I’ve clocked him running over 25 mph. With all those attributes it probably doesn’t seem feasible for him to be living in a fenced-in backyard, and I won’t totally disagree with you. But I wanted this breed of dog and I’m willing to do what it takes to keep him content.

Most new dog owners don’t hold such a perspective. They think about how a dog can best serve their needs, not what’s best for the animal, or if it will be happy living in the space it’s provided. Now, admittedly my backyard is not the optimal space for a Laika, but I knew that and put a plan in place (and later adapted it) to make sure he will live a good life. That includes hunting squirrels almost every day of the year, whether I am following behind him with a gun in my hands or not. It’s not up to a highly-driven gun dog to automatically adapt to your living situation. You have to provide the tools for him to become well adjusted.

Dogs that can’t easily turn prey drive on an off, have to be able to hunt consistently. That can be tough when you live in an urban area. There is an abundance of small game around my neighborhood, and a nature preserve right down the street where I can turn my dog loose and let him hunt. There’s also a golf course nearby that we hit in the morning and evening to chase squirrels. Plus, my parents have an 80-acre farm 30 minutes from town.

With all that access to prey and open spaces, I decided to buy a Laika. If you live in a city, consider where you can go for daily exercise and training. If you have a high-drive bird dog, where exactly are you going to introduce and keep that dog on birds? Or, if you buy a coon dog, where are you going to get that dog on raccoons? Dogs need to be around—and trained for—the quarry you intend to hunt. Make a plan to ensure that happens on a regular basis.

Exercise the Hell Out of Them

High-drive dogs need physical activity. My dog, Vladimir, and I go on a two-mile run every day, and longer in cool weather. At least three times a week I take him to the golf course to air him out or play fetch to burn more energy. I am trying to get him to retrieve as well, so it’s a good training opportunity. He also lives outside and has a half-dozen toys and bones occupy him during the day. I also inject short play sessions throughout my work day, typically pairing obedience drills with a game of fetch. Or we do some playful wrestling, which really tires him out.

If that seems like a massive time suck, it is. But it’s a fair price to pay for the dog I wanted. This could be your reality, too. If I didn’t do these things, my dog would be miserable. Don’t bring a prey-driven dog home unless you’re willing to put in this kind of effort. If you’re not, get a dog that can walk the line between hunting and hanging around the house.

Read Next: Are Hunting Dogs Better When Kept Indoors or Outdoors?

So many gun dog owners just want to get their dogs hunting, and bypass obedience training. I did this with my dog, so I get it. Squirrel season was already in when I picked him up from the breeder and Laikas are capable of hunting at just a few months old (Vladimir treed his first squirrel at three months). We hit the woods, and he was obedient because that’s where he is comfortable and there are no distractions except for the quarry we are after.

But at home, he was the complete opposite: disobedient and running away every time I took him off-leash. And you can’t allow that in an urban gun dog (or any dog for that matter). There are too many dangers—mostly cars—and too many humans who are intolerant of an unleashed dog.

Make sure you train your dog to sit, stay, and come before doing anything else. I started Vladimir off on a long check cord during our sessions in the yard. When I felt like he had mastered all the commands with the cord attached, I introduced an e-collar. From there I collar-conditioned him on leash, and eventually started training him off-leash with the e-collar. I needed to be able to control him off-leash during our golf-course squirrel hunts in case we ran across dog walkers or a twilight golfer. He also has a propensity to chase deer that I am trying to break, and an e-collar is a critical tool for that. I also wanted to keep him safe from any potentially dangerous situation, and make absolutely sure I had full control of him around small children. He can easily knock a kid to the ground and think it’s playtime, and that’s unacceptable.

The good news is that all this work is incredibly rewarding. I don’t regret choosing a driven hunting dog. Because after all the exercise and obedience training, we get to do what we both love best: we get to hunt.