How to Take Good Photos of Your Dog 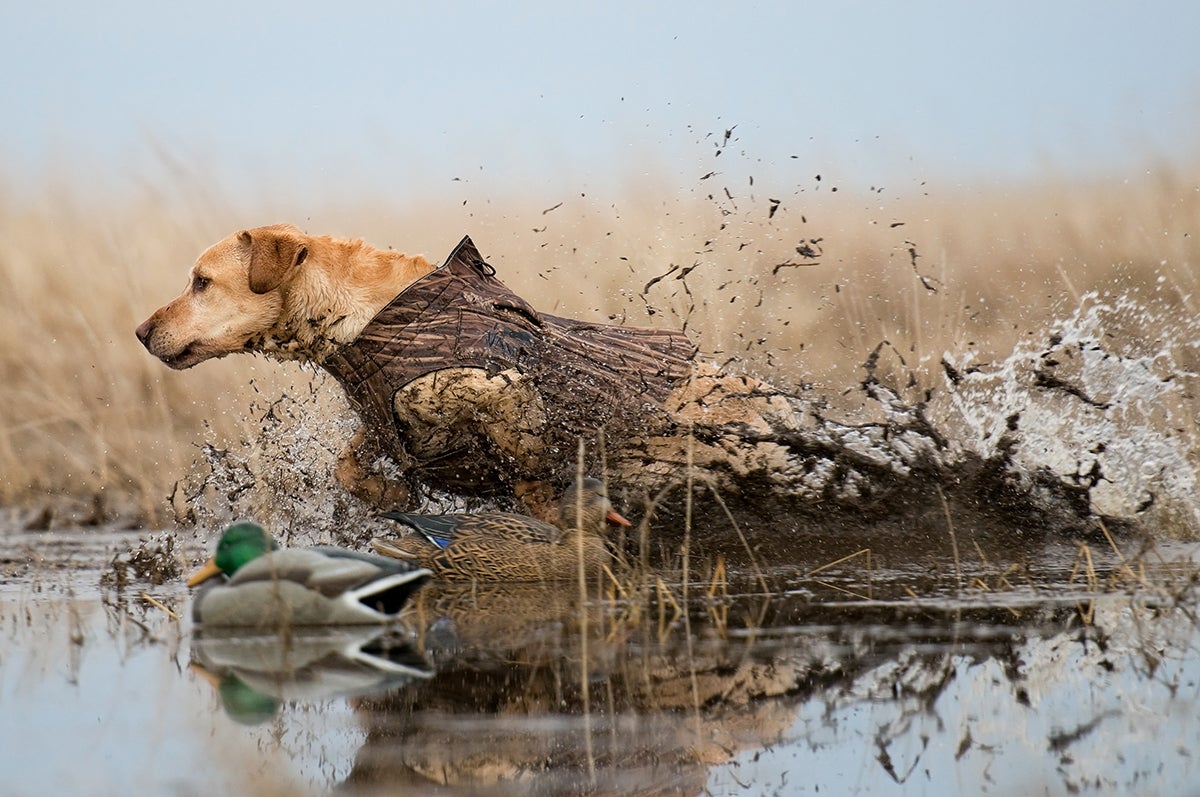 Most hunters think of photographing their dogs only after a hunt’s over. Which is too bad, because how many pictures of a dog sitting behind a row of dead geese or pheasants can you enjoy before they all start to look the same? If you’d rather not bore your friends and instead capture your dog’s athleticism, intensity, and personality, there are a few simple tips and tricks you can follow.

I’ve shot photos of sporting dogs for years, capturing images that have run in all the biggest outdoor publications in the country. Here’s my guide on how to take good photos of your dog.

Take Photographs of Your Dog During the Best Light

The key to taking good pictures of your dog is to shoot during the first and last hour and a half of daylight, when the sun is low to the horizon. Yes, that means sometimes trading your gun for a camera, but your retriever is never going to look better than when he’s locked on to incoming birds and anticipating guns going off. A pointer will never look as intense as he does snuffling in hot bird scent just before sunset.

If you have a DSLR camera, get into the habit of adjusting your camera’s settings before you go out, so you’ll be ready to take pictures as soon as an opportunity arises. For instance, to take pictures at first light, a waterfowler should have his lens aperture wide open and the ISO setting dialed high enough to where he can get sharp pictures handheld. For a stationary dog, that means having a shutter speed of 1/125th to 1/250th of a second, while 1/500th to 1/1200th of a second is needed to freeze a moving dog. Be sure to check your pictures on the camera’s monitor regularly to confirm things like proper exposure and picture sharpness.

Under light to medium overcast skies, you can shoot pretty much all day in any direction and get good photographs. But to take advantage of low-angled light (golden hour) on clear days. It helps to strategize. Consider shooting toward the sun before it clears the horizon at first light or right after it sets. You will get beautifully colored soft light that will rim light your dog’s fur while still capturing every detail in the shadows. During the first or last half-hour of direct sunlight, think about side-lighting your dog for a more dramatic look, and as the sun gets higher and more intense—and shadows become more pronounced—keep the sun at your back. Open shade will allow you to shoot good pictures even when the sun is high, which is why I love shooting Labs in flooded timber. But you’ll know the light is too harsh for good photography when your dog’s eyes look like black holes.

Focus on Your Dog’s Eyes

Eye contact is how we connect. Eyes convey emotion, and with hunting dogs in particular, they show intensity. If a dog’s eyes are out of focus or look like black holes, the picture will appear lifeless. Make sure there’s a pronounced highlight in at least one eye. With retrievers, anytime they’re looking up for birds, their eyes will reflect light in even overcast and low-light conditions. For pointers, shooting from a lower angle will help capture that critical reflection of the sky.

Shoot from a Dog’s Eye Level and Below

Catch lights aren’t the only reason to photograph your dog from a low angle. Down low is where your dog’s world exists, so take pictures from his perspective. It’s inherently more interesting than from a standing-person’s viewpoint. Low angles will also emphasize his physical conditioning and intensity, so get in the habit of shooting from a kneeling or prone position whenever you can. Sometimes a low shooting position is the only way to prevent a dog’s head from blending into the horizon or distant tree line.

Get in the habit of moving around for different perspectives, light direction, and backgrounds. If you stay in one position, all your pictures will look the same. Shifting even a foot or two in one direction can enhance an image by including something that helps draw out a sense of place—like decoys or a hunter calling behind a Lab—or by excluding a distracting element. Nothing destroys an otherwise pretty picture of a dog on point than a sunlit, out-of-focus strand of grass crossing his face, or a tree limb or corn stalk sticking out from behind a Lab’s head. The more deliberate you are in deciding what to include or exclude, the better your pictures will be. For better compositions, study pictures in your favorite publications; you’ll quickly learn the aesthetic appeal of the Rule of Thirds (as opposed to placing your dog’s head in the middle of the frame).

There’s a reason my Lab was yellow, other than the fact that she blended into the fields and vegetation I typically hunt: because black (and white) dogs aren’t easy to shoot. As a photographer, I wanted to maximize my opportunities for good photographs on any given day, be it clear, foggy, or even dark overcast. Annie’s beautiful orange coat was perfectly mid-toned (as are most chocolate Labs), meaning if I exposed properly for the general scene, she would never be overexposed or underexposed. While there is nothing more beautiful than a wet black Lab in perfect light, perfect light is usually short-lived. In soft, diffused light, black Labs glisten like no other dog, and during the first hour of daylight or in the open shade of flooded timber, they’re a joy to photograph. But in direct, intense sunlight, and under any dark, overcast sky, black unfortunately goes, well, black, and you lose all that fur detail a good dog image normally requires.

While today’s digital editing programs are phenomenal in recovering lost shadow and highlight details, don’t pass up ideal lighting if you want great pictures of your black Lab. For upland bird-dog owners who’ve experienced the problem of photographing dogs with predominantly white coats, and having all the hair details burn out in direct sunlight, be sure to take advantage of diffused light, like those misty Southern mornings, and pretty much any overcast day.

Pointing dogs are way tougher to photograph in the field than retrievers, since focusing on a dog running through woods or tall grass is a challenge, and wild birds won’t typically stick around while you photograph a dog on point. If you want to capture the grandeur of a solid point, from all sorts of angles, you’ll probably need to stage it with planted birds. I get to photograph some of the best-trained pointers that are rock solid and intense even with a camera clicking away, but even they have their limits.

For most dogs, having a stylish, high tail and ears up will require that they can either smell the bird (which may position them facing away from the sun) or at least sight-point it. Some dogs can be repositioned to orient them toward the sun, but yours may not tolerate being handled and still stay staunch, in which case a sight-point is your best option. Your working distance will depend on how close you can be without becoming a significant-enough distraction to cause the dog’s intensity to flag or make him break point. Regardless, make as little noise as possible when moving around. Do not talk. That’s the fastest way to kill a dog’s concentration and intensity. Training sessions can be a great time to photograph any hunting dog provided you’re not setting back his progress for photos.

Chronicle Your Dog’s Life at Home

For most of us, dogs aren’t just hunting tools; they’re part of the family. So photograph every part of your dog’s life: puppyhood, playing with your kids, retrieving dummies, pointing robins in the backyard, sleeping at your feet. Thanks to cellphones, capturing life’s little moments is a breeze, not just because you can get good pictures in almost any light, but because your phone is rarely out of reach. Don’t forget your phone’s awesome video capabilities, too, as that’s often the best way to capture a dog’s energy and personality.

While you may have to shore up a pointer’s posture or tease up a flagging tail, never manhandle, force, or get frustrated when a dog doesn’t give you exactly what you want. You’re asking him to do something he’s not trained to do, and rough handling will not only confuse him, but erode his confidence and style. Either put him on a check cord and reposition the bird for him to locate and point again, or put him up and try another day. Plan your photoshoot early or late in the day when it’s cool. A panting dog with an open mouth will not look stylish. As a general rule, all hunting dogs look their best with ears up and eyes laser focused.

Most of our hunting dogs are not field trial champs, and frankly, most of us don’t care. Whatever your dog’s abilities, there will be certain things he does, either afield or at home, that truly resonate with you. These are the things that make you smile. Photographing those moments should be at the top of your list. My little Lab, Annie, was great in the field, and I have lots of pictures of her retrieving ducks and geese. But the photograph I most cherish is of her sitting on my front porch, holding one of my socks she’d retrieved from my dirty-laundry pile, which is something she did every morning from the day I got her. It may not show off her athleticism and predator drive, but it sure captures her obsession with retrieving anything that would fit into her mouth. Which, aside from her obsession with food, perfectly encapsulates her life story in a single picture. To see more dog photography from the author, check out his website at: billbuckleyphotography.com