How to Kill the Toughest Ducks and Geese 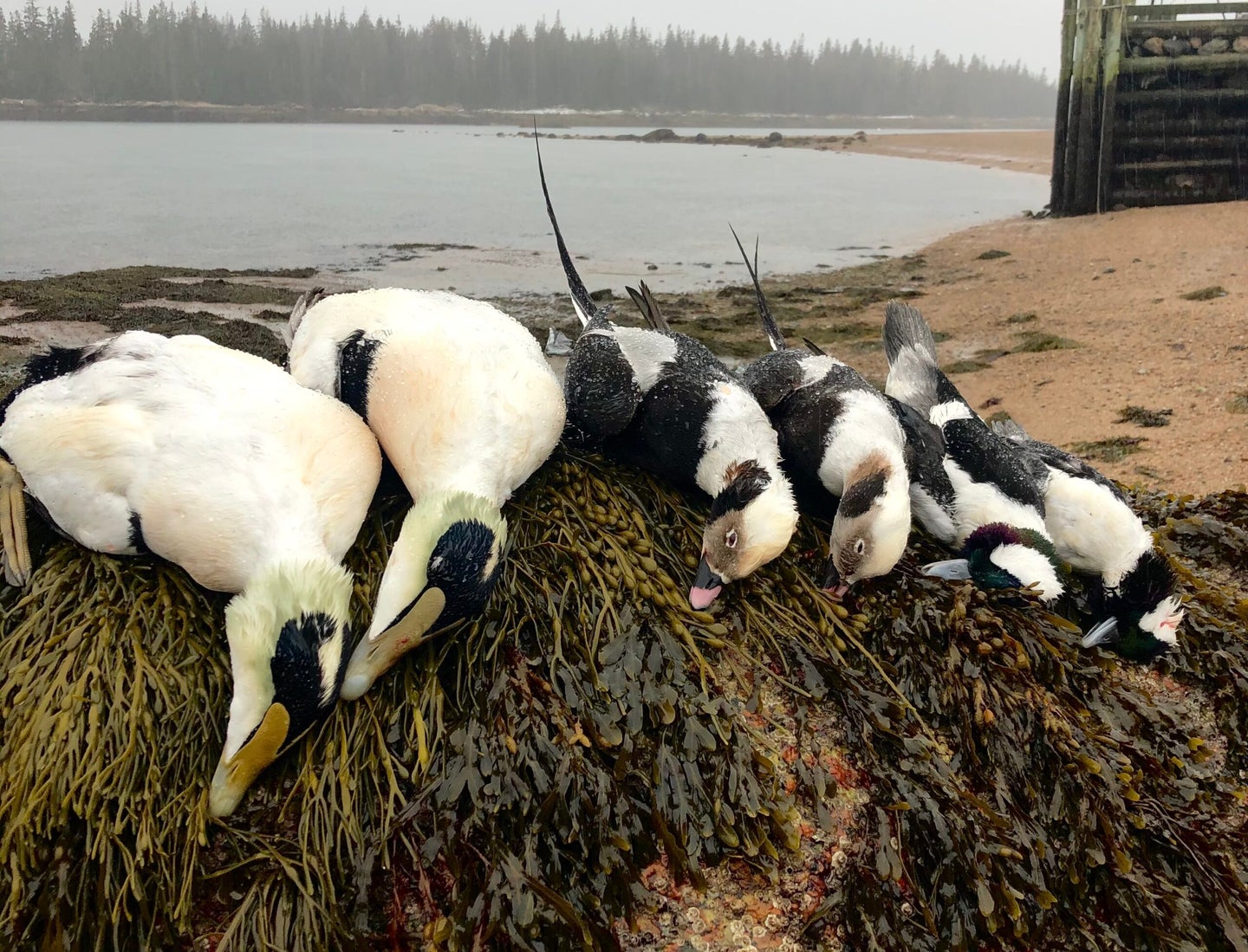 Common eiders. long-tailed ducks, and buffleheads have a thick layer of fat that will repel shoshell pellets. Alex Robinson
SHARE

When other hunters talk to me about how hard some big game animals are to kill, the first thing that pops to my mind is that they have probably never tried to shoot a bufflehead flying mere inches off the surface of a white-capped bay on a cold December morning.

Divers, sea ducks, late-season mallards, and giant Canada geese are some of the toughest critters we hunt in North America. Much of the conversation around effectively killing these birds revolves around shotshell selection.

Some hunters use the fact that they shoot bismuth or tungsten as an excuse to shoot at farther birds and take iffy shots. They don’t consider a bird’s biological makeup, its ability to escape if crippled, or their hunting setup for a particular species.

Ultimately, a waterfowler’s skill as a shooter and their decision on when to shoot are the key factors in making clean killing shots. Here’s how to improve both on the toughest waterfowl we hunt.

Divers and seas ducks fly fast and low, have thick down feathers and a layer of fat that repels pellets (I have found BBs stuck inside the fat of bluebills, long-tails, and common eiders when cleaning them), and have an innate ability to survive if crippled. Because they fly fast and low, not as much of their body is exposed, so more of your shot misses them than if they were backpedaling over the decoys like a puddle duck.

Most diving and sea duck hunts take place on big water, like ocean bays, rivers, or the Great Lakes, from a boat blind or layout boat. Both types of shooting are difficult. For instance, I’ve layout boat hunted off Long Island in 1- to 2-foot seas. You lose sight of the birds when you go down into the bottom of the swell, then when you rise to the top of the wave, the birds, some of which are smaller than a softball, are nearly past you, flying 60 to 70 mph. It’s a perfect storm for taking poor shots.

The same goes for boat blind hunting. It may not seem like you’re moving that much because you’re sitting in a bigger vessel than a layout. But shooting a duck that’s whizzing by as you rock in a boat is hard.

In both situations, you must consider what constitutes a good shot. If you’re not used to shooting in either scenario, the load in your gun isn’t automatically going to make you a more effective killer. Take shots that you’re comfortable with (this will be different for individual hunters), and don’t force low-percentage shots.

Head shots are best, but that’s no easy task. You really must lead them more than any other bird because of their speed.

Most sea ducks and divers are going to take a body shot and need a few follow up shots on the water before they’re dead. At this point, they become an even smaller target because much of their body is under water, and they will likely dive, only coming up for a quick breath before going under again. I like to aim at the base of the duck’s neck and fire, just like it’s a turkey. It’s easy to shoot in front of and over the top of birds on the water. Take the time to line up the first shot as best you can. Don’t get frustrated if you miss, and keep shooting until the bird is dead.

When you cripple a diver or sea duck, and it swims beyond shotgun range, you must act quickly, fire up the boat motor, and go after it (if you’re in a layout the tender boat is in charge of this). Crippled sea ducks and divers will dive underwater and reappear for only a moment to breathe. The smart ones stay under for 30 seconds or more, and never pop back up in the same spot twice. It’s good to have at least two shooters in the boat (one at the bow, the other at the stern) to cover more water.

For chasing cripples, the ammo you’re shooting does make a difference. You should carry smaller shot, because you will be closer to the ducks, and it will give you a denser pattern.

In December and January, Canada geese and mallards are similarly hardy, though not as tough as divers and sea ducks. Their down feathers and fat thicken with the cold weather, and that makes them tough to kill. I’ve seen both species get shot multiple times in one volley and sail off hundreds of yards before going down.

Later in the season, you want to take more premium shots on these two species. Straight up shots or when a bird is landing in the decoys are best because their vitals are completely exposed. Crossing shots are good too, just be ready to take more than one even if you hit the bird. Pulling the trigger when a honker or greenhead is flying away from you is a fleeting attempt at best and will almost never end in a kill unless you aim slightly under the bird and connect with the breast or head. But that is a hard shot to make, particularly at distance.

Where you hunt makes a big difference too. I shoot better hunting from a familiar blind. The birds work the same way and fly similar patterns, so I know what to expect and the types of shots I will need to take. That’s not the case when I go somewhere new. For example, I hunted California with buddy John Gordon of Ducks Unlimited recently. All our hunting was done from sunken pits in levees with water on either side. That meant birds could land and be shot in front or back of us. The birds were also flying in from all different directions.

It was tough shooting at first, because we were trying to stay hidden below the top of the blind, but also trying to see where the birds were coming from while navigating around a small stool in the middle of a shooting port. Plus, there was always fog on each of our hunts, so birds would be on top of us quickly and then vanish into the mist. I decided to limit my shots to birds in the decoys or ducks straight overhead. As the morning wore on and the fog lifted, I felt more comfortable extending my range because I had a better sense of how the birds were flying and what to expect from them when they worked our decoy spread.

On big lakes or rivers, I limit my shots on late-season ducks and geese to 35 yards. It’s so much easier for cripples to escape because of the size of the water, and in the case of river hunting, the current. And remember, even the best dogs can only go so far in big water on frigid days. Send them too far, and they could drown.

Small water, like potholes or cattle tanks, have a lower chance of losing ducks because you can shoot across most of them. But in flooded corn you can lose many mallards because they can escape into those tall stalks. Even if you have a dog, greenheads can evade them. So, you must kill cripples before they make it to the corn. Don’t send your dog right away if a bird is crippled. Try and finish it on the water. If it does make it to the corn, then send the dog.

It’s easier to find cripples in fields because you can see a bird fall much easier than if you’re hunting water (plus, it can’t dive). A good dog can retrieve a cripple several hundred yards away in a field. I can’t recall ever losing a bird field hunting if it fell in the field I was hunting. If a mallard or goose sails outside the field you are hunting, then the situation becomes more complex. You must get permission from landowners to access the other fields, which isn’t always easy or possible. Try to talk to your neighbors before the season and ask them if it’s okay to cross a fenceline if a wounded bird sails onto their property. This will save you time and up your odds of recovery.

A lot of field hunting is done from pits and if the birds are wary maybe only one hunter in the blind can watch the birds, particularly with big geese late season. The rest of the hunters are hunkered below, hoping they won’t be seen. When the blind captain calls the shot, you must quickly determine where the birds are and pull the trigger. This can make for sub-par shooting. Hopefully they are right in front of the pit, but if that’s not communicated by the blind captain, it’s impossible to know. Just like in sea duck hunting from a layout, you must make a snap decision as to whether you’re making an ethical shot.

Read Next: It’s Time to Stop Hunting Ducks So Damn Much

Your Shotshells Matter, Just Not as Much as You Think

Ever since the lead shot ban in the late 1980s, North American waterfowlers have been looking for a better way to kill ducks. Early steel loads were notoriously ineffective. But when ammomakers added more speed to steel it became capable of killing ducks at reasonable distances. In recent years, bismuth and tungsten have become relatively affordable and duck hunters have started using both non-toxics since each is denser than steel.

There’s been an extensive debate over waterfowl crippling rates, much of which has been surrounded by shotshell technology.

I’ve shot ducks and geese with straight steel, bismuth, and tungsten, as well as blended and stacked variations of those metals. I’ve seen all the loads kill and cripple birds. I’ve lost wood ducks with tungsten 4s, and pulverized Canada geese with steel BBs. The reason why you see that disparity is because there are many factors that contribute to a good or bad shot beyond the ammo.

Bismuth and tungsten are more effective for killing ducks than steel, and if you can afford either, you should shoot them. But know that there’s more to killing ducks cleanly than shotshell technology. It’s time we as hunters step up and account for the shots we take on ducks.

In all the hunting scenarios I laid out, higher density shot will help you cleanly kill a bird better than steel. But no matter what load you choose, you should pattern your gun. Just know that impact points are bound to change when you’re shooting from a boat rather than flat ground, and your shot pattern can be different when you’re swinging on a bird as opposed to shooting a shotgun from a lead sled.

The key to cleanly killing the toughest waterfowl is to understand duck habits, behavior, and choosing good shots while passing the bad ones. This knowledge will reduce crippling rates far more effectively than simply loading a gun with expensive ammunition. Know your abilities with a shotgun and and stay within those limits when you’re hunting.