How to Get Out of a Wingshooting Slump

When you can’t seem to hit a single dang bird, these tips will save your hunt 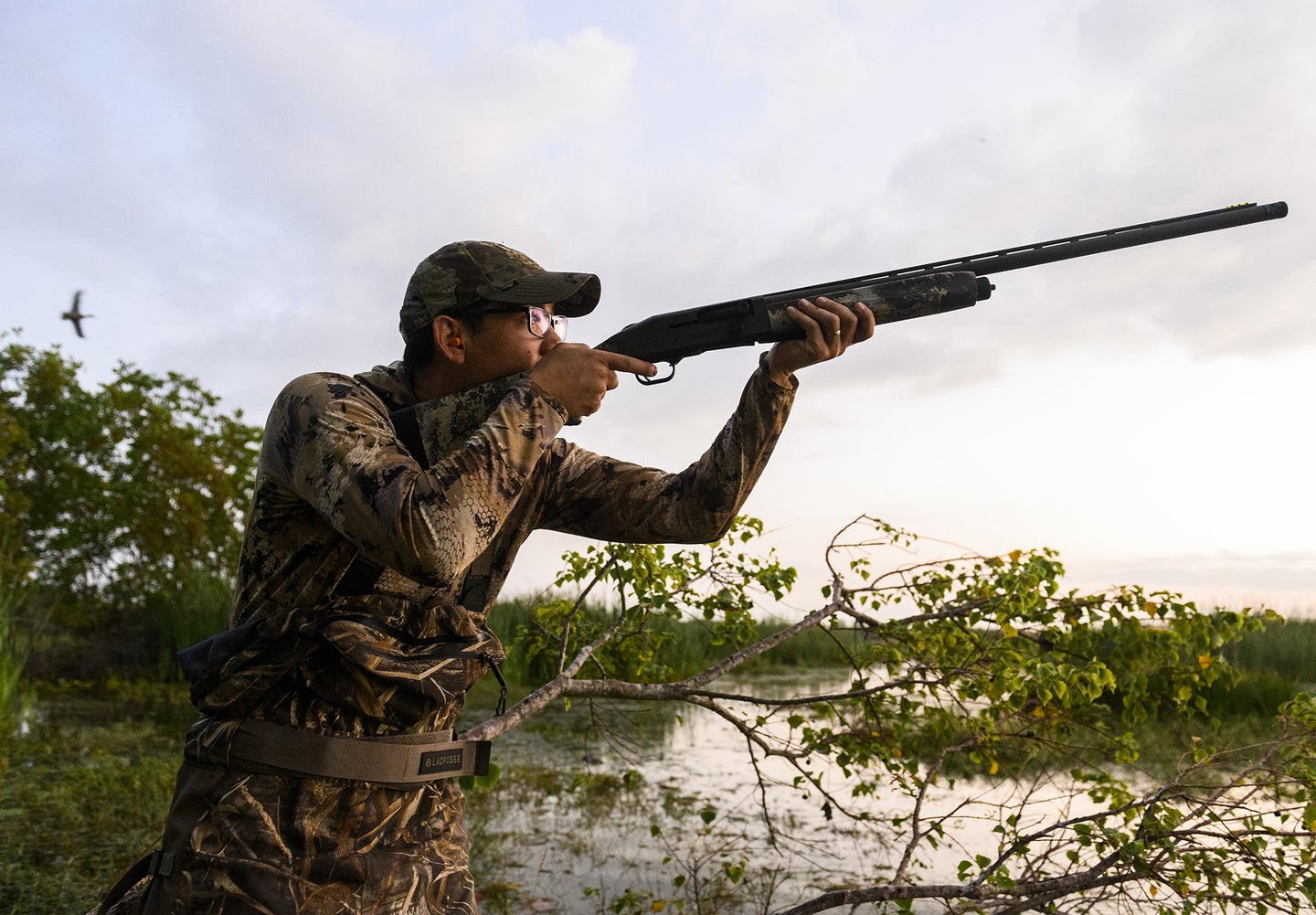 Slumps, meltdowns, the yips, or just plain bad shooting. No matter what you call it, you’ve probably seen it happen in the field. All of a sudden, an average (or even excellent) wingshooter can no longer hit birds. And the more opportunities he gets, the worse his shooting becomes.

I’m not to proud to say this very thing happened to me recently. The plan was to sneak in a quick evening wood duck shoot after work. As soon as I slammed my laptop shut, I hurriedly grabbed a handful of shells, stuffed them in my pocket, and jumped in the truck. When I paddled out to my spot, I flushed about a dozen woodies, and then a large flock of teal. As I tossed out decoys more ducks stirred about the marsh. Soon there were hundreds of ducks whizzing overhead. I seemed to be the only one hunting. This is going to be quick, I thought.

The first pair of teal came in perfectly and I killed the first and whiffed on the second. Then a drake wood duck whipped by, crossing left to right, and I missed him—three times. I did a quick count of my shells and realized I only had 10 left. Still enough to get it done, I thought, convinced I’d end the hunt with a limit. Then a dozen wood ducks squealed right into my spread, and I missed them all. I unleashed an unholy string of cuss words and reloaded, only to keep on missing and keep cussing until I was out of shells. I dug into the bottom of my blind bag and found some crusty old goose loads and missed with those, too. My saving grace was that the only one around to witness the atrocity was my dog. She just sat there quietly in disgust.

On the drive home, I vowed to never have such a meltdown again. If you begin sliding into your own missing slump, here’s how to pull yourself out of it before you run out of shells.

First, stop shooting. Continuing to hammer away only wastes ammo. If you’re hunting with experienced buddies, they’ll surely be heckling you by now like drunken Red Sox fans after the opposing pitcher just walked the batter with bases loaded. But if you swallow your pride and ask them what you’re doing wrong, they can also help get you back on target. Sometimes even a simple observation, like ‘You’re not getting your head down on the gun,’ or ‘You’re shooting behind them,’ is all the correction you need.

If you’re hunting by yourself, a self-assessment is tougher. If you miss, visualize the picture of your target at the moment you shot: Can you remember seeing vivid detail of the bird’s head? Were you behind the bird at the shot? Did you stop your swing? If you can’t answer any of these questions, you’re spraying and praying, not shooting with awareness and intention. To be a good wingshooter, you must be able to own a miss, understand it, make a correction, and then move onto the next shot.

The other key is to avoid frustration and focus on mechanics. Last year OL Shooting Editor John B. Snow interviewed pro skeet shooter Vincent Hancock after Hancock avoided a meltdown of his own and went on to win gold in the Tokyo Olympics. During the heat of a high stakes competition, Hancock keeps his mental game sharp by thinking solely about his shot process. Hunters can do the same.

“If you do what you need to do mechanically speaking, you’re going to break every single target,” says Hancock. “Don’t think about all these other crazy things in your head, just think about the process. It’s very, very simple.”

I have an unfortunate habit of not always getting my cheek down on the gun before shooting. This causes me to shoot over birds, especially on close shots with ducks dropping into the decoys. I can usually catch this mistake and correct it after a miss or two.

But bad gun mounts happen for all sorts of reasons in a hunting scenario. Waterfowl hunters will often get their stock caught up on a heavy coat or they’ll have their gun pressed awkwardly against a wader buckle. Upland hunters will rush their gun mount when surprised by a flushing bird. During the excitement of the moment, it easy to brush off these hitches and just keep shooting—and keep missing.

It always pays to prioritize a smooth gun mount over a fast one. Make sure you’re bringing the gun up fluidly, moving the barrel toward the target, settling the stock to your shoulder comfortably, and pressing your cheek down firmly.  “Slow is smooth, smooth is fast,” as they say.

Focus on the Target. No, Really Focus

Before each target, Hancock tells himself this simple phrase: “hold it.” This means holding the target in his vision for an instant before shooting.

“If I can get the gun on my shoulder, and I’m matching the speed of the target, I see it clearly and I hold it for just a split second—what feels like a full second when you’re in that nervous mode and you got the adrenaline running—but if I can hold the target and really truly see it clearly, and then pull the trigger and see it break, then I’m literally never going to miss.”

Shots in a hunting scenario are more varied than they are on the skeet field, which makes focusing on the bird clearly even more important. The key term here is “hard focus,” which means not just seeing the duck in the air, but being able to pick out specific detail on the target (the color and shape of the duck’s beak, for example). Physiologically we can only maintain hard focus for a few seconds, but that’s all we need to hit a flying bird. This hyper focus slows down the bird in your mind’s eye, and makes the shot picture clearer.

If, for some reason, you can’t focus clearly on a given shot presentation—the bird is backlit by the sun, it came in too quickly, it’s lost in a dark backdrop—then pass on the shot. Which brings us to the next point…

When elite basketball players are having trouble with their jumper, they pass on long shots and drive to the hoop to get fouled. Knocking down a few free-throws is usually enough to build their confidence, which gets those deep three points to start falling. Wingshooters can do the same on a tough hunt.

When you’re missing, simply pass on long or difficult shots. Take the ducks hovering over the decoys or the roosters flushing at close range. Bring your gun up smoothly, see the bird’s head, and kill him. A couple easy ones will help get your mojo back. Taking hail Mary’s at every bird to fly by is only going to make things worse.

Likewise, avoid taking it to the plug on every bird. If you miss a bird cleanly twice, don’t shoot at it a third time. This third shot is a low percentage one, and you need to focus only on high percentage shots.

All bird hunters should wear hearing protection, but many of us don’t. This is to the detriment to our hearing health, but also, sometimes, to our shooting. I’ve seen shotgun blasts and recoil degrade shooting accuracy on goose hunts where there are many shooters, all huddled closely together, all shooting magnum loads. The percussion and heavy recoil amassed as a group makes for sloppy shooting all around. Geese that should fall dead are missed or hit marginally in a barrage of gunfire.

Ear pro helps. It’s hard to mount your gun smoothly and focus on your target when the guy sitting next to you is rocking the pit blind with 3.5-inch loads like he’s the gunner on a battleship. The best hearing protection takes the pain out of those blasts.

Shooting a smaller gauge or lighter recoiling loads can help as well. We write about recoil and accuracy in rifle shooting all the time, but it’s relevant for wingshooters, too. Just watch that buddy who insists upon shooting 3.5-inch shells. When his gun doesn’t feed or he gets a failed primer, I’ll bet you when the trigger goes click he flinches like the gun is trying to bite him. This does not promote accurate shooting. With all of the killer hunting ammo out there, there’s really no need to shoot loads that hurt. In fact, the trend among many veteran duck hunters is to move toward sub-gauges paired with bismuth or TSS ammo. With good shot selection, this makes for a nicer shooting experience and a higher hit percentage.

The next morning, I was back in my wood duck hole an hour before shooting light, with two boxes of shells and a determination to not use them all. About 30 minutes before shooting light the ducks started flying. I watched them work my spread from all different angles, and I visualized making a good shot on each duck that passed. At the opening bell, I killed the first woodie that was backpedaling over my decoys. As my dog retrieved the duck, I missed a hard crosser that caught me by surprise. Back to the rules, easy shots only, I thought. I proceeded to kill the next two ducks as they cupped over my decoys. That made for a three-wood-duck limit on four shells; time for breakfast. The last tip for working your way out of a shooting slump? Quit while you’re ahead.