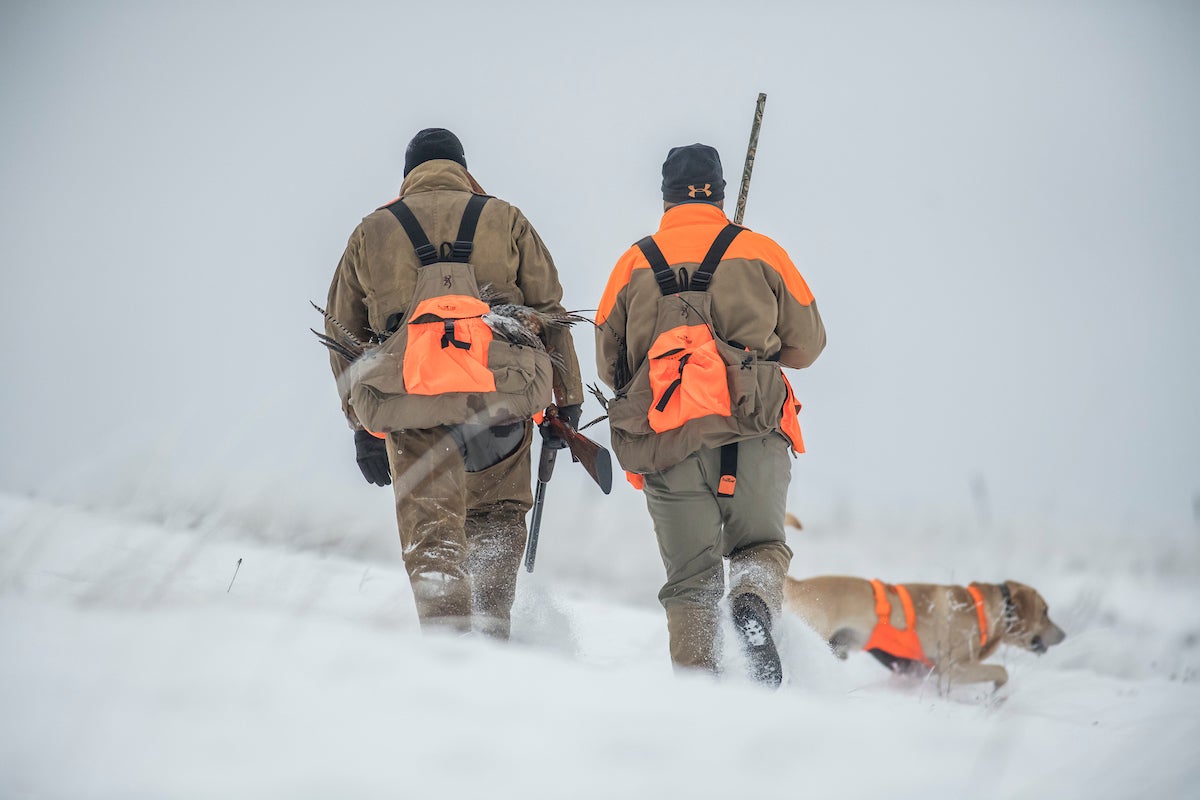 Pheasant hunting can get hot when the conditions are cold. John Hafner
SHARE

By late season, the dumb pheasants are dead. The survivors have learned that if they run instead of flying, they can evade dogs and hunters. These escape artists often squirt out of cover before you even see them. Plus the conditions can be brutal. High winds, frigid temps, and deep snow make late-season pheasant hunting a real challenge for even the most diehard among us.

But, pheasant hunting during the late season also has its perks. The opening day crowds have all gone home by now. Deer hunters are mostly out of the fields. Plus, snowy conditions limit the types of habitat pheasants use, so they can be found in more concentrated areas late in the year. To help you bag more late-season roosters, we interviewed three experts on their best pheasant hunting tips. Their advice will help you put more of pheasants in your bag during the final days of the season.

South Dakota guide Dennis Foster (dakotapheasantguide.com) doesn’t give wild birds any warning. When he pulls into a field with his hunters, he is ready for a quick strike. The dogs are watered and their collars are on. His clients have shells in their pockets and are ready to grab guns from easily accessed soft cases. Any wasted time is time that the birds will use to start running in the other direction.

READ NEXT: How to Kill Pheasants with Your Wild-Ass Retriever

“Late season isn’t the time to go for a pleasant stroll in the pheasant fields,” says Casey Weismantel, Executive Director, Aberdeen South Dakota Convention and Visitors Bureau and HuntFishSD.com. “Cattails are now the prime pheasant cover. Yes, they are tough for people to walk through and for dogs to work through. But that’s where the birds are. Cattails offer overhead cover and allow pheasants to tunnel underneath snow caves. Brushy shelterbelts run a close second to cattails.”

“It always seems like late season pheasants are around water sources,” says Weismantel. “This means slough edges, creekbottoms, river banks … it’s probably the cattails and heavy cover that bring them here.” There’s some question as to whether pheasants have to drink water or not, but the abundant cover is good enough reason to study public land maps for waterways, ditches, lakes, ponds and marshes.

“You can’t overestimate how hard it is to bring down a late-season rooster,” says Weismantel. “For instance, today our group shot 9 birds and not one came back stone-cold dead. Do not go with any shot smaller then No. 4, in a high brass load.” He recommends a 12-gauge gun, even if you love your little 20 earlier in the season, and adds: “Use a modified or full choke … one of each if you are shooting a double barrel.”

Many public-land areas require the use of non-toxic shot. Nowadays, there are a variety of great bismuth loads that are ideal for pheasant hunters.

READ NEXT: The Best Chokes for Pheasant Hunting of 2022

“It’s the first rule of bird hunting,” says Jared Wiklund, Public Relations Specialist for Pheasants Forever. “The dog’s nose knows more than you. This is good advice any time of the season, but especially important when hunting with a few people in late season. It’s easy for a small group to follow the dogs wherever they lead. Dogs can put you on birds in places you never would have walked naturally in a marching line of ten hunters.”

“Prepare yourself to go where no bird hunter has gone since 10 inches of snow fell,” says Wiklund. “Late-season roosters seek out areas of low-disturbance next to a food source. You must put in your time and put on the miles, but the reward is big numbers of birds in small areas of winter cover. Once you find them!”