Minnesota’s Early Teal Experiment: More Opportunity for Duck Hunters or a Threat to Duck Hunting as We Know It?

Wildlife agencies in states like Minnesota are trying to create more opportunity to increase duck hunter numbers. But are the new seasons and more liberal regulations hurting their cause? 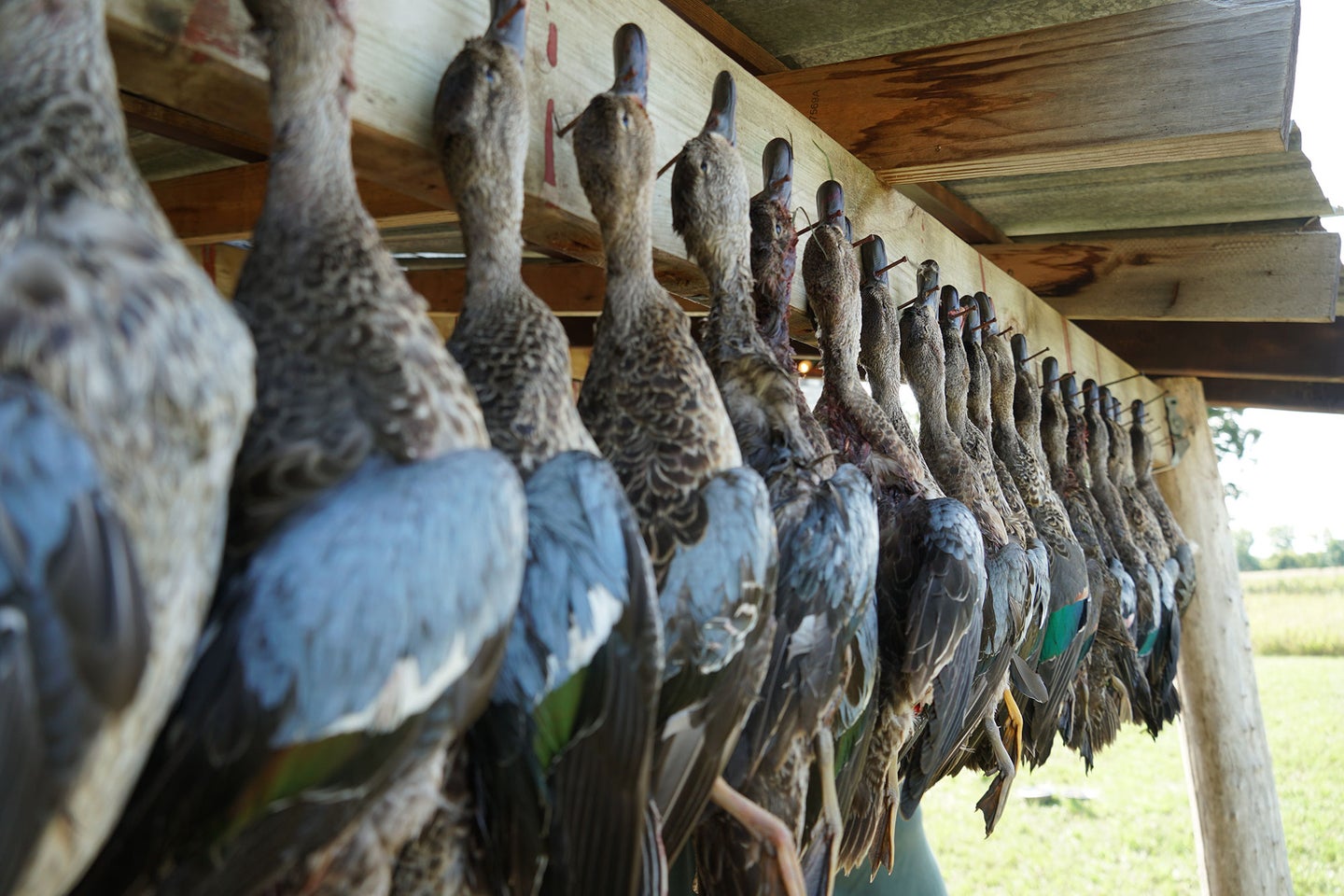 Minnesota opened its first-ever early teal season on Saturday and of course my duck hunting buddies and I were ready for it, shotguns loaded at sunrise, my retriever sitting anxiously at my side. On that first morning we were positioned on a levee next to a public marsh. The guys I was hunting with had killed hundreds of ducks while pass shooting this levee over the years. They called it, simply, “The Opener Spot.”

Before legal shooting light we watched mallards, wood ducks, and teal wing over the levee, flying fast and low. As a group we identified each duck as it passed, testing each other’s bird ID skills. But at opening of legal shooting time (sunrise for this special hunt), nobody popped up to take that first shot. Fifteen minutes ticked by and teal burned past us, but no one made it beyond flicking off their safety. Even though we were all experienced duck hunters, we were a little overcautious about not making the wrong call.

It turns out that we weren’t the only ones who were hesitant to kick off this new duck hunting season. Dennis Anderson, a veteran bird hunter and longtime outdoors writer for the Star Tribune reported that Minnesotans were about evenly split on whether they thought the teal hunt was a good idea, and the Minnesota Department of Natural Resource’s waterfowl committee even recommended against the early teal season. Anderson wrote in his column:

“[It’s an] experiment because no one, not the U.S. Fish and Wildlife Service, which authorized the hunt, nor the Minnesota Department of Natural Resources, which is implementing it, knows how many hunters will go afield seeking these early migrating ducks, nor how many teal the waterfowlers might see, or shoot.

“Experiment also because North America’s most productive duck-breeding region — roughly from northern Iowa, through western Minnesota, the Dakotas and eastern Montana, to the Canadian prairies — is deeply mired in a drought that undoubtedly will reduce to negligible the number of young-of-the-year teal and other ducks that migrate south this fall.”

The goal of this season was to give Minnesota hunters a chance to hunt teal that are reared in the state before they migrate south (teal are early migrators and many head south before the regular opening day). As Anderson reports, Minnesota used to lead the nation in waterfowl hunting participation, but it has never had fewer active duck hunters than it had last year—only  51,000 according to the U.S. Fish and Wildlife service. Maybe this new season will get some older hunters reinterested and some new hunters buying licenses and duck stamps?

The argument against the season is that hunting early teal could make the regular season opener worse for everyone, which will only drive more duck hunters away from the sport. Minnesota is also allowing the use of spinning-wing decoys through the entire season and open-water early goose hunting across the state—both new liberalized regulations for this year. Some veteran duck hunters will argue that by loosening regulations, the state is going to be putting more pressure on birds, which decreases the experience, and inevitably decreases participation. So, who is right?

Research and data will tell the full story in the years to come. But sometimes duck hunters’ experiences in the field matter just as much as any data set. Through just two days of hunting this experimental teal season, the benefits and negative consequences were pretty obvious—at least anecdotally. Here are some things for all of us duck hunters to consider.

Accidental Take Will Be Minimal (At Least for Experienced, Responsible Hunters)

On the opening morning of teal season, my group finally did work up the nerve to make that first shot on a crossing teal. Once the ice was broken, we all relaxed and started having a good time. Luckily for us, we had plenty of opportunities. The teal just kept coming—and kept dropping.

The rapid cadence of their wingbeats, the small size and compact shape, and the light blue patches on their wings made teal easy enough to identify. When we saw non-teal species approaching the levee, we called them out. We got confirmation from the hunter next to us before almost every shot. If we weren’t 100 percent sure about the species, we didn’t shoot. By about 9:30 each hunter in our group of four had killed his limit of six teal (except for one hunter who decided to stop a bird short of his limit; it was breakfast time, after all). That made 23 bagged teal, and not a single mis-identified non-teal species. I’m most proud to report that we didn’t lose a single duck—not one cripple got away.

I write this not to brag about my dog (OK, maybe a little), but to illustrate that you can have a hell of a good teal shoot without accidentally taking other duck species or losing birds. States and management agencies can, and must, trust their duck hunters to ID birds. Responsible hunters will be responsible, regardless of the season, and slob hunters will be slobs, regardless of regulations.

This same procedure of under-cover monitoring is going on during the Minnesota early teal season. Hopefully our numbers will be even better.

I’ll add one caveat on the teal identification point: I think it will be hard for new duck hunters to figure out on their own. Accurately identifying a duck on the wing takes experience. You need to see a lot of birds and have your guesses checked.

New duck hunters looking to get in on the early teal hunt will likely need mentors to tag along with, or they’re going to be anxious about misidentifying a duck. One of the hunters in my group had a buddy who decided to sit out the early teal season because he was worried about making the wrong call and getting a ticket. He’d just wait for the regular duck opener.

So, yes, the early teal season is a great, additional opportunity for Minnesota duck hunters, but with the requirement of properly identifying duck species on the wing (along with the risk getting a ticket) it might not be the best opportunity for brand-new duck hunters to strike out on their own.

The Impact of Hunting Pressure is Real

There weren’t any other duck hunting parties at the “Opener Spot.” Usually there are a few groups hunting it during the regular duck season opener. We did hear some folks banging away in the distance, but far from the cacophony of gunfire you hear on opening day. But hunting pressure was still a factor.

After our morning hunt I bumped into a couple goose hunters at the gas station and asked how they did. “Horrible,” the kid responded. “Damn teal hunters shot on the roost at sunrise and blew up all our birds.”

That evening I tagged along with a couple other buddies from our crew who were going to take a crack at the “Opener Spot.” I ran my dog as they tried to pick up a few more teal for the day. I noticed there were substantially fewer ducks working the marsh compared to the evening before—by more than half. On the morning of day two, we hunted a different public pond and noticed that mallards were already flying higher and some were even flaring as they approached our decoys. There was much less shooting on the second morning.

The Minnesota youth duck season is next weekend. The regular duck opener is on Sept. 25. For popular public hunting marshes, that means two weekends of pounding and then one weekend of rest before the duck season actually opens. For local ducks, I suspect this will be enough to push them into backwaters and private land spots.

These days, the most experienced waterfowl hunters in the country are talking more and more about mitigating hunting pressure. This is not to say that there won’t be ducks around during opening day of regular duck season, there just might not be as many in the most obvious places. Luckily, there is a lot of public duck hunting opportunity in Minnesota, so it’s not like the birds will become untouchable. It might just take a little extra work to find them.

The Good Old Days Are Gone, and I’m Good With That

Ducks and geese are the most dynamic species that we hunt. Their behavior is not only impacted by local habitat and hunting methods, but it’s also impacted by changes on a continental scale. Massive factors like climate change, drought, farming practices, and wetlands degradation will all change our duck hunting experience more than, say, a new early teal season.

In his column, Anderson wrote: “What of the 75,000 Minnesotans who no longer hunt ducks? Some have passed on. Others have grayed out. But many others have hung up their guns, or hunt in other states, for what they say is a very simple reason. Minnesota has no ducks. Or too few to bother with. Moreover, they say, and with validity, that rather than continually liberalizing duck regulations in attempts to keep hunters in the sport, they should do the hard work necessary in the Legislature and particularly in the governor’s office to clean up the state’s shallow lakes and re-establish its wetlands, not only to help ducks and other aquatic wildlife, but, more importantly still, to benefit people.”

I couldn’t agree more about cleaning up shallow lakes and improving wetlands. The key to good duck hunting, without question, is good waterfowl habitat (and a lot of it). I will not, however, sit out duck seasons while waiting for a legislature to do … well, anything. I’d argue that Minnesota still has a whole hell of a lot of ducks and geese, and some doves, too. Take my weekend hunting anecdotes as proof. In my opinion, there’s great waterfowl hunting to be had in this state and almost every other state along the Mississippi and Central Flyways.

I know this because I’m out there, with my buddies and my dog, getting after’em. It takes work, scouting, creativity, and sometimes some money. We usually don’t shoot limits, but that’s not the point. The point is simply to go. There are new places to explore, new seasons to hunt, and new tactics to try. If there’s a duck hunting experiment to be had, I’m going to be in on it. I hope that you will be too.