The Best Way to Pluck a Wild Duck 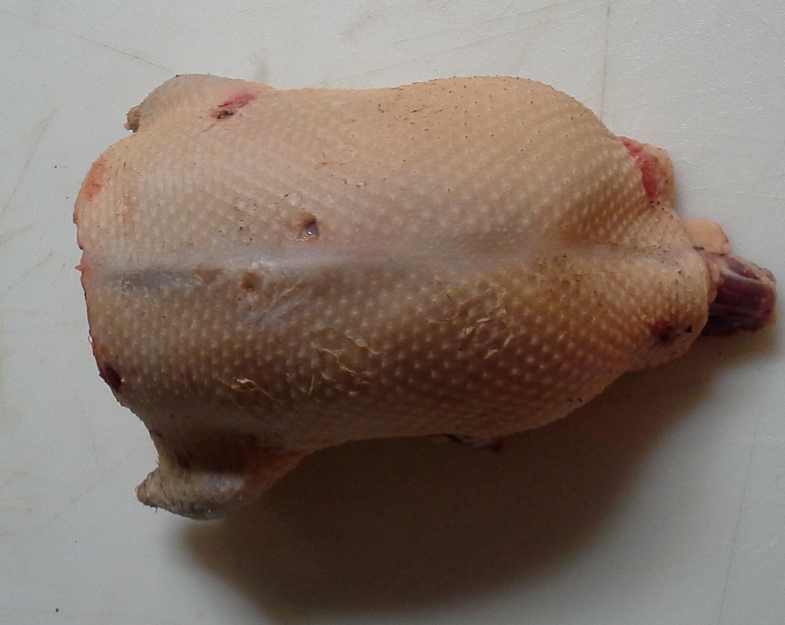 I shot my first duck when I was 8 or 9 years old. I was sitting in a duck boat with my grandfather and an old single shot .410 shotgun. It was early morning and we watched a drake mallard land in the decoys and swim around for what seemed like an eternity. When Grandpa told me it was time to shoot I stood up, braced myself, and fired. That was it—I had shot my first duck and I couldn’t have been any happier. Then we got home and I was told that I needed to clean that duck. That is where Grandpa turned me over to my grandmother, and she walked me through the process.

Grandma got me started plucking out all the feathers and showed me how to pull against the grain to make them come out a little easier. While I was plucking the duck, she was getting a large pot full of water to boil. Then she added a couple of large chunks of wax to the water and when I’d gotten enough of the feathers off, she showed me how to dip the duck and coat it in wax. We let it cool and harden, then peeled all the wax off and voila: a perfectly cleaned duck. It looked like something you would buy at the grocery store. I will never forget that first duck: Grandma cooked it special just for me and made Duck à l’orange. It was a wonderful duck, I wish I could remember how wonderful it actually tasted, but all I can remember is eating every last bite of that duck.

Unfortunately, I did a really good job of cleaning that duck and from that point on the job of cleaning the ducks was left to me. My dad would always say, “You do such a great job you should really do all of them.” I didn’t really mind cleaning the ducks and, in the end it, was a valuable skill to learn. Over the years I’ve tried several different methods—I’m always looking for and easier or quicker way. And I’ve learned there’s no more efficient method for cleaning ducks than wax. Even younger ducks with all those pin feathers—you can get most of them out with wax.

The process is pretty easy, although it can be time consuming. Here’s how: 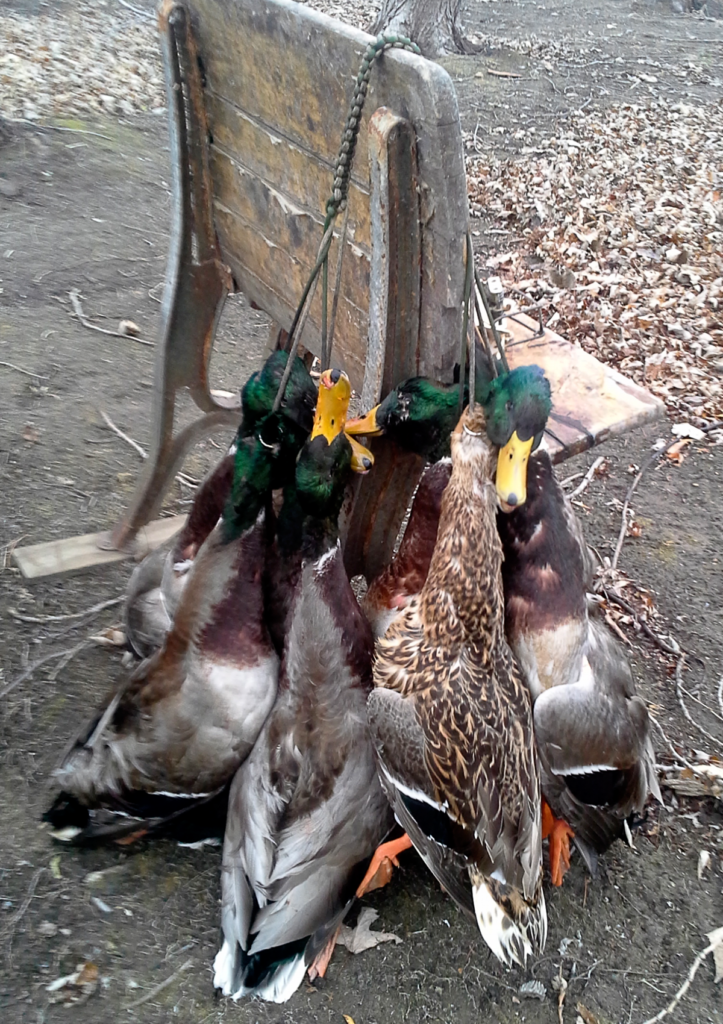 Set a large pot of water on the stove and bring to a boil, then add about a ½ pound of wax for 6 ducks. While everything’s waiting to boil, start plucking the ducks. Holding them by the feet and plucking away from you is the best method.

Once you get the majority of the feathers off the body, wings, and neck, you can clip the wings and neck off. Leave the feet so you have something to hold on to.

Dip the duck into the wax. You want to be pretty quick with you dip—you don’t want to cook the duck, just clean him. Place a five gallon pail filled with ice water nearby to help keep you bird cold.

Dip in the wax quickly, then the ice water to harden the wax. I like to dip the duck 6-8 times to produce a nice hard layer of wax. Once the wax is set and hard you can start peeling it off. This will remove all of those little feathers and hairs that you can’t remove just by plucking. Once you’re done with the wax, you can make an incision at the bottom of the breasts to get to the internal organs and gut the bird. You can throw that stuff away, or save it up and use it. I like to eat all the livers, hearts, and gizzards. 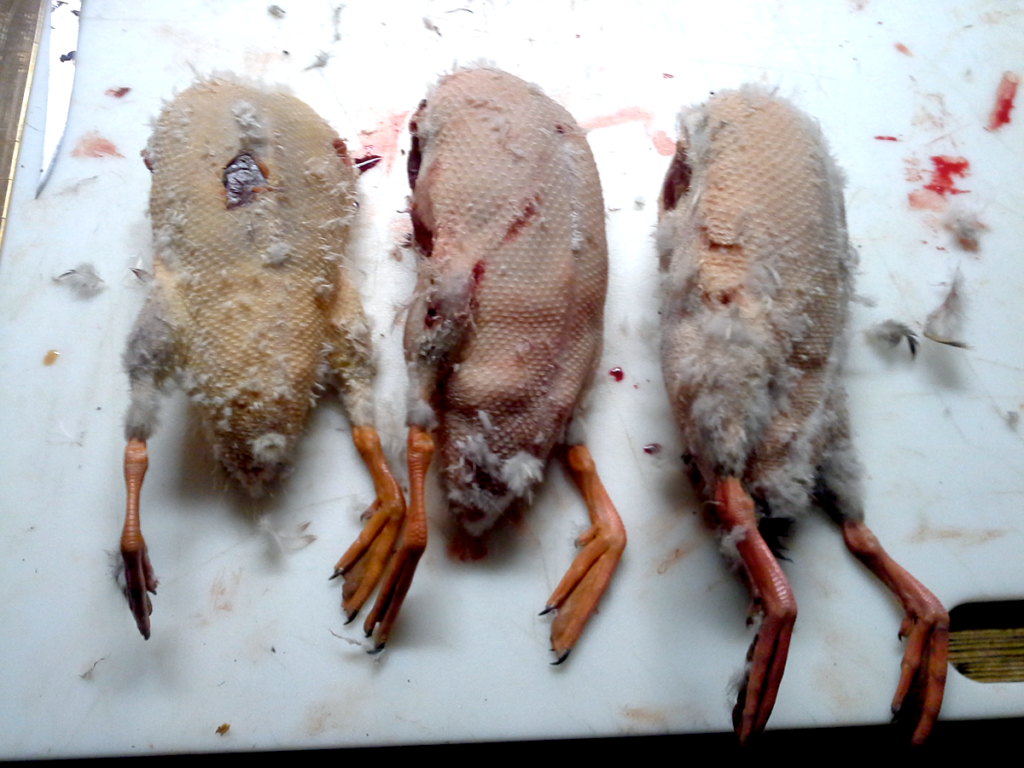 So which ducks should you pluck whole and which ones should you leave well enough alone? I like to pluck as many ducks whole as I can. There are some birds that I will just breast out—it mostly depends on how they were shot. Any duck that only has a few pellets in it is going to get the full plucking treatment. Sometimes there are ducks that catch the whole shot grouping and trying to pluck them is nearly impossible without ripping the skin off. Those are the birds I will breast out.

One alternative method that I have found works really well on late season ducks is duct tape. Duck that have their full plumage and no annoying little pin feathers can be plucked whole. I then take duct tape and wrap it around my hand with the sticky side out. All you have to do is rub the duck with the tape and it will remove most of the remaining feathers. I then run a torch over it to burn off any remaining hair and feather that didn’t come off. It’s not as effective as as wax, but it does a pretty good job and will work if you don’t have wax available. 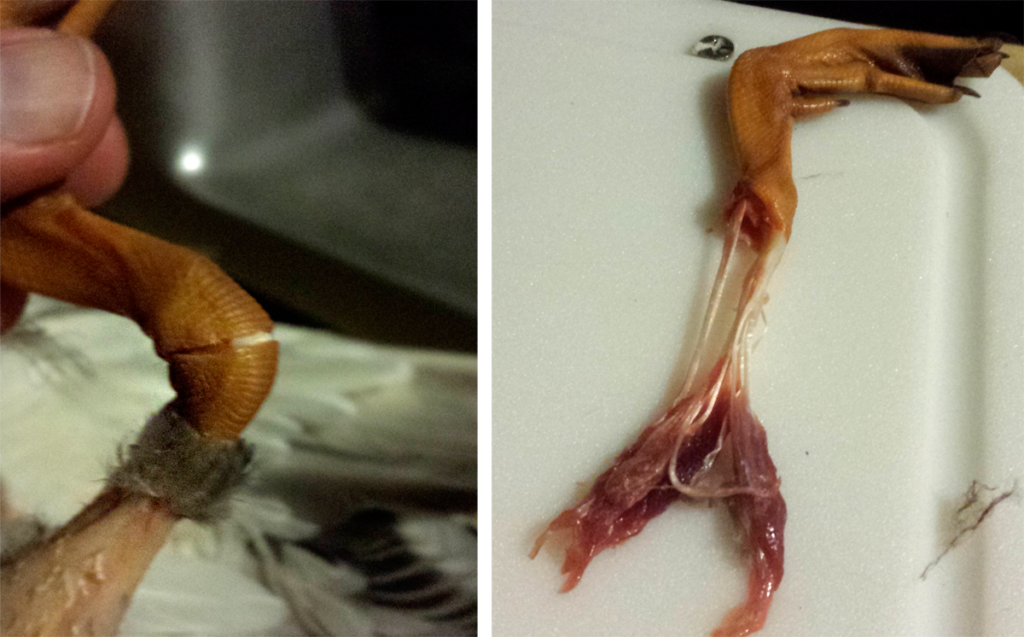 The last thing left to do is remove the feet. This can be as simple as taking some shears and cutting them off. My preferred method. At the knuckle at the end of the drumstick you make a shallow cut all the way around the leg. Then break the joint and with all of your strength give it a pull. This will pull some of the tendons out of the legs and make them a little less tough to eat.

Stay tuned for a recipe on what to do with your whole ducks.