How to Cook Raccoon: A Recipe for Brined Bandit and Sweet Potato Hash

It is understandable that most people recoil, contort their faces, and offer loathsome and resistive expletives at the mere suggestion...

It is understandable that most people recoil, contort their faces, and offer loathsome and resistive expletives at the mere suggestion of wild dishes where the hero ingredient is small rural game like muskrat, porcupine, opossum, squirrel, or raccoon. But when you think about it, these are common historical proteins that were often on the menu before the development of modern refrigeration and the jaw-dropping abundance of commercially grown foods—particularly if one lived in remote and rural areas away from the conveniences that a city afforded.

As recently as my 1975 edition of The Joy of Cooking, (originally published in 1931 during the Great Depression by German immigrant, Irma von Starkloff Rombauer), a section was still dedicated to the preparation of wild game that included not only critters mentioned above, but beaver tail, wild boar head, woodchuck, and armadillo, too. 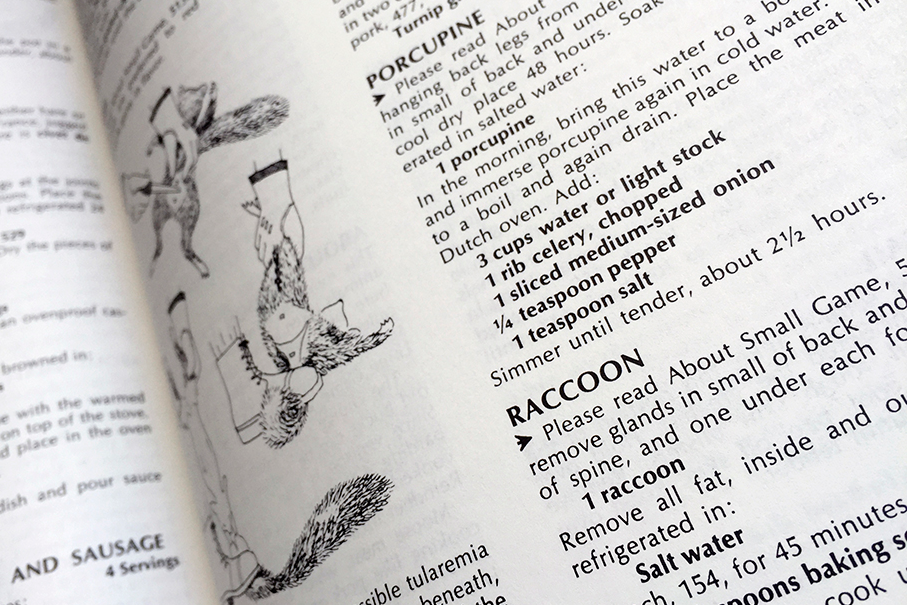 Though we often think of them as urban dwelling, garbage pillaging, disease-spreading road kill, my experience has been with those dwelling in woodland and rural habitats where they feed on a natural diet, and the risk of disease is negligible. So when my brother called last fall to let me know he had trapped a 30-pound Upper Mississippi Valley boar raccoon that had been terrorizing his Sil-go-Link chickens near our childhood family farm, the adventurous epicurean in me seized the opportunity to experiment with a common wild protein from our American heritage, and gross-out the family in the process. 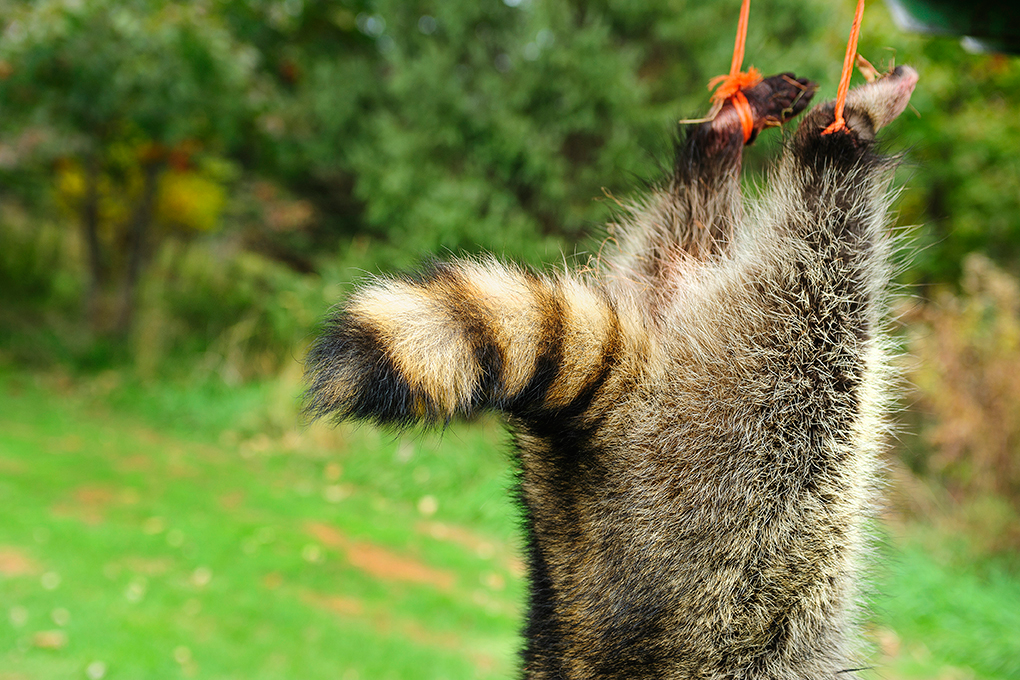 Why? Well, maybe the same reason people say they climb a mountain “…because it’s there.” It represents a personal challenge. The result? Moist and tender, fall-off-the-bone, “turkey thigh-like” tasting meat. While I did not pull the meat off the bones and toss with a barbeque sauce, or use in a strata or hotdish, those are other options for it.

Would I do it again? Probably not, given my 21st-century lifestyle. Cooking raccoon was a very time-intensive process that involved skinning, chilling to firm up the fat, then re-cleaning to remove as much fat as possible, then making the brine, brining for 24 hours, searing, braising…well, you get the idea.

Lastly, many associate raccoons with rabies. And yes, they can carry that disease. However, rabid raccoons will display unusual and aggressive behavior, will not feed, and tend to naturally die off in cold weather, when most raccoons are trapped or taken. If you intend to cook one, make sure you know its origin. If cooking or eating one makes you uncomfortable for safety reasons—not just because it’s a raccoon)—by all means, don’t eat it. 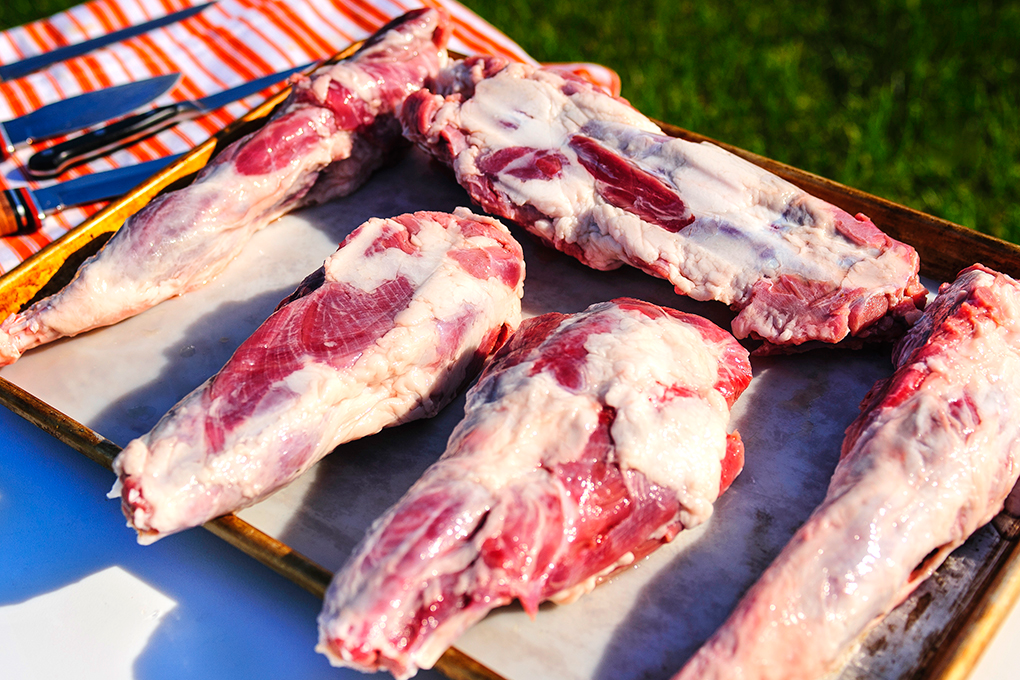 Quartered raccoon after skinning and chilling. This boar had begun bulking up for winter, so there’s more fat to remove before brining. 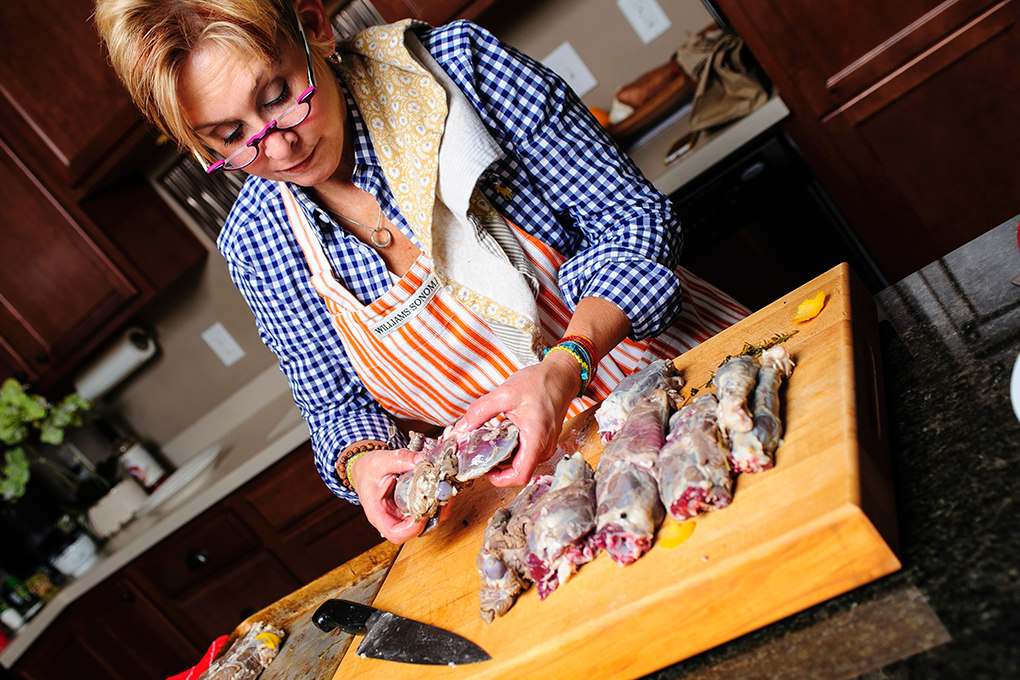 Remove the quarters from the brine and break down into workable parts. I have left the meat bone-in. 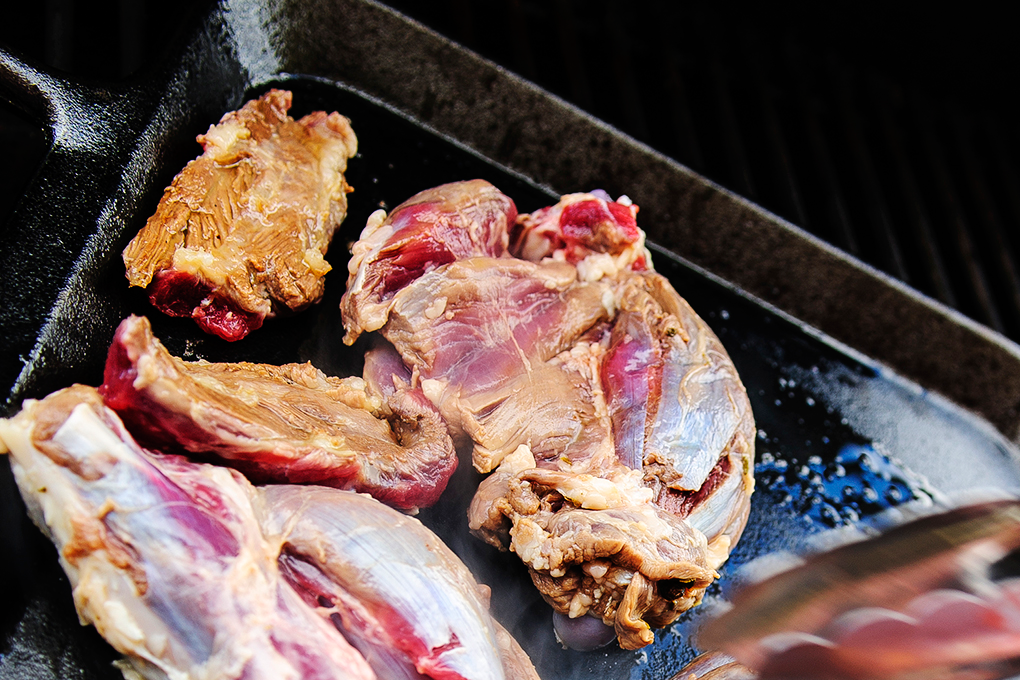 Quickly brown all sides in some olive oil. You do not want to cook through. That will be accomplished in the braising. I like browning on a cast iron skillet heated to smoking on a hot grill.

After searing the raccoon will have nice brown bits that will add richness to the stew. 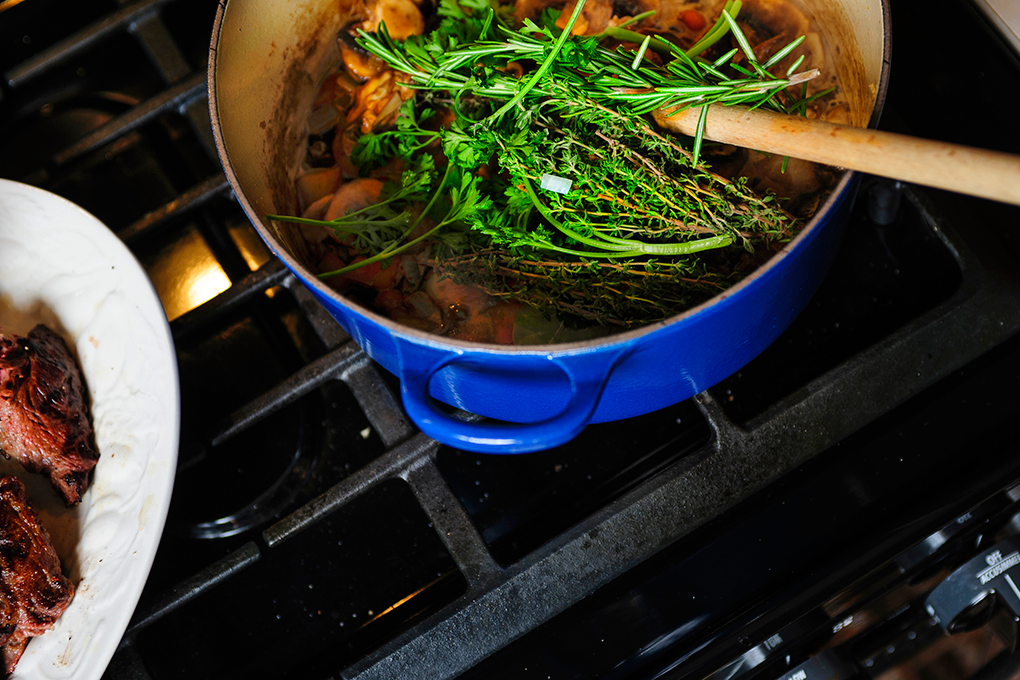 Sauté the vegetables in a Dutch oven, pour in the imperial stout, and toss in the fresh herbs. 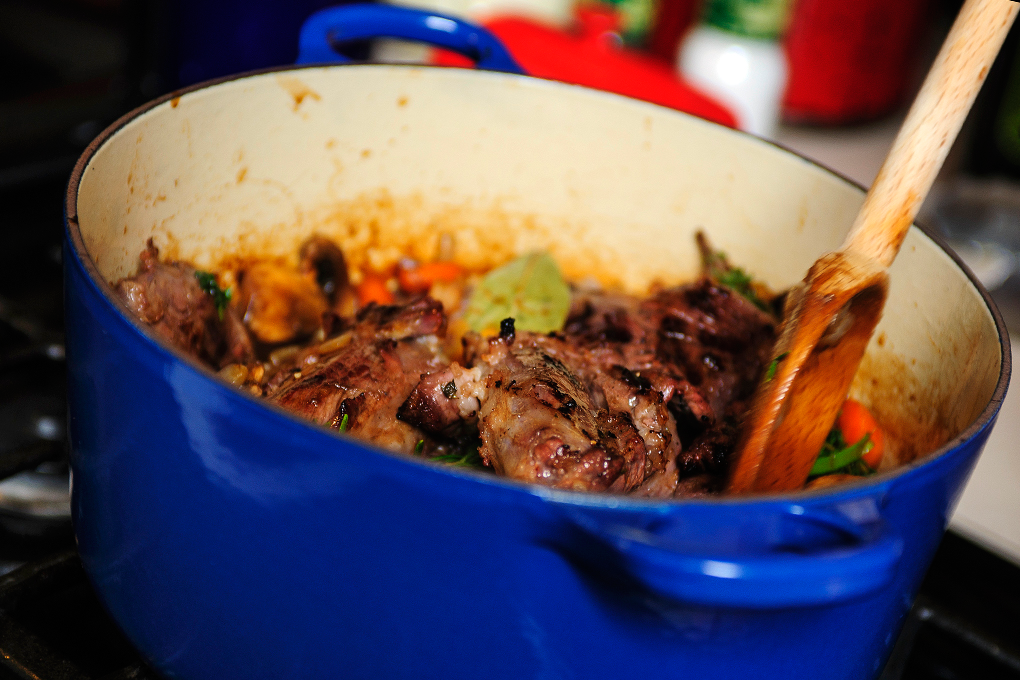 Add in the browned raccoon and vegetable or chicken stock. 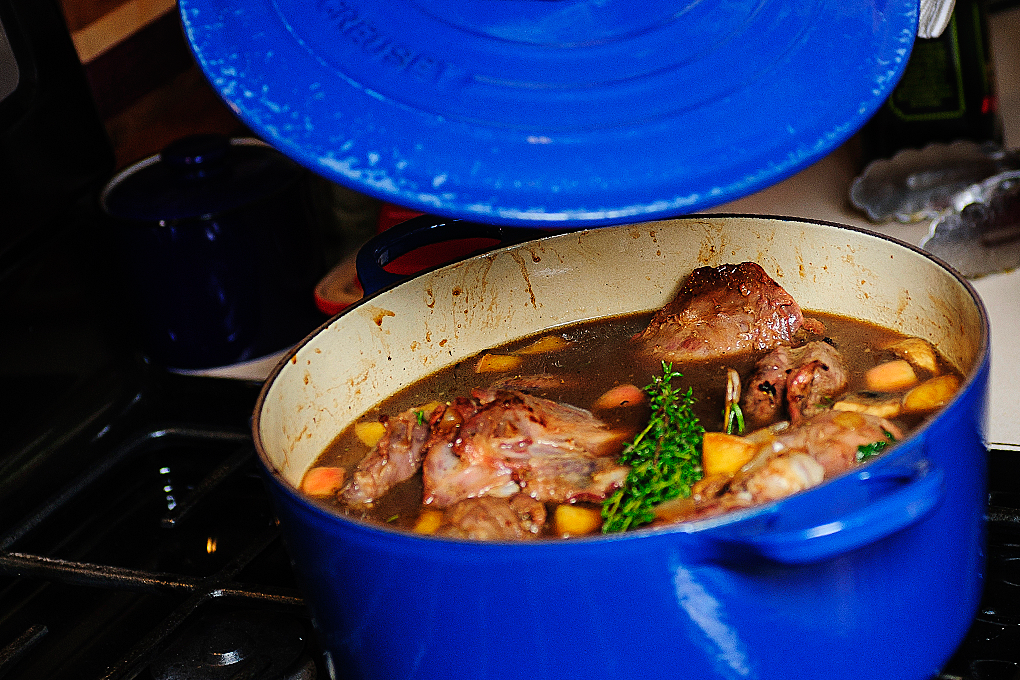 Cover and simmer until the raccoon is falling off the bone. 1½ -2 hours

While the raccoon is braising to it’s tender and moist perfection, go ahead and prepare the ingredients for the sweet potato hash. 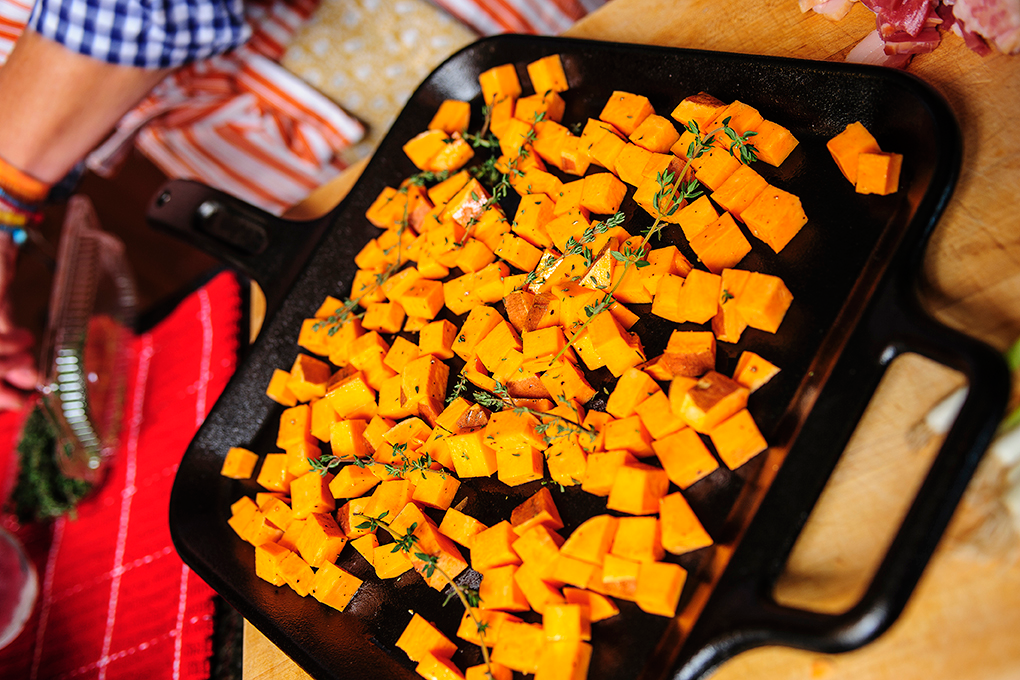 When you are about 30 minutes from serving the braised raccoon, toss the diced sweet potatoes with olive oil, salt, pepper, some sprigs of thyme and pop in a 400-degree oven. Roast until tender, but not mushy. Remove and set aside. 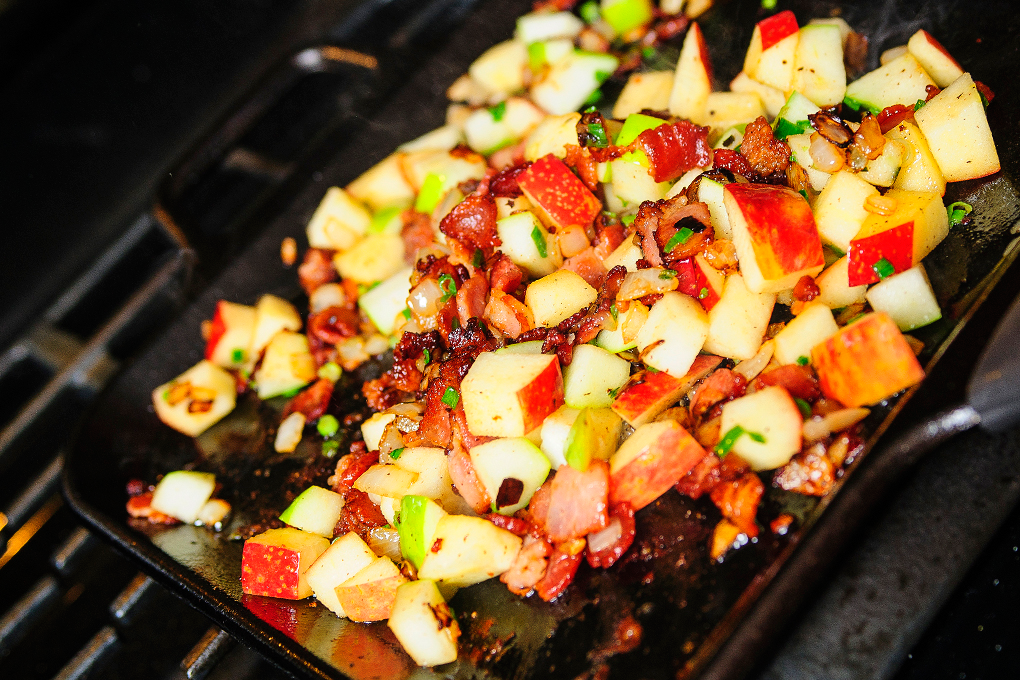 Sauté the bacon lardoons rendering some of the fat before adding diced onion and apple. Cook until tender. Toss on the sliced green onion, and hit with a drizzle of whiskey if you are so inclined. Add in the reserved roasted sweet potatoes and sprinkle with pepitos.

Plate up and watch your dinner guests suck the meat from the bone!