Meat and Beans: How to Make Wild Game Cassoulet

In the past year or so I have really enjoyed researching the history and origins of some of the dishes... 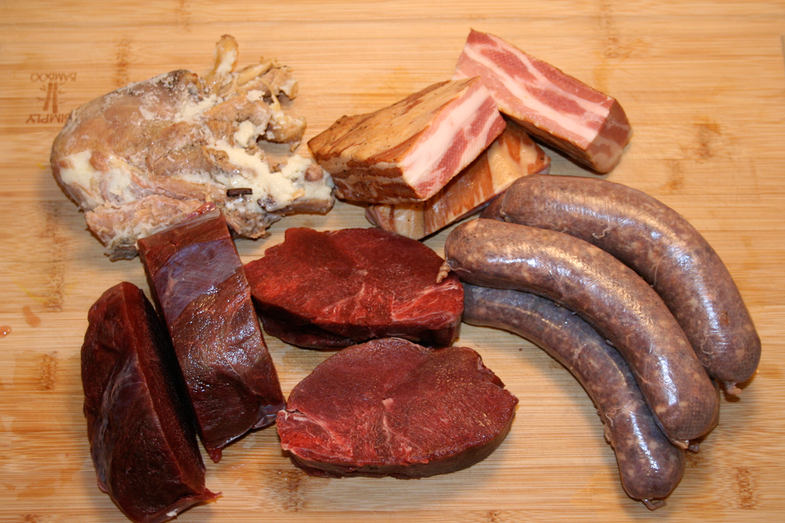 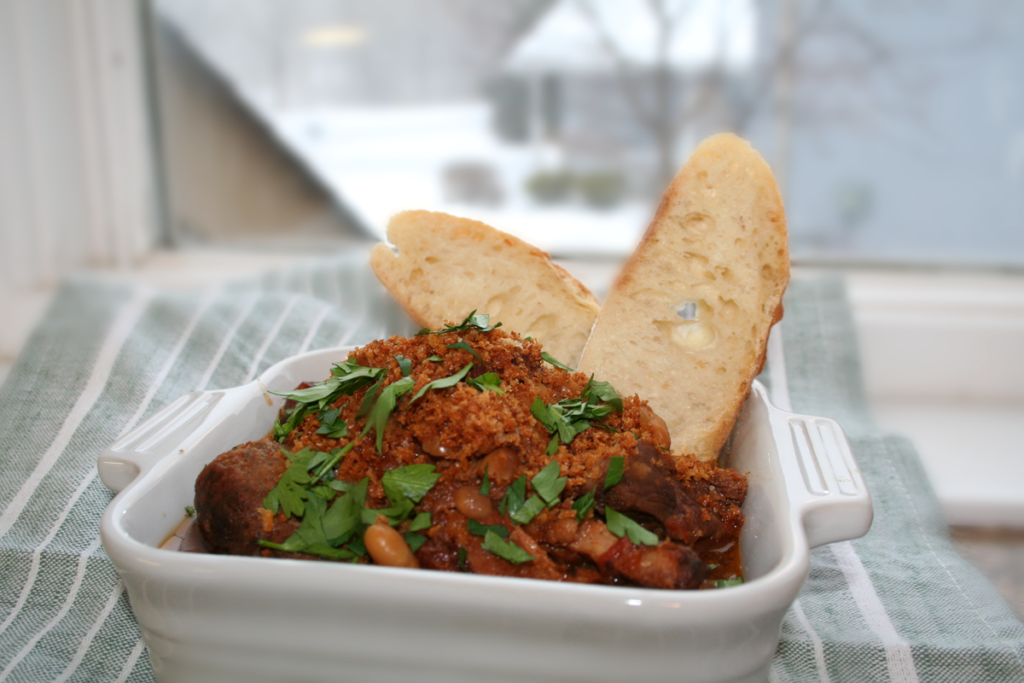 In the past year or so I have really enjoyed researching the history and origins of some of the dishes I prepare. One of the things I’ve found about many of these domestic-meat dishes are that they were originally prepared with wild game. And one of those dishes is a French classic known as cassoulet. Cassoulet, in its most basic form, is a dish of beans and meats slow-cooked for hours, and sometimes days.

Like many French dishes several different regions of France have claimed to be the original inventor of cassoulet. One of the origin stories I read was that Cassoulet was the invention of the towns’ people of Castelnaudary. During The Hundred Years war between France and England in the 14th century the English were about to sack the town. The village came together and made a meal of beans and pork and sausages that were so delicious and nourishing that the soldiers were able to push the English back and save the city.

Some historians claim the dish isn’t French at all and that its origin is an Arab fava bean and mutton stew that dates back to the 1200s. Wherever it came from, it’s one of the best meals you can have on a cold winter’s day. The varieties of cassoulet are endless, and the French cassoulet is the equivalent of chili in the Southwest. Every region makes it differently and all of them believe they are the only ones who make it the right way.

Beans are the only consistent ingredient in all of them. Depending on where you’re from it can be made with any variety of sausages, lamb, mutton, pork, duck and goose. Many versions call for duck or goose confit while some call for foie gras (the fattened liver of ducks or geese). Bacon, salt pork, uncured pork belly, and pork roasts are often used. The cuts of meat are usually the cheaper cuts that stand up to long cooking times. I read that a good cassoulet should cook for at least 10 hours and some are cooked for several days.

When I looked for recipes for a cassoulet, I found recipes in almost all of my French cookbooks. The recipe in Julia Childs’ Mastering the Art of French Cooking is six pages long. Six. I wasn’t looking for anything that complicated, so I searched the internet and found a recipe from Chef Thomas Keller for a slow-cooker cassoulet. That seemed to be right up my alley so I used it as my guide.

I wanted to make a cassoulet using some of the wild game I had in the freezer. I settled on my wild turkey confit, some duck, apple and onion sausages, and the wild turkey stock I made last fall. I also threw in some of my homemade bacon. After 12 hours in the slow cooker what I ended up with is one of the best things I have ever tasted. All of the meats are melt-in-your-mouth tender, and beans and sauce are out of this world. Served with some crusty bread to sop up any leftover sauce, it’s exactly what I hoped it would be. 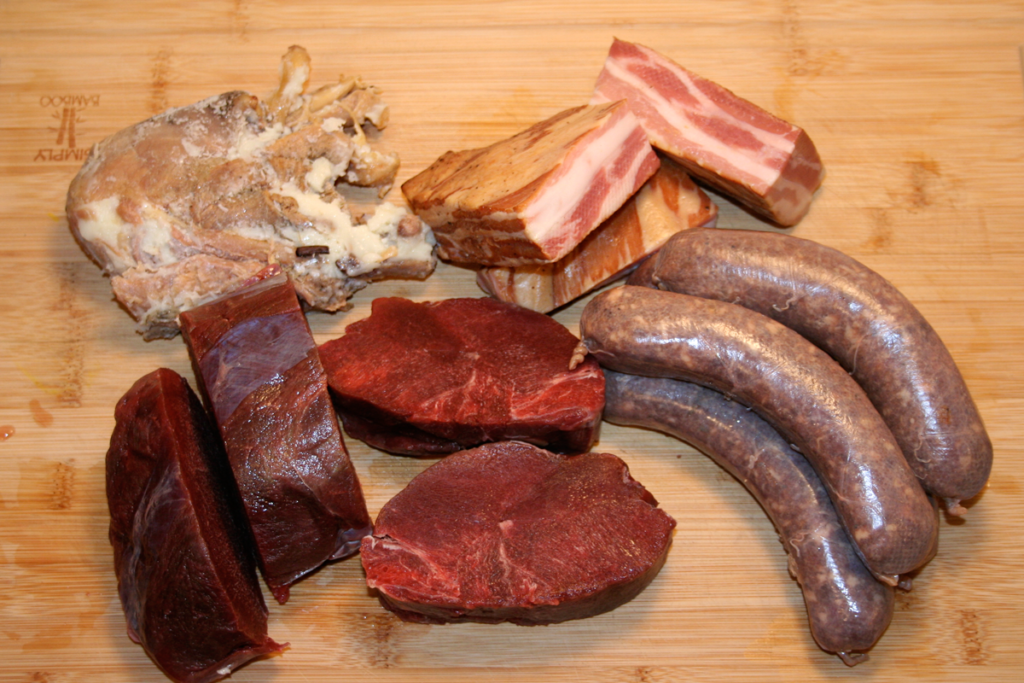 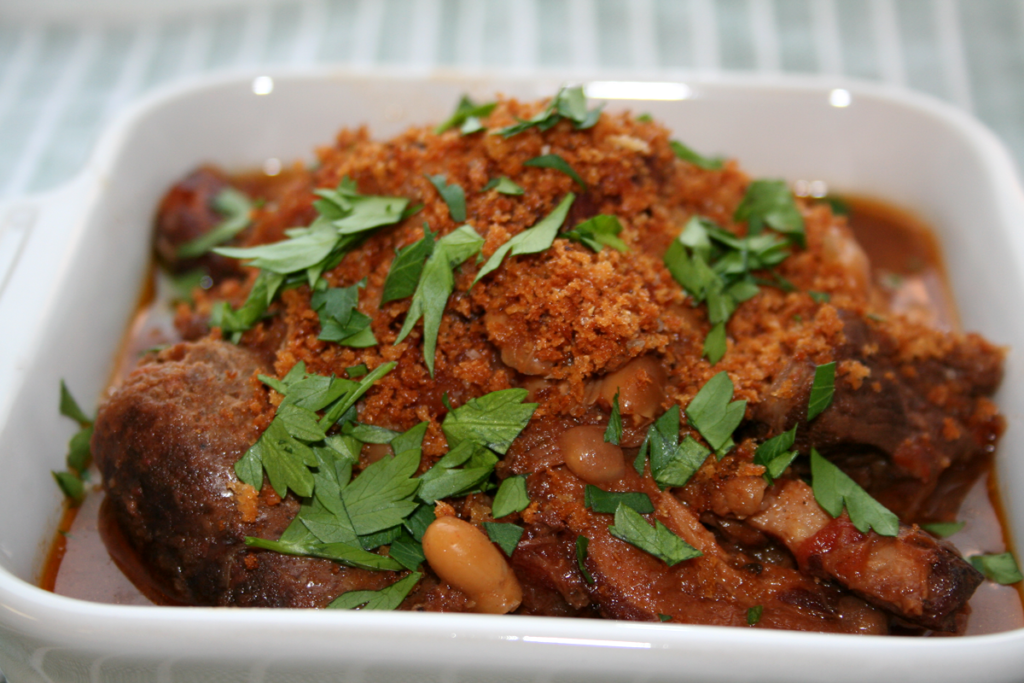 Set up your large slow cooker. Then start rendering you bacon in a large pan, on medium low heat. When the bacon is browned, remove in from the pan and add it to the slow cooker. Fry the sausages in the bacon fat until each sausage has a nice brown color to it, then set aside to cool.

Turn the heat up to medium high and cook the pieces of venison shoulder until they develop a brown crust. Add the venison to the slow cooker, then cut the sausages in half and add them to the slow cooker as well. If you have plenty of bacon fat in the pan, add the onions and saute for 4-5 minutes until soft. If there isn’t enough fat add some olive oil. When the onions are done, add the cider and cook until the cider has reduced by half. Stir in the tomato paste until well combined then add the tomatoes and stock. Bring to a boil, then pour the mixture into the slow cooker.

Pour in the beans and add the garlic, thyme, and bay leaves. Give the mixture a stir and then place the confit legs in the cassoulet and cook on low for 10-12 hours. Before you serve the cassoulet, add two tablespoons of olive oil to a dry pan and then one cup of panko bread crumbs. Toast the bread crumbs until golden brown then transfer them to a bowl and season with salt and pepper. Sprinkle the bread crumbs on each serving of cassoulet with a little chopped parsley.