You've heard all the hype, but are single bevel broadheads really right for your bowhunting setup? Here's what you need to know 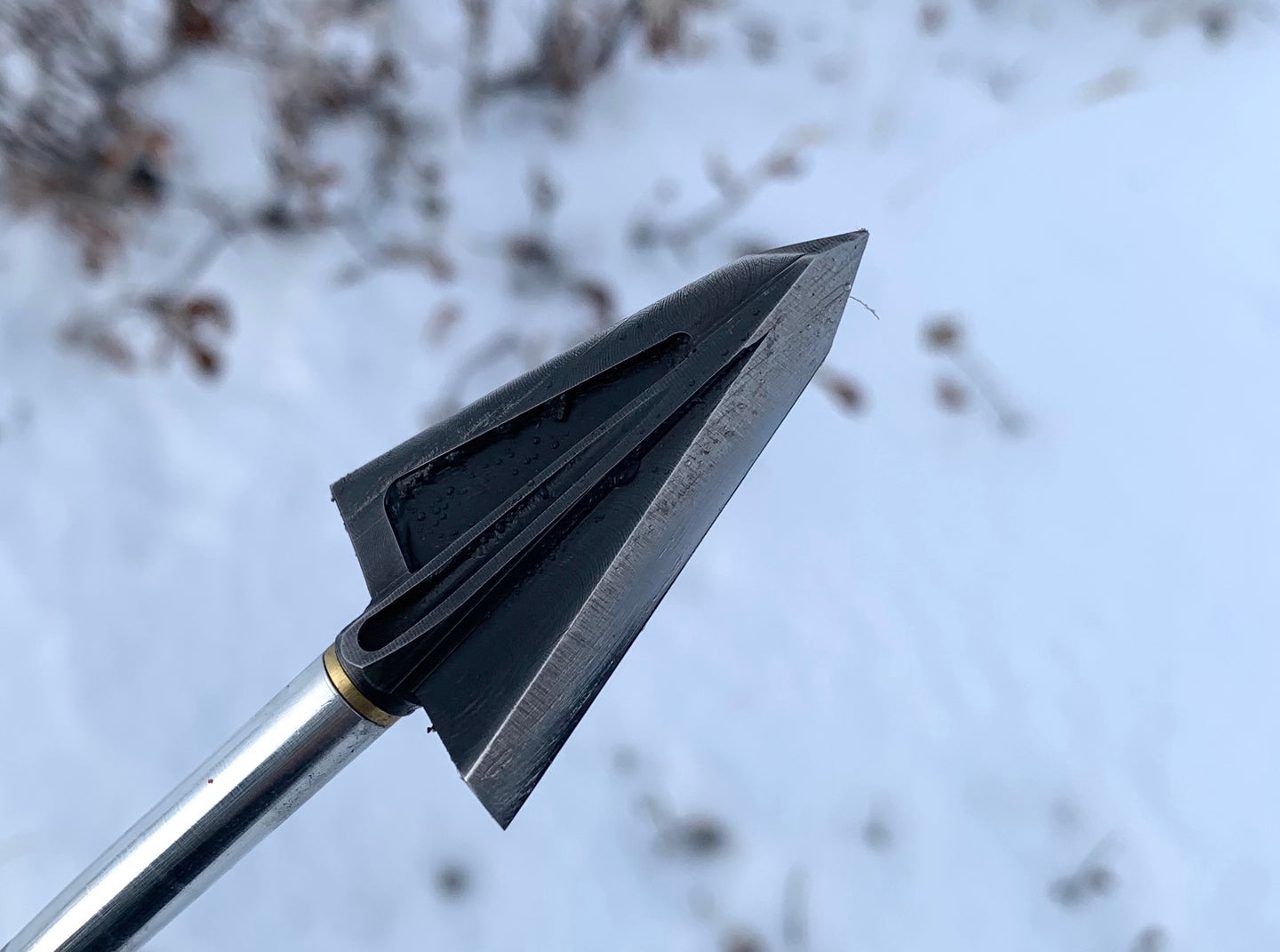 If you’re a bowhunter, it’s almost a certainty that you’ve heard of single bevel broadheads. What were once only whispers and hushed conversations in the dusty corners of archery shops—with only the vintage Ben Pearson and Bear recurves to hear them—have become mainstream conversations about this style of broadhead. Some laud it as the optimal tool for a bowhunter. Others bring up its real and perceived drawbacks. But what really, is the deal with single bevel broadheads? More importantly, should you be shooting them? I’ve been hunting with and writing about single bevel broadheads before it was trendy. Here’s what I’ve learned about them through the years.

Crap, I thought to myself as the grizzly’s head snapped up. It was the end of a frustrating and long season. Between mechanical issues with my outboard boat motor and bears that just wouldn’t cooperate, I was at the end of my rope. I was sure I’d just screwed up my only opportunity at a mature grizzly for the season when—in my haste to draw—my arrow fell off the Bear weather rest on my recurve. The carbon arrow hitting the shelf of my aluminum riser made a tink that might as well have been a gunshot.

The bear had just sat on its haunches broadside, but quickly got back to his feet, looking below me for the source of the noise. Then he walked toward me. I couldn’t let down, so I continued to draw my recurve. At full draw, I used two fingers from my bow hand to place the arrow back on the rest. The bear stopped at 8 yards. He’s gonna spook, I thought. I’d seen this demeanor before. He would slowly turn, then once his back was to me, he’d be sprint into the woods.

Still at full draw, I bent at the hip, pointing down at the bear. He caught movement and looked up as he began his slow turn to run. At 45-degrees quartering-to, I shot—aiming directly for his front shoulder. The arrow penetrated deep, through the bear’s front shoulder, heart, and out the brisket. This was the fourth grizzly bear I’d killed with single bevel broadheads. Consider it a soft-served, cherry-topped example of their benefits.

What is a Single Bevel Broadhead?

A single bevel broadhead is typically a solid, one-piece, broadhead with two cutting blades. The term “single bevel” refers to the type of cutting edge that’s on each side of the broadhead. Traditionally, most 2-blade-style broadheads are what we’d call double bevel. That means that the edge is ground on both sides of the blade—like a knife. The two sides are ground evenly to a point which gives you your cutting edge.

Single bevel broadheads are ground in a specific way, so that both cutting blades match. When held tip pointing up, looking at the flat side of the broadhead, you’ll see one side with a grind and the other side flat. Single bevels are made typically in “right bevel” and “left bevel.” When holding a broadhead pointing up in front of you, a right bevel head will have the grind visible on the right side of the broadhead, and the left blade will show the flat side. Spin it 180-degrees, and you’ll see the grind on the right side again. It’s the opposite for left bevel.

Many single bevel broadheads appear to be long and skinny, however some are short with steeper blade angles. Some have concave curved blade angles, and some have obtuse angles on the cutting edge. Remember, what makes them a single bevel is the style of the edge grind.

The main selling point of single bevel broadheads is penetration—especially when encountering bone. The most referenced research when it comes to single bevel broadheads are the papers of Dr. Ed Ashby, who also experimented with arrow weights and balance (i.e., F.O.C.) to try and develop the ultimate penetrating arrow—even for longbows and recurves.

Much of an arrow’s penetration has to do with overall arrow weight, momentum, and the profile of the broadhead itself. However, the common reference to single bevel broadheads’ ability to penetrate and even split bone has to do with the way the edge cuts compared to a standard double-bevel cutting edge.

With a grind on only one side of each blade, a single bevel’s path of least resistance is to spin as it penetrates. The flesh or material it is penetrating through continues to drive that rotation—pressing on the bevel as the broadhead moves forward. It creates a unique S-shaped cut, and the torsional forces can sometimes split bone. I watched my dad shoot a bull muskox through both shoulders with a 50-pound recurve and 550-grain arrow. The single bevel broadheads split the near scapula from top to bottom and penetrated through the far one.

The biggest key to having any broadhead work well is to have it be as sharp as possible. All the advantages of a broadhead are for naught if you can’t get them shaving sharp. It might seem like an impossible task to sharpen single bevel broadheads, but I’ve found it to be very simple. In-fact, I find it much easier to sharpen single bevel points than double bevel—and you can get them sharper than even commercial replaceable blades.

Some 3-blade designs are easy to get adequately sharp with just a diamond stick or ceramic rod, and there are lots of great tools for sharpening double bevel broadheads. Still, you can never get them as sharp as a single bevel. Why? Because of the angles.

Most single bevel broadhead edges are ground at 25 degrees. Because the grind is only on one side, it creates a very fine, 25-degree edge angle. Many knives and double bevel broadheads are ground at 20 degrees on each side, giving you a total edge angle of 40 degrees. Additionally, I find that it’s harder for me to keep both sides of the edge perfect on a double bevel.

A guided sharpener or jig is hands-down the most effective way to sharpen single bevel broadheads—or any broadhead for that matter. My favorite is Work Sharp’s Precision Adjust Elite sharpening system—which will sharpen just about anything. If a broadhead is chipped, or I’m needing to re-set the edge, I can start with rough grit and take it down to a polished sheen at a precise angle. Another great tool is a 25-degree jig from KME sharpeners. Clamp the broadhead in there and use flat stones to hone the edge. The most important part of this style of sharpening is to mark the edge with permanent marker so you can see that you’re completely grinding out to the edge of the blade—otherwise you’re not sharpening anything. After grinding and polishing the edge, I’ll lay the flat side of the blade on a diamond stone and gently rub off the burr that’s pushed over to the back side.

The single most-valuable tool I’ve found for sharpening single bevels is a strop or multiple strops. Used with polishing compounds of varying grits, it’s easy to get single bevel broadheads terrifyingly sharp. Once an edge is established, a strop is the only touchup it will typically need, unless the edge is chipped—even after shooting through an animal. I’ve even taken lower-priced single bevel broadheads that don’t come hunting-sharp, and got them shaving sharp with just a strop and some patience.

Tuning is another holdup for some archers when it comes to shooting single bevel heads. If you don’t have a well-tuned arrow or bow, accuracy will suffer. This potential hang-up prevents many archers from choosing non-vented broadheads in-general, and many only shoot expandable broadheads because of tuning issues. If you’re using a solid broadhead and your arrow isn’t coming out of the bow perfectly, the air resistance on the broadhead will pull it off-course farther than your fletching can correct.

There’s no magic recipe for tuning single-bevel points. They should be concentric and spin true, after that, it’s all about the arrow and bow. One key thing to note is that with single bevel broadheads, you should use helical fletching to match your bevel. That means that you should use right-wing helical fletching if you’re shooting right-bevel broadheads. Both the fletching and broadhead will spin the arrow in a clockwise direction—the opposite is true for left-wing, left-bevel.

In my recurves, I find that I get more forgiveness in tuning when using single bevel broadheads matched with helical fletching—and they usually fly even better than my field points. I attribute it to the broadhead acting as a sort of mini fletching on the front, spinning the same direction as the vanes on the rear. If I don’t have a perfect tune, I find many double-bevel broadheads want to wind plane and spin off-target.

Although single bevel broadheads used to be associated only with traditional bowhunting, they’re gaining popularity among compound hunters, and with a good bow tune, you can absolutely use them.

Archery hunting equipment is a seemingly revolving door of things to debate and argue about, so are single bevel broadheads just the latest overblown trend? Can they really do what people claim, and are they worth it?

I’ve been using single bevels for a long time—and I don’t plan on stopping. I would say that based on my experiences of hunting big game animals in Alaska, most of the paraded benefits of single bevel broadheads are true—but they’re only part of the picture of success. There is no magic piece of gear that will suddenly make you a better bowhunter. It takes work and attention to detail.

I’ve found single bevels to be reliable, easy-to-sharpen, and deep-penetrating, but they don’t give license to take shots beyond your ability. There’s also no guarantee in the result. A few years back, I shot a black bear that was sitting facing away from me—and hit him right in the spine with a heavy arrow and single bevel broadhead. The spine stopped the arrow. I assume because the spine had some give, the broadhead didn’t split the vertebrae, and I had to run that bear down to finish a poor shot as quickly as possible.

In some cases, a single bevel’s penetration and bone-splitting characteristics will make the difference in recovery of an animal or not—that’s not hype. But having a well-tuned setup, picking your shot, and shooting accurately are much more important. No broadhead can make up for poor shooting.

Are Single Bevel Broadheads Right for You?

I’d be lying if I claimed no bias when it comes to single bevel broadheads. I love them. I’ve seen many examples of their performance in the field. More than anything though, I find that they fly great and they’re easy to keep deadly-sharp. In the majority of situations, a razor sharp, solid double bevel broadhead will do just as well as a single bevel. I’d have no qualms about using a regular 2- or 3-blade broadhead, but I can’t get them as sharp.

Are single bevels right for you? If you’re looking for a magic point to solve all your bowhunting problems, then no. Likewise, if you expect your experience to be the same as shooting throwaway expandable broadheads, then no. However, if you’re willing to work at getting a good tune, learn a little sharpening technique, and want to shoot a solid, non-vented broadhead, I think single bevel broadheads are the way to go.