Let’s play a little word association game. I’ll write some words, you then immediately say the first words that come... 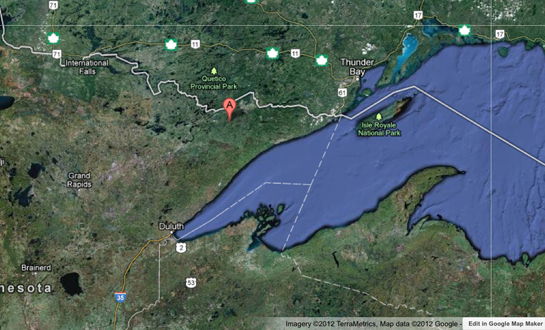 Let’s play a little word association game. I’ll write some words, you then immediately say the first words that come to mind when reading them…

Obviously, I can’t hear what you’re saying. But I bet I can guess a few of the words that came to mind.

What? You mean, the mention of the Minnesota’s Boundary Waters don’t conjure up images of sulfide mines? Well, it soon might.

The bill certainly has a pleasant-sounding ring. What it does, however, might not sit so well with those who value hunting and fishing opportunities in the Boundary Waters Canoe Area Wilderness. The Act authorizes a land swap of some 86,000 acres of school trust land with the federal government.{C}

What’s the big deal? Well, it’s believed that the school trust lands inside the Boundary Waters area are sitting atop a substantial amount of sulfide and copper. And because that land is located within the boundaries of the Boundary Waters Wilderness Canoe Area, it cannot be mined.

When Minnesota became a state in 1858, Sections 16 and 36 of every Minnesota township were set aside in trust to benefit public schools. The state could sell the land, lease it, use it, but any benefits or profits must be used to benefit public education. A Permanent School Fund was established to handle the profits and interest from those lands to benefit education.

Within the Boundary Waters Canoe Area is roughly 86,000 acres of school trust land. It is that land that Cravaack and the Minnesota House hopes to swap with the feds for national forest land just outside of the wilderness boundary, essentially removing the wilderness restrictions from the land and opening it up for mining and timber harvest. Cravaack defends the move by saying that the lands are not able to fulfill their intended purpose of benefitting public education because federal wilderness regulations prevent them from being mined, timbered or sold.

Opponents of the move say mining in near the wilderness area will have dire impacts on the Boundary Waters area.

The Boundary Waters are a unique place. The BWCAW spans about 1 million acres, stretching nearly 150 miles along the Canadian border and Canada’s Quetico Provincial Park. It’s bordered on the West by Voyageurs National Park.

The area contains 1,200 miles of canoe routes, a dozen hiking trails and about 2,000 campsites. It is a non-motorized area, meaning if you want to fish for the abundant smallmouth and walleye in its waters, you must do so by paddling.

It’s hard to believe the claims that large-scale mining and timber operations in the heart of the area will not have significant impacts and the long-term ecological impacts of sulfide and copper mines on fisheries have not been proven to be positive.

Yet Cravaack has claimed that his bill maintains federal air and water standards, upholds the Endangered Species Act, and generates roughly $26 million for education through mining and logging.

The Minnesota Senate has not yet moved on the bill. Numerous organizations are working on both sides of the issue and the battle lines are clear and predictable: Wilderness vs. progress. Jobs vs. recreation.

Where do you stand?