What You Can Learn From Waterfowl Bands and Collars

Fewer than one in a thousand ducks and geese sport leg bands or collars, making them a rare and unusual... 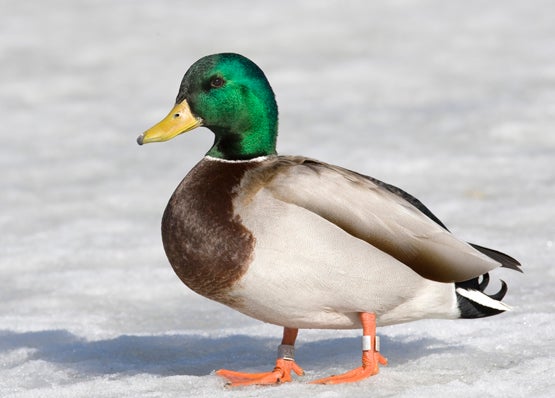 Fewer than one in a thousand ducks and geese sport leg bands or collars, making them a rare and unusual trophy for a hunter. Each has a story to tell, tying its wearer to a particular place and time, and telling the tale of its journey. Their recovery also provides information crucial to the proper management of our continent’s waterfowl populations.

In 1902, Dr. Paul Bartsch of the Smithsonian Institution was the first to band birds in North America. Today, research biologists using government-­approved equipment band migratory waterfowl. They affix an aluminum band that is marked with a unique number sequence to a bird, recording its species, sex, and age, as well as the date and location of the banding. From subsequent recoveries, the researchers can determine a great deal.

Migration Routes and Patterns
Band returns can tell us if certain species, or even entire populations from a particular nesting area, use only one flyway or migrate south using one, then return north by another. They can also tell us where important stopover and wintering areas are.

Longevity
Band returns provide insight into how long certain species live, which is also a factor in setting seasons and bag limits. Here are a few noteworthy age records:
▶ Lesser snow goose and brant: 27 years
▶ Canada goose: 28 years
▶ Mallard: 27 years
▶ Black duck: 26 years
**
Mortality Rates**
Biologists can accurately estimate overall mortality rates for a particular population, flyway, or species by the proportion of banded birds harvested each fall. They can then assess whether the hunting season in a flyway or state is too early or late, or too long or short for a particular species or population, and make annual adjustments as needed.

Rewards AND Collars
Some geese sport neck collars, the colors and numbers of which can be easily read from a distance with binoculars or a scope. This allows researchers to identify and track individual birds without having to capture or harvest them. Canada geese are commonly marked with neck collars and colored leg bands. Small subspecies–including Richardson’s, cackling, and Aleutian geese–get smaller three-digit collars. Large Canada geese get four-digit collars, except in the Atlantic Flyway, where bib-type collars developed to reduce icing are used.

As part of an extensive effort to track populations and movements of Canada geese, biologists use orange collars in the Canadian portion of the Mississippi Flyway, and blue collars in the U.S. portion. The Arctic Goose Joint Venture uses three-digit collars of seven different colors to signify different populations of white-fronted, small-form Canada and cackling, lesser snow, and Ross’ geese.

Band collection is not only beneficial, but it can be lucrative. As part of a study to learn the effects of switching from mail to phone-in or e-mail band reporting, banders apply $100 reward bands to some birds.