Of all the dangers to our dogs, grass seems like the most benign concerns a hunter could have to worry... 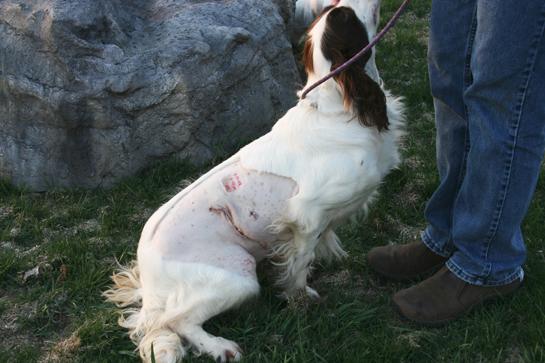 Of all the dangers to our dogs, grass seems like the most benign concerns a hunter could have to worry about. Wrong.

Grasses like foxtail barley, cheatgrass, Canada wild rye and speargrass (needle & thread) produce some of the most hazardous mean seeds around.

The seeds of these plants, some of which are planted as part of the CRP initiative, can be deadly to dogs. The shared characteristics of the seeds are what make them so dangerous: sharp, pointed tips with barbs pointing in the opposite direction of the pod’s main point. This barbed pod slowly works its way into a dog’s lungs, if inhaled, or into and through the skin, if lodged into the hair, eventually penetrating the skin’s surface and entering body the body cavity.

The grasses are so prevalent that just about everyone in the United States is at risk to one degree or another. I know that the 5-acre field in front of my place is filled with cheatgrass. Both Kona and Hoss have had sneezing fits after inhaling the awns and I’ve picked cheatgrass awns out of Kona’s coat repeatedly; some so buried that only little wisps show of the main seed.

The scary part when it comes to grass awns is that it’s a slow death. And death is a very real possibility. The grasses have to penetrate the surface, either by puncturing the skin and working their way inwards or by being inhaled, and then the body has to react to the intrusion.

Unfortunately, the body reacts the same way it does for other health problems, including tick-borne illnesses, cancers, pneumonia and fungal infections among them. While veterinarians spend time evaluating and treating those possibilities, the grass awn continues to move throughout the body, spreading disease and infection as it goes.

To that end, Cathy Lewis of meanseeds.com has started to attempt to organize educational material for veterinarians and dog owners alike, as well as to collect case histories online.

“The owner is the dog’s best hope. There are so many of us that go to a suburban vet center, and we might be the only working dogs they see and when the dog gets sick they don’t recognize it and get on it quick enough and that’s when you start to see high losses of dogs’ lives,” says Lewis, who has spent more than $30,000 dealing with the problem in her own field-trial competing English springer spaniels and who cites not just a financial burden but also the emotional strain that accompanies the issue. “If we can educate the owner, then they can refer their vet to literature so that the dog has a chance of surviving.”

What to look for: Perhaps the toughest part is actually discerning that grass awns that are responsible. That’s because a dog might not show symptoms of infection for 3- to 6-months after contact with the grasses.

When evaluating your dog’s condition, Lewis says that your gut instinct might serve as your best indicator. “It’s such a vague pattern that is presented. If you’re training regularly and they’re doing great and then suddenly only one out of four sessions they’re doing well, and you have reason to believe they’ve been exposed, then it’s time to start thinking about it,” she says. “Perhaps the biggest red flag is that the dog is not doing well and you see a temp between 103 and 104, that range seems to be about consistent, then you need to get to the vet and insist this might be something; especially if there are no other obvious reasons. And obviously if an abscess pops up on their side.”

Forms or locations of the infection: In a paper by Dr. Pat McInteer and Dr. Jim Mills, as well as other vets, three main forms of grass-awn infection are cited:

Subcutaneous form: Takes place under the skin and most commonly on the side of the dog; this for yields the best treatment results and lest death loss because it’s most easily diagnosed and doesn’t affect critical organs.

Abdominal form: Extreme and intense pain in the abdomen and back occurs. Most likely due to swallowed awns, the intestinal wall is penetrated and infection tracts result as the seed moves through the body. Flushing of the draining tract and long-term, sometimes expensive, medication have yielded excellent results.

Thoracic form: The most difficult form to diagnose, the thoracic infection also causes the highest loss of life. It’s difficult to diagnose this form of infection because it’s so vague (only poor performance and lack of stamina over weeks and months are often the only indicator).

I urge you to check out Lewis’ site, meanseeds.com and educate yourself on the subject, symptoms, most common grasses and treatments, and, perhaps more importantly, educate your veterinarian on the subject. I’m printing off copies of several papers from the site and giving them to my vet. What’s the worst that could happen? They learn something new.