Gun Dog Training Tips: How to Teach a Dog to Stay

There was a good question asked on the message board from dovehunter2, and some good advice was given – along... 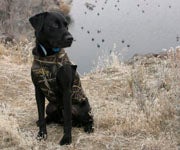 There was a good question asked on the message board from dovehunter2, and some good advice was given – along with some stuff I don’t exactly agree with. Here’s the question:

I just got a new dog and am trying to teach him to stay. He knows sit and fetch, but any advice on stay? Any advice will be appreciated.

A few answerers asked some good questions, namely, how old is the dog? And, what are you planning on using him for? There is some good advice in there, too, but some might or might not be applicable, depending upon your intended use (i.e., incorporating the sit whistle, if you’re going to use hand signals, etc, in the future, introduce the whistle now; if not, don’t worry about it—use the verbal command).

1. Age Matters
I’m going to address this command assuming the questioner has a very young pup. If you have an older dog, you basically use the same steps, but can begin to phase out the treats/praise and hold him a little more accountable sooner – that doesn’t mean you command and reprimand for noncompliance; you’re still teaching the dog what the proper behavior is.

The younger a dog, the shorter his attention span, ability to retain info and focus on the task at hand is going to be. So keep your lessons short, and the same goes for the time you require the pup to “stay” short and the distance you move from the dog. Build slowly. A second or two and only a step or two from the dog at first is plenty. Reward the behavior, but don’t get overly excited. Staying calm during the exercise will go a long way to keeping his butt on the ground – as will performing the exercise in a sterile environment with few distractions.

2. Start With Sit
As said in the Answers, work on his heel and sitting when coming to a stop (after a couple of seconds of a pause at sit, of course, stop that forward motion and add the “settle in” to the sequence). Then just a take a pivot-step in front and face him while holding the leash. You can then give the “stay” command if you want, but it has become practice these days that “sit” means to sit until released. You can enforce the sit command: If pup lifts his butt up when you step in front of him, simply lift back up on the leash and step back into the dog; your forward motion into him will likely stop his forward motion of coming to you. Lifting on the leash will also likely remind him of the command and will also keep him from moving too far from the exact location. The second his butt touches the ground, repeat the command, wait a second and take your step backwards (you can hold up a traffic-cop hand signal if you wish – I tend to do so, although it’s probably not necessary; we humans have our quirks, too).

Again, build slowly. The younger the dog, the shorter the time to sit and the closer you will be at first. As the dog’s comprehension progresses, the farther and longer you can progress from him – including circling him, stepping out of sight and introducing distractions.

3. Take Your Time
A word of warning: Don’t move too quickly into this behavior. Wait until he is performing it very, very well in a sterile environment. If you move too far, too fast, and the dog decides to break, your only recourse is damage control – I prefer to, if at all possible, always set it up so the dog succeeds and we have as few setbacks and “ah-ha!” moments: Those times when the dog learns when/where/how he can escape a training exercise with unwanted behaviors.

4. Don’t Call Off Sit
Here is perhaps the biggest tip I can give you when it comes to teaching and using the “sit/stay” command: Never call a dog off of sit/stay. Always return to the dog and assume the heel position.

Upon returning, wait a second or two, command heel and start walking. If you sit/stay the dog, then walk away and start calling the dog to you, you’re training anticipation – the dog is going to break because you’re training him to. You will likely fall into a routine, and the time interval you make the dog sit/stay will be roughly the same. Do your best to vary that time interval and don’t call him off of sit. Return to him, praise his behavior and resume the exercise.

5. Get With the Program
There are several good programs out there, including the recommended Evan Graham’s Smartwork System and Tom Dokken’s Retriever Training book.

However, if you’re looking for a complete obedience program, I’d also recommend Dan Hosford’s DVD series: Gun Dog Obedience, part one and part two. Each DVD is in excess of three hours in duration, and when combined offer about seven hours of systematic, lesson-based instruction. There’s even a TV show that features puppy training, in-field hunting situations with real dogs in real scenarios and training segment illustrating how to fix those issues.

Dan’s kennels are just down the road from my place and I spend a great deal of time there. I have watched filming for the DVDs and have participated in some of the television hunts. What he’s doing is pretty cool from a consumer’s vantage: Dogs in actual phases of training are being shown so that you can see real-life occurrences and learn how to fix them. It’s good, detailed stuff.