We’re currently living in the golden age of duck and goose hunting. Waterfowl hatches have been topping record marks in... 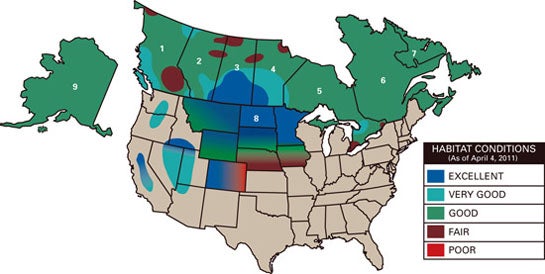 We’re currently living in the golden age of duck and goose hunting. Waterfowl hatches have been topping record marks in recent years and 2014 is starting off like those same record years.

Ducks Unlimited has released their breeding grounds surveys, and overall, most of the Prairie Potholes Region is in good, very good or excellent condition – with only a few spots in fair to poor condition.

But breeding-ground conditions are only part of the equation; a lot has to happen and can happen before the fall flight begins. Hens have to lay a clutch of eggs, those chicks need to survive everything from unpredictable weather to predators, and then local conditions play a role in how your area experiences the fall flight. Stay tuned to Outdoor Life magazine, as I’m working on a piece that explains the correlation between early-season estimates and actual harvest stats – and how areas of the country will be affected.

With all that said, the breeding-ground survey does give us a preliminary look at the possibility of what we can expect.

“Abundant precipitation last fall, adequate winter snowfall and a good frost seal across much of the Duck Factory resulted in water refilling wetlands this spring,” said Rick Warhurst, DU senior regional biologist at the Great Plains Regional Office in Bismarck, in a DU press release. “Wetland conditions are good to very good across a large portion of the Prairie Pothole Region and large numbers of waterfowl have settled in the region this spring.”

The region, which extends 300,000 square miles from Iowa to Alberta, produces up to 70 percent of the continent’s waterfowl. The wetlands and grasslands provide safe nesting habitat for many different species of migratory birds. Sustainability of today’s healthy waterfowl populations depends on intact wetlands and secure grassland habitat for nesting in the future.

“DU remains concerned about the effects of wetland drainage, continuing loss of native prairie and loss of Conservation Reserve Program grassland in the PPR,” said Johann Walker, DU director of conservation programs in the Dakotas and Montana.

The PPR’s small, seasonal wetlands are the key to the productivity of this region for breeding ducks, and abundant winter precipitation has set the stage for improved wetland conditions on many key waterfowl breeding areas. These wetlands provide protein-rich invertebrate foods that female ducks depend on to produce a clutch of eggs. Invertebrates are also important to ducklings in their early life stages.

For a more detailed look at the various areas surveyed, check out this page on the Ducks Unlimited website.