Dry-Fire: The Key to Better Rifle Accuracy and Trigger Control

I had just missed my third consecutive shot at a 600-yard, man-size steel target when Rifles Only shooting instructor Jacob... 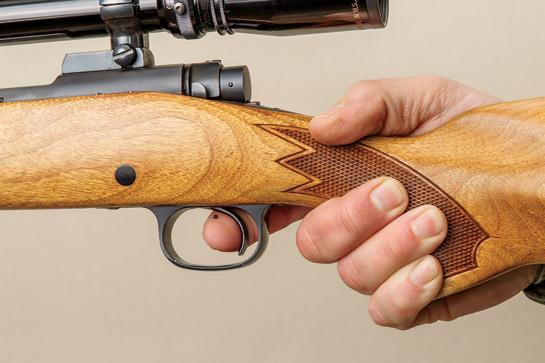 I had just missed my third consecutive shot at a 600-yard, man-size steel target when Rifles Only shooting instructor Jacob Bynum tapped me on the shoulder.

“Unload the gun,” he said. I was about to chamber another round, but I followed his direction and emptied the rifle. “Now shoot.”

I did. Click. “Do that until you’re ready to hit what you’re aiming at.”

This is why his advice works.

Know Your Trigger
When you were a kid, your dad probably told you that the shot should surprise you. But you’re a big shooter now, and according to Bynum, the best marksmen know exactly where their trigger is going to break. So get behind your rifle and squeeze the trigger smoothly until it goes “click.” Remember that spot. Keep doing it until the feeling is burned into your muscle memory.

Eliminate Flinch
This is important for anyone sensitive to recoil or new to high-caliber rifles. After shooting a handful of rounds, dry-fire through a series. Even though you know the gun isn’t going to fire, I bet you’ll flinch. Look through your scope as you do this. If the crosshairs jump or wiggle, even a little, you flinched. Take a breath, relax, and keep at it until the crosshairs don’t move.

Go Straight
Pulling the trigger a little to the left or right will move your shot off target, Bynum says. The only way to really tell if you’re pulling the trigger straight back is to watch while you squeeze. So, take your head off the gun and practice your trigger pull. If it looks like you’re hooking the trigger to the right or pushing it to the left, make an adjustment and repeat that pull until it feels natural.