A classic lever gun gets a tactical makeover

I’ve always liked guns with personality, and this new iteration of the Browning BLR 81 Takedown certainly qualifies. Browning refers to this as the Black Label model, and even a cursory glance will tell you this is a different animal from the first BLRs that rolled off the production line back in 1969.

There’s a whole lot of Picatinny happening here, with a two-part rail that runs along the top of the rifle and two rails positioned at the 3 and 9 o’clock positions at the front of the forend. Flip the rifle belly-up and you’ll see a couple of flush-mount cups for sling attachments. And, of course, there’s the sleek flash hider sitting at the end of the 16-inch barrel. What’s going on here?

A cynical observer might say that Browning is trying to cash in on the tactical fad by slapping some black-rifle accoutrements on a stodgy old lever gun. However, I don’t share that assessment. In fact, I think these enhancements, though they could benefit from some refinements, fit this rifle rather well.

Performance
▶ The BLR I evaluated impressed me on many levels. First off, its craftsmanship is top notch. The satin-black finish on the metal is smooth, even, and lustrous, and contrasts nicely with the gray laminate stock. The fit and finish throughout the rifle is quite good. The butt pad, for instance, has been affixed to the stock expertly.

Mechanically, the rifle operates as nice as it looks. Removing, loading, and inserting the box magazine are intuitive operations. The action cycles in a smooth and positive manner, making for fast shooting. The rifle fed, extracted, and ejected all of the 200 rounds or so I put through it without any issues—though on long shot strings the rifle heats up considerably and you need to keep your fingers out of contact with the barrel and barrel band. My BLR was chambered in .223, but it is also being offered in .308 Win.

Perhaps the most pleasant surprise the rifle had in store was its accuracy. It shot really well, especially for a rifle that is both a takedown and a lever action—two characteristics that aren’t usually associated with tight groups.

The rifle showed a distinct tendency to group with four tight shots and one flier. Part of this might be attributed to the trigger, which broke at an average of 7 pounds 4 ounces on my sample and required a lot of effort to trip cleanly. Mechanically, this was the one sour note the BLR struck during the test.

Even so, group sizes averaged 1.696 inches with bullets weighing between 50 and 60 grains. I also shot some 77-grain loads from Nosler, but the barrel’s 1-in-12-inch twist rate wasn’t fast enough to stabilize those projectiles, which keyholed through the target.

Given this type of performance, there isn’t much this rifle can’t do within the scope of a .223’s capabilities.

Sight Options
▶ I topped the rifle with one of the new Weaver 1–7×24 Tactical scopes that has a mil-dot reticle in the first focal plane and an illuminated central dot in the second focal plane. This optic is a good match for this rifle, as it can be dialed down in magnification for fast shooting up close, while at 7X (and with the benefit of the reticle’s holdover marks) it had no problem ringing steel plates at 300 and 400 yards.

But the benefit of that full-length Picatinny rail is that the shooter can configure the rifle many ways. A scout-style scope with a long eye relief, a red-dot sight, a traditional variable-­power scope, a ghost-ring setup—this BLR can accommodate them all.

Refinements
▶ As far as the rifle’s limitations go, the list isn’t long, but here’s what I’d love to see changed. First, it needs a better trigger. The rifle’s accuracy would doubtless improve, both when shooting for precision on paper (or at game) and during speed drills on steel at short yardages. A faster twist rate on the barrel would be helpful as well, in order to take advantage of some of the great heavy-for-caliber .223 loads on the market.

A higher comb height, or an adjustable cheekpiece, would be a smart addition, too. The stock’s geometry was configured for iron sights placed right on top of the receiver. With the additional height created by the rail, rings, and a scope, the shooter’s cheek tends to float high above the stock while establishing a good sight picture. That said, because of the mild recoil of the .223, I never had much issue maintaining the sight picture from shot to shot.

The manual safety is one of the more clever features on the Model 81. With the hammer at half-cock, pushing up on the underside of the hammer causes it to pivot forward in such a way that it no longer makes contact with the tail of the firing pin. 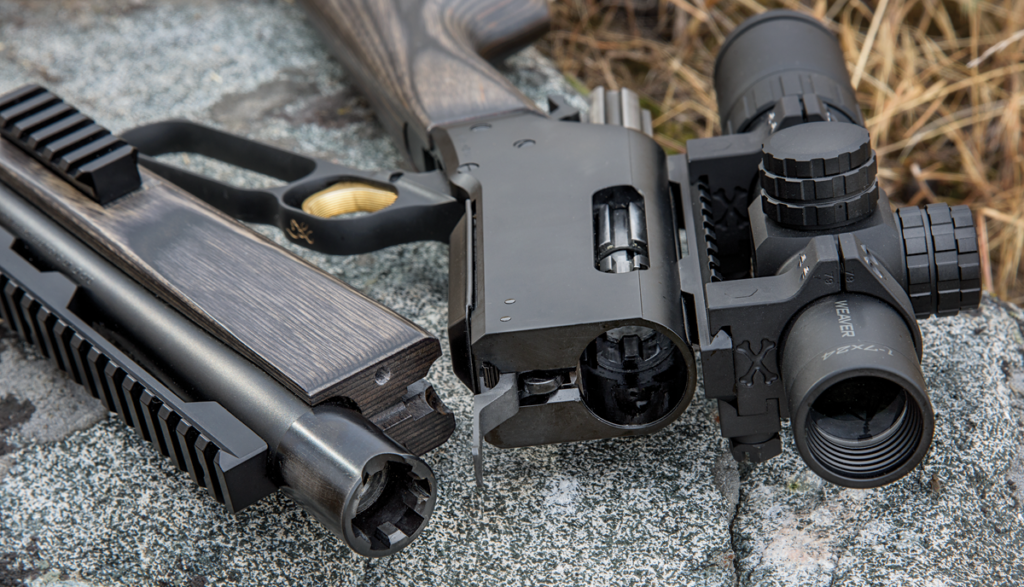 The takedown mechanism is simple. Open the action enough to disengage the floating bolt head from the barrel, pull down on the takedown lever in the forend, and pull the rifle apart. Once this is done, the rifle transports easily, either in a vehicle or a bag.