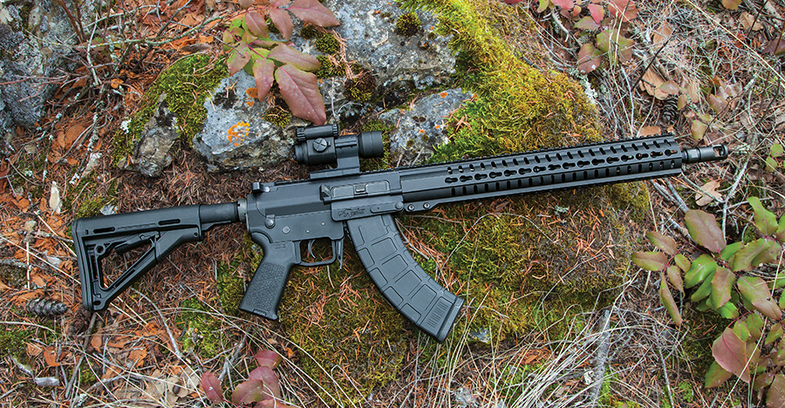 Ask 10 different shooters to define the ultimate general-purpose rifle and you’ll likely get 10 different answers. But I’m willing to bet that none would describe a firearm like the new CMMG Mk 47. This gun is called the Mutant as a nod to its curious configuration. It is an AR-style rifle chambered in the classic AK-47 cartridge, the 7.62×39 Soviet.

A logical question to ask is, why do this? After all, we have other options for AR-15-sized uppers to fire .30-caliber rounds—the .300 Blackout and .30 Rem. AR to name two—and those rounds have designs that allow them to feed through standard AR magazines. The 7.62×39, in contrast, is inexorably linked with the iconic banana-shaped magazine that will not work in a standard AR lower. This means a gunmaker needs to build a dedicated lower to make a 7.62×39 AR run, and that, in turn, jacks up the price.

Fortunately, cold, hard logic doesn’t always apply in the world of gun manufacturing—how else to explain the enduring popularity of the 3 ½ inch shotgun? So the Missouri-based CMMG went ahead and built it anyway.

Easy to Tweak
I’m glad they did, because there’s more to this rifle than initially meets the eye. First, consider the benefits of blending these two platforms. The fans of the AK are legion and dedicated. I include myself among their numbers. But despite the passion for them, AKs have some limitations. When it comes to customization, there’s nothing out there that can match the user-friendly modularity of the AR. Swapping out components and adding accessories like optics and lights is a snap. With AKs, all this is possible as well, it just isn’t nearly as simple.

The Mutant has a rail extending from the rear of the receiver along the entire length of the 15-inch handguard, offering plenty of room to mount optics and sights. The handguard also has KeyMod attachment slots running along its length at the 3, 6, and 9 o’clock positions. This offers flexibility for customization without adding much weight.

The Mutant uses standard AR hardware elsewhere, too. The stock, trigger group, buffer tube, and gas system conform to AR mil-spec standards, meaning they can all be swapped out. The Mutant ships with a Magpul pistol grip and a Magpul six-position adjustable stock, both of which are top-notch components. All told, the ergonomics of the Mutant are excellent.

The rifle’s simple, clean design makes it ready to perform any number of tasks. With a red-dot sight mounted, like the Aimpoint ACO shown above, it is configured for personal protection and Close Quarters Battle (CQB) duties. Put a 1X–4X or 1X–6X scope on it and you can take it to your next 3-Gun competition. Top it with a 2.5X–10X and you’re ready to hunt. It is a general-purpose jack-of-all-trades.

The Round
One huge draw of the 7.62×39 is that it is economical. There are ample supplies of cheap, surplus ammo to shoot. There’s no other .30-caliber round that compares in this respect. It is also an excellent personal protection round. One only needs to consider its history on the battlefield to grasp this.

As a hunting round, however, it isn’t the first option that leaps to mind. For deer and other big game, it has never been given much consideration by the purists and pundits. Well, you might find this surprising, but ammo manufacturers are having a devil of a time keeping up with the demand for the 7.62×39 loaded with hunting bullets.

With this in mind, I shot the CMMG with two good hunting loads in addition to the cheapo surplus stuff. The rifle functioned perfectly even with the junky ammo, though the accuracy wasn’t anything to get excited about.

Shooting the quality ammo, the rifle’s performance improved markedly. I used Hornady SSTs and Federal Fusion bullets, both weighing 123 grains. Overall five-shot accuracy averaged 1.557 inches, though the rifle preferred the Hornady ammo by a bit. Average group size with the SST was 1.459 inches, while the smallest group measured 0.798 inches.

About the only thing I’d change on this rifle if I were to use it for competition or hunting is the trigger. On my sample, it broke at a coarse 6 pounds 5 ounces. With a crisp aftermarket trigger set between 2 ½ and 3 pounds, the rifle would be good to go, whether you’re hauling it to the range or into a deer blind.

The magazine release is copied from the standard AK-47. The paddle in front of the trigger guard is ambidextrous; once you acquire the feel for rocking the magazine into place, it can be recharged quickly.

The bolt carrier group (BCG) is based on a shortened AR-10 design. Compared to a standard AR-15 BCG, it has additional metal around the bolt face for better strength and durability.