Semi-auto pistols are the most popular choice for sport or self-defense, but becoming proficient with them is more complex than... 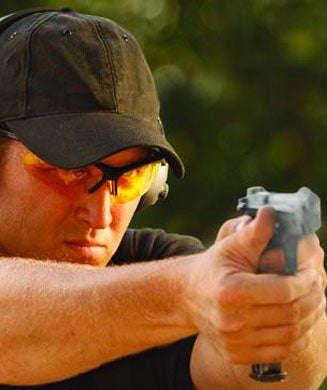 Semi-auto pistols are the most popular choice for sport or self-defense, but becoming proficient with them is more complex than just aligning the sights and pulling the trigger. You have to keep the pistol running, and that means both keeping it fed and quickly resolving malfunctions. Here is how the experts accomplish this.

Only in Hollywood do semi-auto handguns never run out of ammo. They do in real life. And with more states placing restrictions on magazine capacity, they will do so quicker. Whether you’re involved in self-defense or competition, an empty gun is not desirable.

The ability to quickly reload a semi-auto handgun is the hallmark of an expert, and it involves a number of individual movements that can be broken down into simple, decisive steps. These should be practiced until they become a single, fluid motion.
**
Step 1: Dump the Spent Magazine**
As the slide locks back after the last round, immediately hit the magazine release button. With ambidextrous magazine releases (or a reversible release button for lefties), this is done with the thumb of the shooting hand. In the same motion, cant the magazine well inward 45 to 60 degrees toward the body’s centerline to the side that the new magazine will arrive from. For a right-handed shooter carrying extra magazines on the left side, the mag well goes to the left. If your gun allows the magazine to drop freely, the support hand should already be off the gun and moving to the new magazine. If the magazine is not a drop-free design, the support hand lingers for a moment to strip the empty mag from the gun and discard it. These steps clear the empty mag from the gun and get it out of the way.

Step 2: Tuck the Gun into Your Body
With the magazine cleared and the gun canted, bring the elbow of the gun hand sharply back until it contacts the torso, holding the gun just below eye level. This creates a consistent and repeatable position for the gun to receive the new magazine, while allowing you to keep an eye on the targets and on the gun.

Step 3: Grab a Fresh Magazine
By this time, the support hand should already be wrapped around a fresh magazine. The proper position of the magazine in the hand is with the bullets facing forward. The index finger of the hand rests along the front edge of the magazine with the fingertip just below the exposed bullet (see below, left). The three remaining fingers secure the magazine on the outside, while the thumb locks onto the magazine on the inside. This hand position encourages a smooth motion, bringing the new magazine up into the magazine well. This happens because the pointer finger on the magazine will easily find the hand wrapped around the stock of the gun–a “hands find hands” situation. Carry spare magazines with the bullets facing forward in the mag pouch as part of this technique.

Step 4: Recharge the Pistol
Insert the new magazine. With the gun in the Step 2 position and the mag well canted, it’s simple for mag to meet mag well with the pointer finger leading the way. Once the magazine enters the well, follow with the heel of the hand to seat it firmly. The thumb is then in the proper position to ride upward along the grip to hit the slide release lever, while the rest of the support hand rolls onto the proper shooting grip.

Step 5: Get Back on Target
As soon as the slide release is hit, rotate the gun back to vertical and push it toward the target.

When properly executed, the time between the last shot from the empty magazine and the first accurate shot from a new magazine (measured on an electronic timer) can be less than 2 seconds for the physically gifted, and around 3 seconds for the rest of us. An empty semi-auto doesn’t have to stay empty for long.

Even the most meticulously maintained semi-auto pistol can malfunction. Often, the causes of these stoppages are not even related to the gun, but to some issue with the ammunition or magazine. (This is one reason why marking your magazines is a good idea: It will help you keep track of their performance.) Regardless of why it happens, eventually it will. And unless the gun experiences a catastrophic failure due to a parts breakage, the common malfunctions can be cleared and the gun returned to proper operation in what amounts to the blink of an eye. Here is how to clear common malfunctions quickly.

Smokestack Jam
This malfunction earned its moniker because a fired case that fails to clear the ejection port and is trapped by the returning slide sticks up above the slide like a little smokestack. It is normally caused by a weak powder charge but can also occur if the chamber of the gun is very dirty. The end result is a gun stoppage, with the new round unable to feed into the chamber. The sidebar (right) explains how to clear it fast.

The Dreaded “Click”
The trigger is pulled, but instead of a bang, the shooter gets a click. There are two common causes for this: (1) the magazine was not fully seated and the slide rode over the round without chambering it, or (2) the cartridge has a defective primer. The correction is the same for both–the tap-and-rack drill.

The support hand comes off the gun and the heel of the hand slaps the bottom of the magazine to ensure it is fully seated, then immediately moves over the rear sight of the gun and vigorously racks the slide. This removes a defective round if present and chambers a new one, while also resetting the striker on striker-fired pistols.
Both of the above malfunctions can be cleared with nothing more than rapid hand movement. The next two common malfunctions require the magazine be removed from the gun.

Tip Up & Double Feed
A tip-up jam occurs when a cartridge hits the feed ramp but doesn’t find the chamber. Instead, it jams its tip under the barrel hood. A double feed results when a cartridge is chambered but is followed immediately by a second round coming out of the magazine and attempting to join it in the chamber. That round is now jammed into the back of the chambered round. Both are normally caused by worn magazine feed lips or a malfunctioning magazine.

Regardless of which jam occurs, the fix is the same. Strip the magazine from the gun, rack the slide vigorously a couple of times to make sure that you’ve cleared the chamber, slam in a new magazine, and rack the slide to chamber a round.

Don’t expect the magazine to drop free. It will be jammed in by the rounds and have to be stripped by the support hand. Also, don’t count on reinserting the same magazine. Often a bullet will be tipped upward between the feed lips and will not feed.

The proper way to grip a magazine is with your index finger aligned with the leading edge of the magazine and positioned so the tip of the index finger is below the bullet on the top round. By placing your magazines with the bullets facing forward in your magazine pouch, your hand will naturally assume this grip.