Photos by Yamil Sued Glock’s model 42, introduced earlier this year, joins the ranks of the numerous pocket-size .380s that... 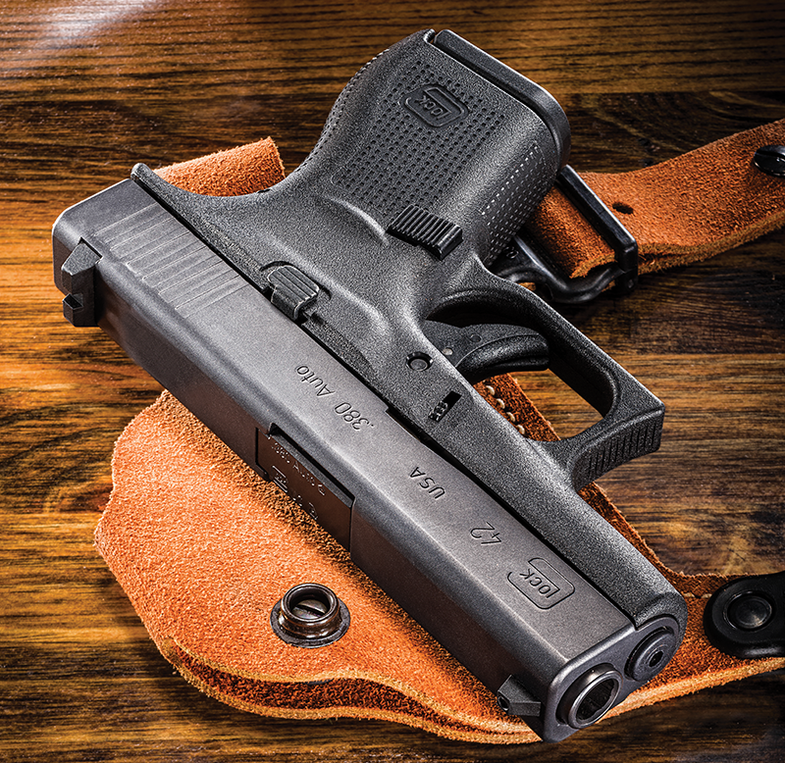 Glock’s model 42, introduced earlier this year, joins the ranks of the numerous pocket-size .380s that have rolled off gunmakers’ production lines in recent years.

The appeal of these pint-size pistols is that they are easy to conceal, simple to shoot, and work well as either a backup gun or a primary firearm when carrying something larger isn’t feasible.

The biggest issue with any gun for personal protection is reliable operation, and as a general rule, the smaller the caliber, the more finicky a firearm tends to be. Given that the .380 is at the light end of the ballistic spectrum, this is a relevant concern.

Torture Test
With that in mind, I took my sample Glock 42 and tried my best to beat the snot out of it. During the evaluation, I put 320 rounds through the pistol, using four different types of ammunition. Its performance was nearly flawless.

That “nearly” might seem like a red flag, but it really isn’t. The pistol malfunctioned once, but for an understandable reason. At one point during the test the gun didn’t go all the way into battery after a shot. But that was because I had taken the pistol—while it was empty and with the action open—and ground it into the gravel and sand at the shooting range with my boot in order to get enough grit in there to gum up the works. After I removed the slide and wiped down the interior, it ran once more without a hitch. In truth, the M42 impressed me to no end.

How the M42 shoots is where it really shines, however. I did numerous drills with the pistol. Most of the shooting was up close on single and multiple targets. It handled everything easily. The profile of the gun is smooth, so drawing it from concealment was never an issue. Managing its recoil was not a problem, and the large dot on the front sight was easy to acquire (and reacquire), so I was able to empty the gun as quickly as I wanted.

The pistol handled well during movement drills and while being shot single-handed, with both the dominant and the weak hand.

During reloads, most times the empty magazine would fall clear of the frame, though at other times it was necessary to strip it clear. The two magazines that come with the pistol hold six rounds each.

The magazines don’t have any type of extension on them, so my grip consisted of the middle and ring fingers around the stock, with the pinkie wrapped beneath the magazine. This didn’t hinder the pistol’s performance in any meaningful way.

The stock is plain, with no finger grooves and only minimal checkering. Likewise, the cocking grooves on the slide are not very deep. All of this is in keeping with the desire to make the gun as appealing as possible for concealed carry. The lack of “grippy” elements means that it can be drawn from a holster, a pocket, a handbag, and other off-body carry configurations with ease. Empty, it weighs just 13.8 ounces. I would forget that I had it on me while carrying it.

Unusually Accurate
The trigger pull on the pistol is moderately stiff. While dry-firing, I found the trigger to be slightly heavy, but during actual shooting, I never felt that it hindered my marksmanship or speed.

Speaking of marksmanship, the M42 is surprisingly accurate. Just for fun, I set up a man-size target at 100 yards and had no problem getting hits on paper.
The ultimate measure of a firearm’s utility for personal protection is whether you would actually use it. In the case of the M42, I would carry it without hesitation. It is reliable and portable, points easily, and, like other Glocks, doesn’t have any type of external safety that needs to be manipulated. Just draw the pistol and it is ready to go. Whether as a backup gun or as a primary gun when deep concealment is called for, the M42 is a pistol you can count on.

When you’re training, avoid the habit of taking well-aimed shots one at a time. These tips will keep your practice realistic:

1. Shoot from concealment: Get used to drawing and shooting from the type of clothing and carry method you plan to use.
2. Shoot on the move: Practice shooting while moving forward, backward, and to either side.
3. Vary the distance: Even though most self-defense shooting scenarios are up close, it pays to hone your skills from handshake distance to 25 yards.
4. Use your weak hand: Devote a portion of each practice session, whether you’re dry-firing at home or using live ammo on the range, to shooting with your off hand.