Whitetail Tactics: Hang and Hunt When Time is Running Out

It was 11:30 p.m. last Friday and Michael Turbyfill of Whitetail Properties and I were staring at a big map... 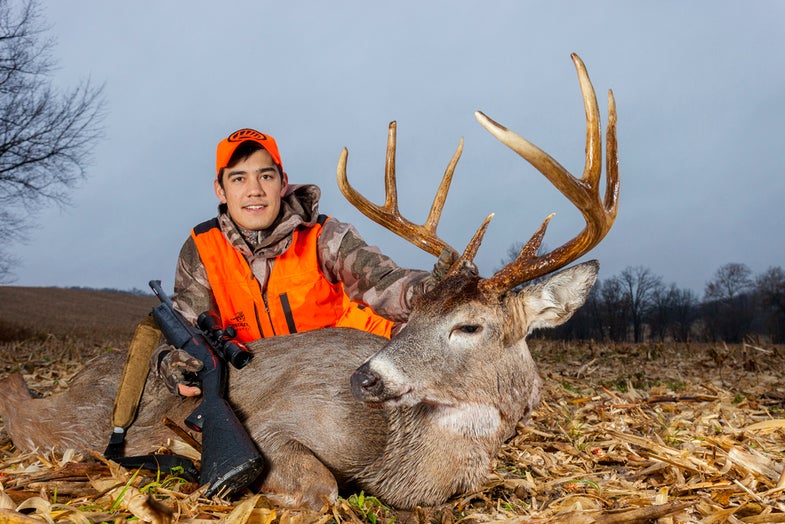 It was 11:30 p.m. last Friday and Michael Turbyfill of Whitetail Properties and I were staring at a big map of the Illinois farm we were hunting. After spring scouting, running trail cameras for months and then bowhunting for a week, we thought we finally had the deer patterned on the cornfield at the south end of the property. But we had a problem: The next morning was calling for south winds and warm, rainy weather. All of our stands around the field were set up for a north wind.

We decided that Turbyfill would hang a stand on the northern timber line (see orange dot below) in the afternoon and I’d sneak into it around 2 p.m.—after my morning hunt but well before the deer would be out in the field feeding for the night (don’t feel bad for Turbyfill, he already took a great buck this season).

The plan went off without a hitch. Turbyfill found a perfect pin oak on the edge of the field that would hide a hunter but also offer clear shooting lanes, and I got settled in during the middle of the afternoon without bumping any deer. Right before last light, I spotted two good bucks and four does making their way to the middle of the field. They were just far enough west that they couldn’t smell me. With shooting light fading fast, I watched the deer come around a corner, found the first buck in my scope, and squeezed the trigger (more on this part in a post next week). After climbing down, I found the buck—my biggest ever—about 75 yards away laying dead between the corn rows.

If we hadn’t decided to hang that stand and hunt it the same afternoon, I never would have shot that deer. Here are a few quick tips for your own successful hang and hunt:

1) Go early
Even if you know the deer won’t show up until last light, get to your set early and let the woods quiet down. It will give you time to range different landmarks, and you never know when deer might show up (it’s critical to not blow any deer out of the area).

2) Go light
We used Lone Wolf Alpha II hang-on stands, which are super light and surprisingly comfortable to sit in. But, there are plenty of good, lightweight hang-on stands out there. You’ll want to be able to carry the stand, sticks, and all of your hunting gear in on one trip. Climbers obviously work great for this type of hunting, but they limit number of trees you can sit in.

3) Clear good shooting lanes
Deer are used to hearing branches break and twigs snap, so don’t sacrifice shooting lanes in order to be quiet. Take some time to clear a few good lanes with a handsaw. Be as quiet as you can, obviously, but it’s okay to make a little noise in the middle of the afternoon.

4) Control your scent
Now is not the time to scout. Pick out a tree ahead of time if possible to minimize the amount of walking you do in the area. Don’t poke around the setup looking at new rubs or scrapes and don’t touch any foliage with your bare hands. This will leave scent and make it more likely for a mature buck or veteran doe to bust you.