Speed versus precision. In dynamic shooting situations—whether while hunting or in competition—you’re going to have to trade one of these... 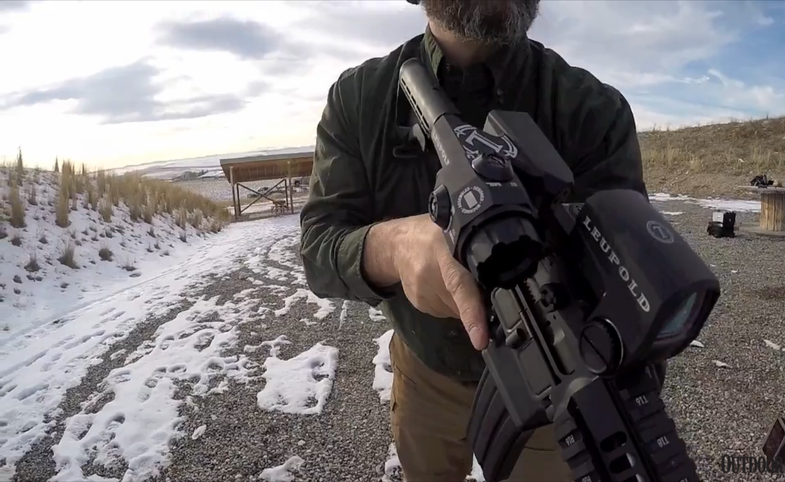 Speed versus precision. In dynamic shooting situations—whether while hunting or in competition—you’re going to have to trade one of these goals for the other. Often the decision is based on shot distance. Targets up close can be taken much faster than those that are football fields away. A puzzle for shooters has been how to cut down the time it takes to transition from those targets at arm’s length to targets way out there, and back again.

Competitive shooters use two common methods to make quick transitions. One is to attach a lever to the magnification ring of their riflescope so they can toggle from low to high magnification as needed. The other is to employ a second set of sights on the rifle that they can look through by tilting the stock or otherwise repositioning their head. These methods work, but both require extra motion on the part of the shooter.

Leupold has created a dual-sight system that only requires the barest movement of the shooter’s eye to transition between a red-dot optic and a fixed-power 6x20mm scope. The idea behind it is simple, though the engineering to make it work is complex. With the rifle mounted the shooter can see through both optics. The red-dot is in the top of the shooter’s vision and the scope is right below it. Both can be zeroed to the same point of impact and by focusing on one versus the other the shooter can go from 1x to 6x faster than the blink of an eye.

I had a chance to use one of the first prototypes, which have been developed in conjunction with units in our military’s Joint Special Operations Command, and the system is remarkable for its speed, accuracy, versatility and bombproof construction. With just a little bit of practice I moved between targets arrayed within 25 feet of me to others at 100 yards and beyond at lightning speeds. Shooting from supported positions, I used the holdover reticle in the in the D-EVO to easily hit targets beyond 400 yards. The system does exactly what it is supposed to do. I can’t wait to use it at my next 3-gun match and while hunting coyotes. The D-EVO costs $1,499 and the LCO, Leupold’s red-dot optic, is $999.

-The offset body allows the D-EVO to see around the red-dot optic and is also the reason that the holdover marks in the reticle don’t run in a straight up-and-down line but angle slightly to the right.

-Both optics attach to a Picatinny rail with 1/2-inch nuts that can also be tightened with a large screwdriver.

-The LCO, for Leupold Carbine Optic, is a red-dot sight encased in a tough machined aluminum body.

-Like the D-EVO, the LCO is waterproof and rated for dive depths of 66 feet.

-A flat-bladed driver or cartridge rim can be used to move the 1/2 MOA windage and elevation adjustments.

Details on the CMR-W Reticle

The reticle in the D-EVO has a bold horseshoe shaped semi-circle with a central aiming dot that provides quick target acquisition. The holdover hash marks are calibrated for heavier (think 77-grain) .223 Rem./5.56 NATO rounds. With a 200-meter zero, the hash marks match up with bullet drops at 300, 400, 500 and 600 meters. The dots to either side of the hash marks are for wind drift values of 10 and 20 mph.

Mil-based marks on the long horizontal axis allow for compensation with moving targets. Those hash marks can also be used to range targets of a known size, as can the vertical mil scale on the left side of the reticle.