Fast and accurate shooting with an iron-sighted handgun isn’t easy. Mastering the fundamentals takes years of practice. Unfortunately, by the... 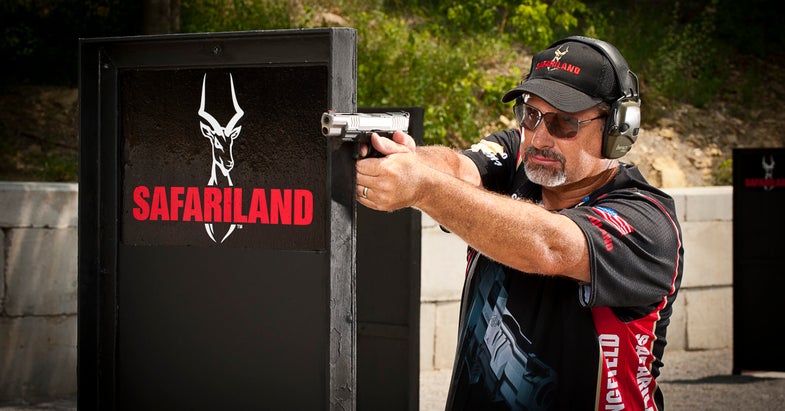 Fast and accurate shooting with an iron-sighted handgun isn’t easy. Mastering the fundamentals takes years of practice. Unfortunately, by the time one has them mastered, the inevitable affects of aging make the task even tougher.

The first symptoms, which include blurriness of vision when looking at close objects, usually occur around age 40. From there, this natural decrease continues to worsen until around age 65, when it stabilizes and virtually all elasticity of focus is gone. By this point, the eyes have lost most of their depth of field, making shooting a handgun much more difficult.

Prescription corrective lenses can be set to provide sharp focus at various distances. Reading glasses have a focal point set to about 16 inches. Intermediate lenses (often seen in glasses designed for computer use) run from 16 to 23 inches. Distant vision lenses are set to 20 feet and beyond. While those distances are standard, they are not carved in stone—the focus can be set for virtually any distance.

If you can’t get your sights in focus, you won’t hit the target. When getting prescription shooting glasses, set the focus to sight distance (SD). This is the distance from your eyes to the front sight, and it’s easy to determine without dragging a gun to the doctor’s office. Simply stand in front of a wall with your empty handgun in a normal shooting stance. Move slowly to the wall until the muzzle touches, then measure the distance (in inches) from your eyes to the wall.

That measurement is all the doctor needs to set the focus on prescription lenses to give a sharp sight picture. There are a number of lens styles to choose from. Some work well for shooting, while others do not.

What Not to Do
Some shooters have experimented with a near-focus SD prescription in one lens and a distant focus in the other in the same spectacle frame. Not many have made it work, because the eyes fight to choose one focus. This creates monocular vision—a constant focus shift—and can cause headaches.

Bifocal lenses feature a main lens with distant focus and a small insert lens at the bottom for near vision. They allow the wearer to look down to read and look up for distant vision. But they fail in action-pistol shooting because the head must change position to see through each lens, which changes the shooter’s stance and posture. And when the eye shifts between the two focal points, there will be an “image jump,” where the target appears to shift position, thus requiring additional time to reacquire the target and hindering the shooter in a match.

A So-So Option
Progressive lenses feature a vertical, hourglass-­shaped column of focus that flows smoothly from distant vision at the top to near-SD at the bottom. This lets the shooter switch focal points with little more than eye movement, and allows for a constant head position and a proper shooting stance. It also eliminates the image jump associated with bifocals. The drawback for action-pistol shooters is that the grinding process creates a degree of distortion in the lens that degrades peripheral vision. This results in a near tunnel vision effect, which can make rapid target transitions difficult.

Best Solution
Eye doctors in the know frequently recommend a modified bifocal design. The main portion of the lens is for distance vision, while the lower near-focus insert lens is set to the SD, instead of to standard reading distance. The SD insert is then moved upward in the lens to a point in line with the bottom of the pupil. This allows the shooter to maintain a constant head position for the closer lens and greatly reduces image jump. It helps to use frames with a nose pad that the shooter can adjust to achieve a proper and consistent positioning of the insert SD lens. This can provide the best of both distant and SD vision in a single pair of glasses.

I opt for a pair of prescription shooting glasses with the focus set to my SD. This removes any image jump or time lag for the eye to refocus between SD and distant lenses, because it’s the same focal point all the time. The sights are razor-sharp, and while distant objects are not, they are certainly visible. I can read a license plate at 13 yards, and targets are very visible at the ranges normally encountered in action-­pistol games. Even a 50-yard ICORE target is distinct enough for those sharp sights to hit the A Zone. In fact, at a recent charity match I competed in, one challenge stage had a single playing card set edgewise to the shooter at 10 yards. You had six tries to split it—it took me three.

That card was tough to see, but the sights were sharp and clear. That’s how you win.