Bowhunting Tips: How to Spot-and-Stalk Hunt

If you read outdoors magazines, you’ll quickly realize that one thing their writers are completely intrigued with is how some... 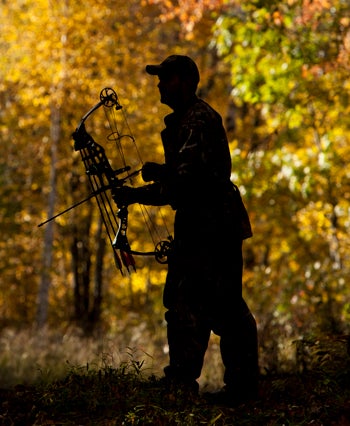 If you read outdoors magazines, you’ll quickly realize that one thing their writers are completely intrigued with is how some hunters have the uncanny ability to spot-and-stalk game like hungry mountain lions. Frankly, many of us are mystified by the few who can slip in on a deer or elk without the animal knowing until it’s too late. The truth is, however, that the game of spot-and-stalk isn’t complex. It just requires the hunter to be patient. Sounds simple enough, and to hear successful stalkers tell it, it truly is.

Arizona’s Chris Denham is a master stalker. Denham, editor of Western Hunter Magazine and part owner of Wilderness Athlete, a nutritional products manufacturer, spends a considerable amount of time in the field each year trying to be a ghost.

“Spot-and-stalk hunting isn’t rocket science—it’s really common sense,” says Denham. “You must stay out of the animal’s sight, stay out of its nose, and stay out of its ears. If you can do those things, you can slip in on them. Doing all three requires a healthy dose of patience. Some hunters try to rush, and when they do, they get busted.”

On the Right Track

▶ Big-game animals like deer or elk depend more on their sense of smell than any of their other senses. You can break a twig occasionally, and you can even get caught moving, but if an animal smells you, the hunt is over.

“I obsess over the wind direction,” says Denham. “I always carry a wind detector of some type [like a puff bottle] to make sure the wind is in my favor. As long as it is, I continue hunting. When the wind shifts, I back out until the wind changes or wait until the next day. You can never overcome the wind.”

“When you play chess, you are always thinking about your next move and moves three, four, and five,” says Denham. “Stalking is no different. I am always looking ahead for the next rock, tree, or bush to hide behind to get a little closer.”

The correct mental approach will get you far, but rethinking the physical approach is what will seal the deal. This is bow season, so it’s best to leave the half-mile belly crawl for when you’ve got a rifle in your hands. Denham believes standing and crouching are the best options.

“When you crawl, several parts of your body, including your knees, hands, and feet, are dragging across the ground making noise,” Denham says. “Then there’s the complication of having to get into bow-shooting position from the prone position. But when I’m standing, I can see where I am going and what I am doing, and the only thing touching the ground is my feet.” To soundproof those last few yards, Denham relies on Carlton’s Cat Paws.

“Cat Paws are basically large felt pads that attach to the bottom of your boots. They make staying quiet when walking on rocky terrain much easier.”

Whether you’re chasing whitetails, mule deer, elk, or antelope, understand that animals can’t reason like we do. Game animals are dumb and they make mistakes, and even if you haven’t done much spot-and-stalk hunting, you can still fill a tag.

“I’ve had animals see me move and look at me for a minute only to go back to feeding,” says Denham. “Just 14 minutes later, I kill them. When stalking, it is the last 50 yards that are the most difficult. This is when you really must be patient and wait an animal out. Sometimes you have to wait a half hour or more for an animal to get up or turn broadside. Patience and persistence is the name of the game.”

From the September 2012 issue of Outdoor Life magazine.