Deer Hunting Tips: What Fawn Behavior Can Tell You About the Rut

The world over, it’s a fact of life: Daddies don’t want the kids hanging around when it’s time to get... 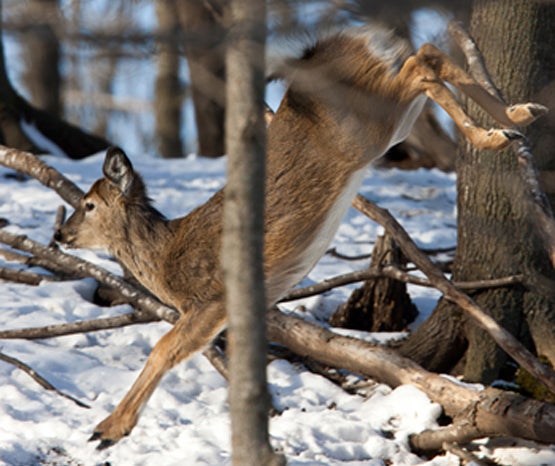 The world over, it’s a fact of life: Daddies don’t want the kids hanging around when it’s time to get busy with their mama.

You can turn that knowledge into a useful barometer of the rut if you keep your eyes on how fawns are acting where you hunt. Here’s what to look for, and what it tells you about the progress of a deer hunter’s favorite time of year.

▶ SEE THIS: Fawns with does

If you are seeing deer in family groups, then it’s still early in the breeding season, or even pre-rut. Cast your mind back to high school–the boys are way more ready for action than the girls are, and they’re on the move, looking for a dame that is ready to dance.
▶ DO THIS: Rattle, use buck decoys

Tickling the tines may trip Mr. Testosterone’s trigger, making him think that there are other rut-ready bucks in the neighborhood.

If you see a fawn wandering aimlessly, looking as scared as you did the first time you saw the Flying Monkeys of Oz as a child, or you see an increase in road-killed fawns, then the productive chase phase of the rut is on. Bucks are chasing these fawns away from the first does in estrus.

This is a great time to hunt downwind of bedding and feeding areas, as bucks troll through all day. Post up on travel corridors, such as where a saddle cuts through a ridge. Farm-country creek bottoms that connect woodlands can also be great. Take all of your deer calls, including the fawn bleat. If you can flip the maternal switch in a doe being dogged by a buck, she might bring him right into range.
_
▶ SEE THIS: Fawns rejoining does_

The first days that you see fawns glued to their mothers’ side again is when you’ll have some of the best hunting of the year, as bucks are roaming for one last fling. This is when many “never seen him before” brutes get taken.
_**
▶ DO THIS: Hunt transition areas**_

Hunt the same kind of transition areas as in the chase phase. If you see a solo doe on the move, set up along her trail and multiple bucks may be along shortly. Calls can help, as can a doe decoy if you are bowhunting.

▶ SEE THIS: Fawns chased by bucks

▶ DO THIS: Blow fawn bleats

The older fawns will be cycling for their first estrus. A few bleats could pull a lecherous old buck into your sights.