Before the grass grows up and hides them, groundhogs are vulnerable now on the edges of sun-struck fields. Bust out... 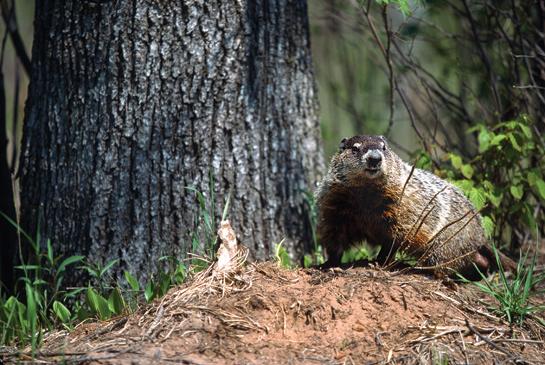 Before the grass grows up and hides them, groundhogs are vulnerable now on the edges of sun-struck fields. Bust out a flat-shooting rifle and help landowners who complain that these rodents perforate their pastures.

Hunt the Habitat
Look for den entrances beneath stumps and brush piled up from land-clearing projects. Woodchucks den along the edges of rock walls at old homesites, on steep banks covered in kudzu and weeds, and under old farm buildings.

Search for groundhogs in apple orchards, where they climb trees to steal apples and to avoid predators. Look along the edges of fields of corn, soybeans, and wheat.

How do you know if the den is occupied? If you see flies and gnats swarming around its opening, it’s in use. Keep it in view and wait for the occupant to emerge.

The Strategic Shot
Watch swirling winds–at your location, but also at your target’s–not only because of their influence on bullets but because woodchucks have an uncanny sense of smell.

Because you’ll face shots in excess of 200 yards, always use a rangefinder and shooting sticks. When possible, use a fully adjustable bipod, since the adjusted legs can help you when shooting on sloped terrain. Bipods with legs 20 inches or longer can also help you position your rifle above tall grasses in hayfields.

Time Afield
Groundhogs are most active on warm summer days and afternoons, but they can occasionally be found out on overcast early spring days. On sunny days, woodchucks enjoy lounging and sunning atop logs, boulders, and other flat, warm surfaces.

Rediscover the fun of woodchucks. Their greatest gift is the time they give us in the field, on lazy spring afternoons, between the end of deer season and the beginning of turkey season.

Cooper Firearms varmint extreme
This elegant single-shot, built on the M21 action, deserves a distinctive cartridge: the .20 VarTarg, a .221 Fireball necked-down to .204. ($2,255; www.cooperfirearms.com)

Jarrett Beanfield Rifle
Get this high-performance rifle chambered in .243 Catbird, which can propel light 6mm bullets (68 to 70 grains) at a blistering 4,100 fps. ($5,380; jarrettrifles.com)

Remington 700 SPS Varmint
This beefy rifle has a 26-inch barrel and an extra forend stud for mounting a bipod. If you hurry, you might be able to find one in .17 Rem. Fireball. ($732; remington.com)