OL’s bow guru Todd Kuhn hit the floor of the 2014 Archery Trade Association show to check out the newest... 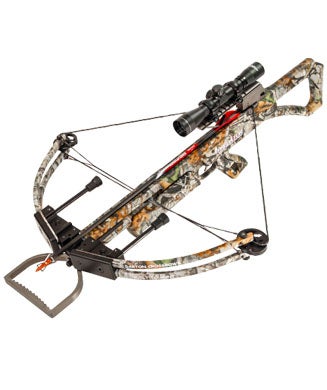 OL’s bow guru Todd Kuhn hit the floor of the 2014 Archery Trade Association show to check out the newest compound bow and crossbow introductions. This is a sneak peek at what’s new in the bowhunting world for this year. For a full review of the 2014 bows and crossbows, check out our annual bow test in the August issue.

Todd Kuhn takes a look at Bear Archery’s Agenda 7 compound bow from the Archery Trade Association showroom floor. The bow features a new string suppressor system that can be tweaked for your shooting style. With a 6-inch brace height, Bear says it slings arrows at 350 feet per second.

The DNA SP is one of PSE’s top two flagship bows for 2014. The guys at PSE attempted to build a bow similar to last year’s DNA (Outdoor Life’s 2013 Editor’s Choice award winner), but with a smoother draw cycle thanks to a redesigned cam system. PSE says the new cam system will create a softer draw and a deeper valley.

The bow also sports a new cable guard that is designed to relieve lateral torque.

The Carbon Spyder features the hollow carbon tubes that Hoyt has become known for, but in a reengineered shape. Hoyt says the new design will make it a more durable and better shooting bow. The 2014 Spyder can shoot up to 340 feet per second and comes in multiple configurations. The mass weight on the 30-inch version of the bow is only 3.5 pounds.

The new Energy 35 and its little brother the Energy 32 feature beefed up risers for more durability, but their design doesn’t pack on extra weight. The bow also sports high quality strings and a two-track binary cam system.

This bow features a new cam system that is designed to eliminate the cams from leaning on the limbs and to keep the shooter from overdrawing the bow. The grip was designed by professional shooters. ??The bow will retail for about $700.

The TAC Ordnance by PSE brings the AR style to the archery world. The bow works off of a AR lower and achieves speeds of 405 feet per second, according to the company. Another unique feature of this cross bow is that it does not utilize a rail.

It comes standard issue with a bipod and a Whisker Biscuit and retails for about $1,000.

This compact crossbow from TenPoint weighs only 6.5 pounds. The woven, carbon fiber barrel helps with weight reduction and cuts down on string wear. The crossbow also features TenPoint’s classic trigger set at 3.5 pounds. This is a high-end bow that is sure to be a sweet shooter, but it will cost you…

Darton’s crossbow last year was the Terminator, but they’ve turned it into the Predator with longer limbs paired with a shorter and lighter frame. The bow also has great finger protection and comes at a screaming price … it will retail for about $500.