Is This the New World-Record Brown Bear? 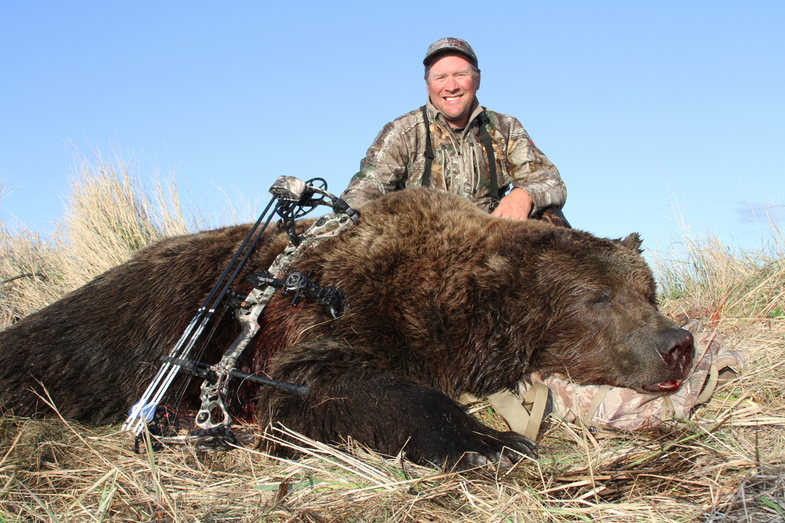 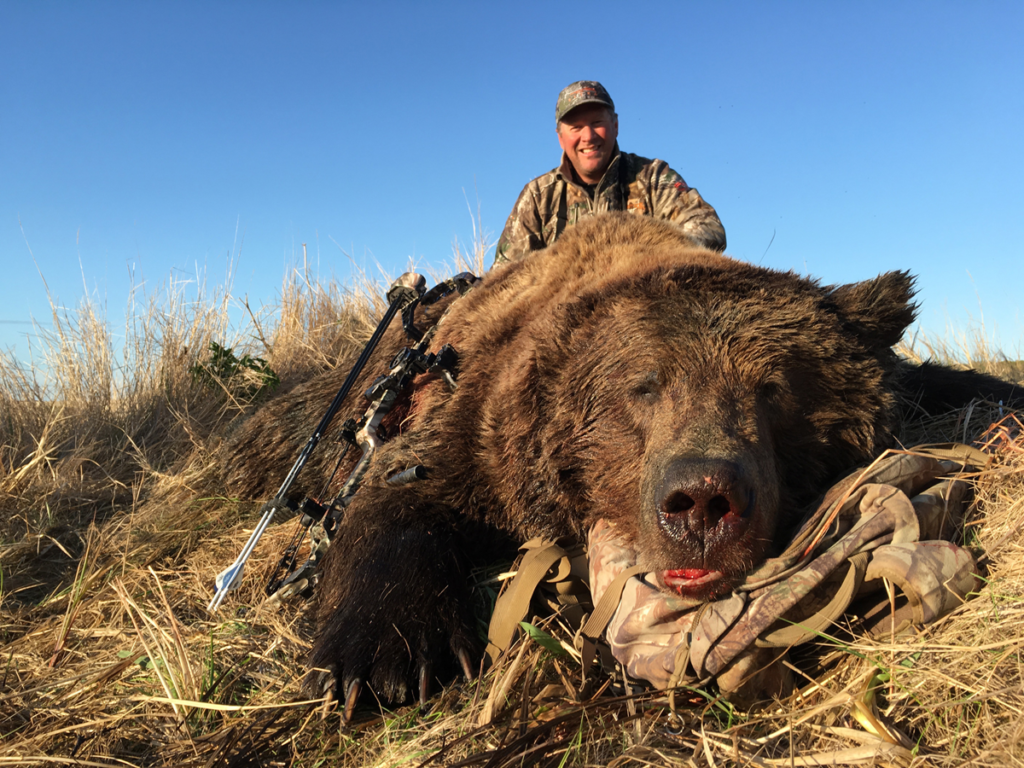 _Chris Stewart’s Alaskan brown bear could be in contention for the world record. _

Friday the 13th. If you’re superstitious, you likely wouldn’t spend that day perched atop the tundra in Alaska, bowhunting brown bear.

But that’s exactly where Chris Stewart was on May 13, 2016. Stewart has always dreamed of taking a brown bear with his bow. This would be his second brown bear hunt, and he hired Bruce Hallingstad, owner of Becharof Lodge in Egegik, Alaska—a place known for big bears.

“It was day four of my 10-day hunt, and my guide Carl Adams and I sat overlooking miles of tundra,” Stewart recounts. “At 6:30 p.m., Adams spotted a wolf in the distance. It was raiding duck and gull nests, but moving our direction. Soon, the wolf closed from 800 to 350 yards. That’s when I let him have it with my 7mm Ultra Mag.” 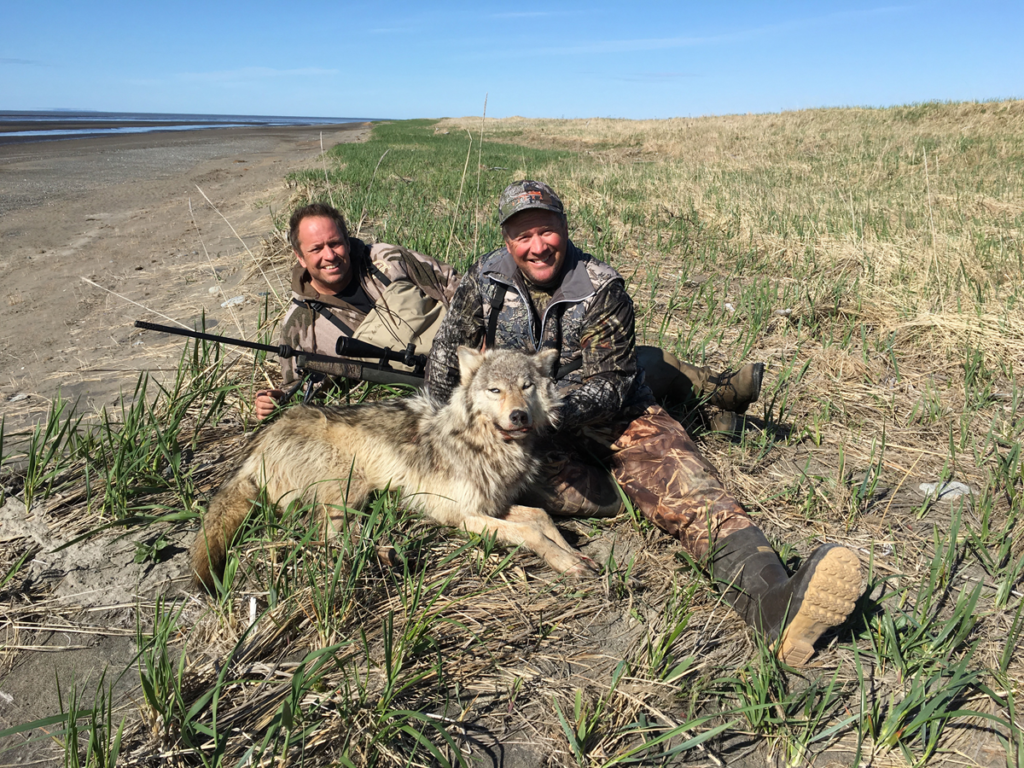 Guide Carl Adams (left) and Chris Stewart with a gray wolf taken on Friday May 13. Note the sea wall in the background, which, two hours after this shot was taken, would play a major part in Stewart’s bear hunt.

Though Stewart carried a rifle, he made it clear to Adams that his priority was to get a bear with his bow. Less than two hours later, a big bear appeared.

“The bear came running from a low spot in the tundra and sprinted over 500 yards, right to the beach,” Stewart says. “When it hit the ocean it turned and fed straight away from us. We tried catching up, but it went from 800 yards to 1,000 so fast we had to just sit and watch.” 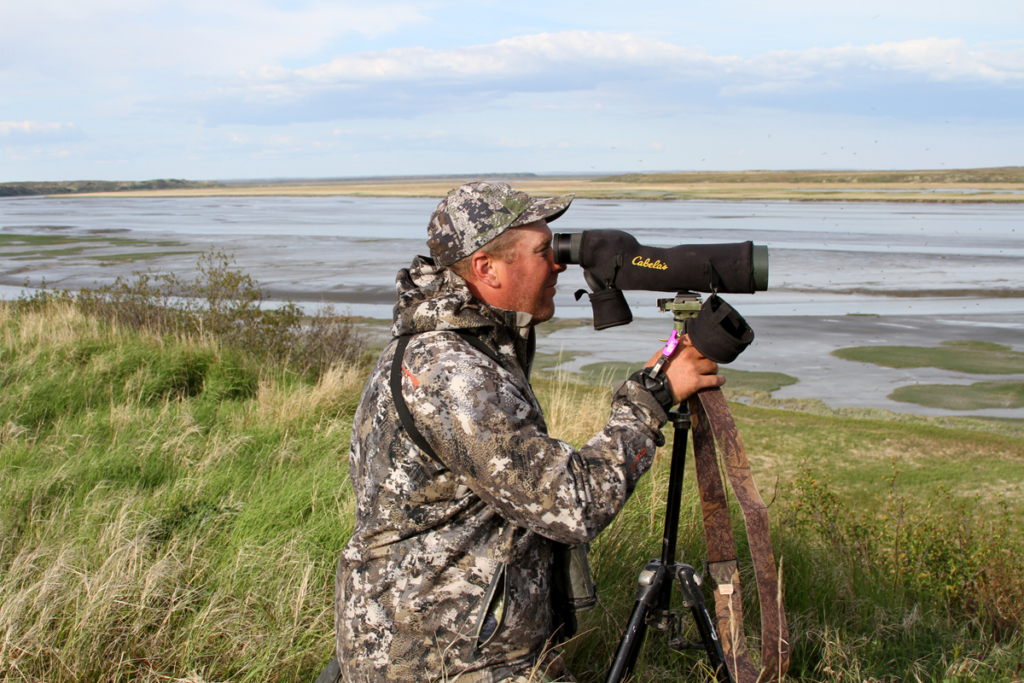 Minutes later the bear turned and headed back toward land. Between the beach and the tundra was a sea wall, a high spot built up of eroded sediment. The sea wall was five to ten-feet higher than the tundra and beach it divided, and this is where Adams and Chris sat. When the bear reached the natural wall, it turned and walked directly at the hunters.

“There was a low spot about 150 yards in front of us,” Stewart explains. “I grabbed my bow and sprinted along the backside of the sea wall, out of sight from the bear; Adams followed. When we looked up, the bear was still heading our way.” 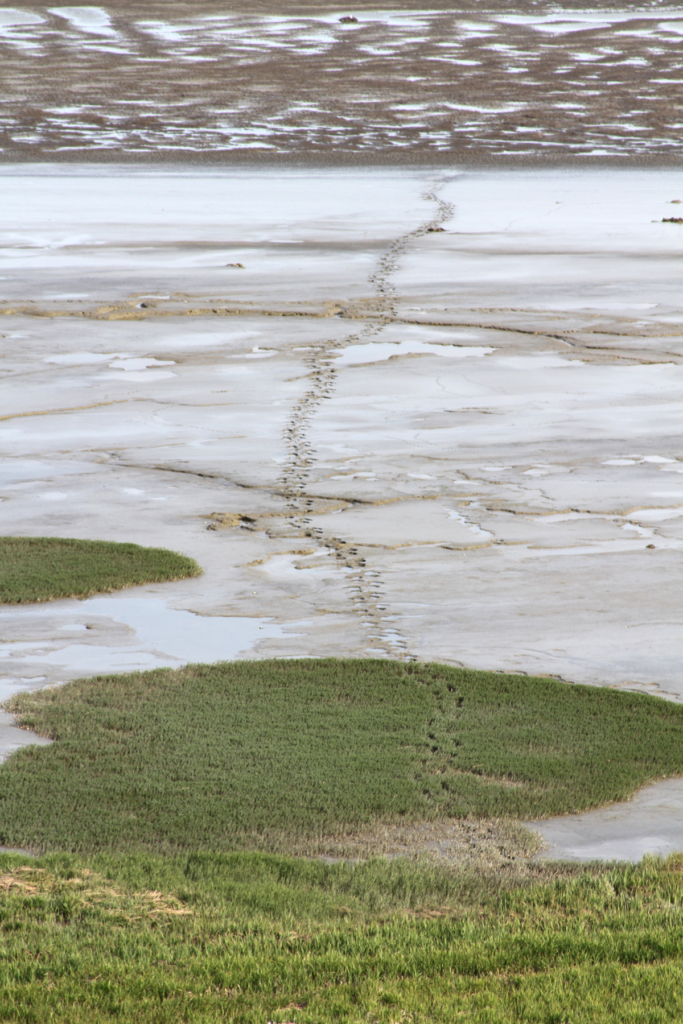 Brown bear tracks across a mud flat at low tide near Egegik, Alaska. Spring is the time many bears travel from their denning area, 75 miles or more to the east, to feast on high protein food along the beach for the next six months.

Soon the bear was within 600 yards, then 300, then 100. The bear was approaching from the left, and Stewart knew he was going to have to let it pass before he could draw his bow.

“I didn’t want him to see me, and needed the vitals totally exposed.”

When the bear got to 20 yards, Stewart was already lying down so the bear wouldn’t bust him. When the big boar brushed by Stewart at 12 yards, he could hear the bear breathing, and dared not move. 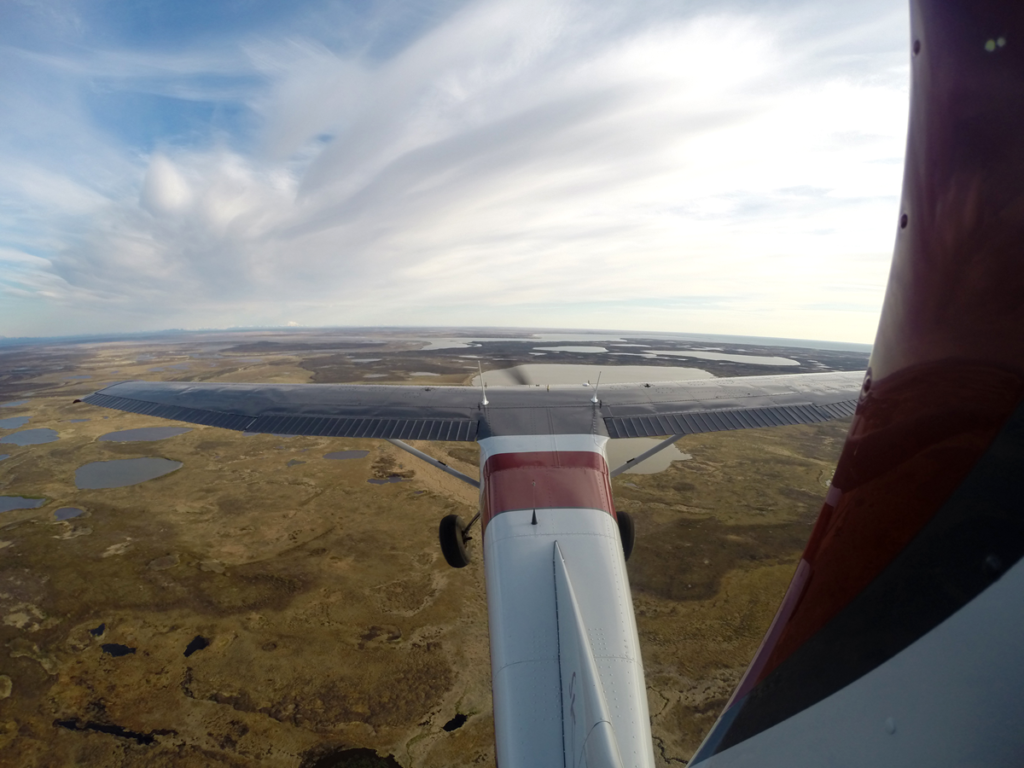 The tundra of the Alaskan Peninsula may seem flat and desolate from the air, but there’s a lot of food and some monster brown bears in this land.

“He walked right by me, and when I came up, he was 22 yards away,” Stewart says. “I raised high on my knees so the arrow could clear the grass, and the shot hit perfectly, passing through both lungs. The bear ran less than 70 yards and fell over.”

“Walking up on that bear, I was speechless,” Stewart says, reliving it. “I just couldn’t believe how massive he was.”

Adams was whooping and hollering with excitement. It was Adams’ ninth bear he’d guided for Hallingstad, and his first bowhunter. And what a bear it was. 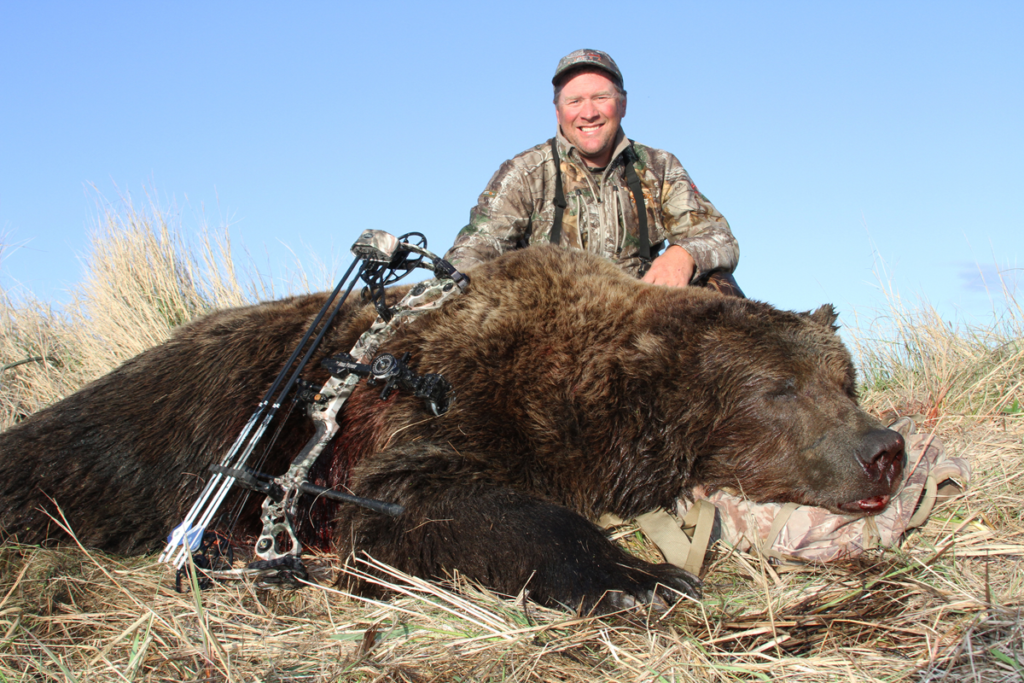 “I didn’t care how big the bear was,” Stewart says, smiling. “The amazing thing is, in bowhunting, when one little thing goes wrong, the hunt is over. But on this hunt, every single aspect played out perfectly, making this Friday the 13th one I’ll never forget.” 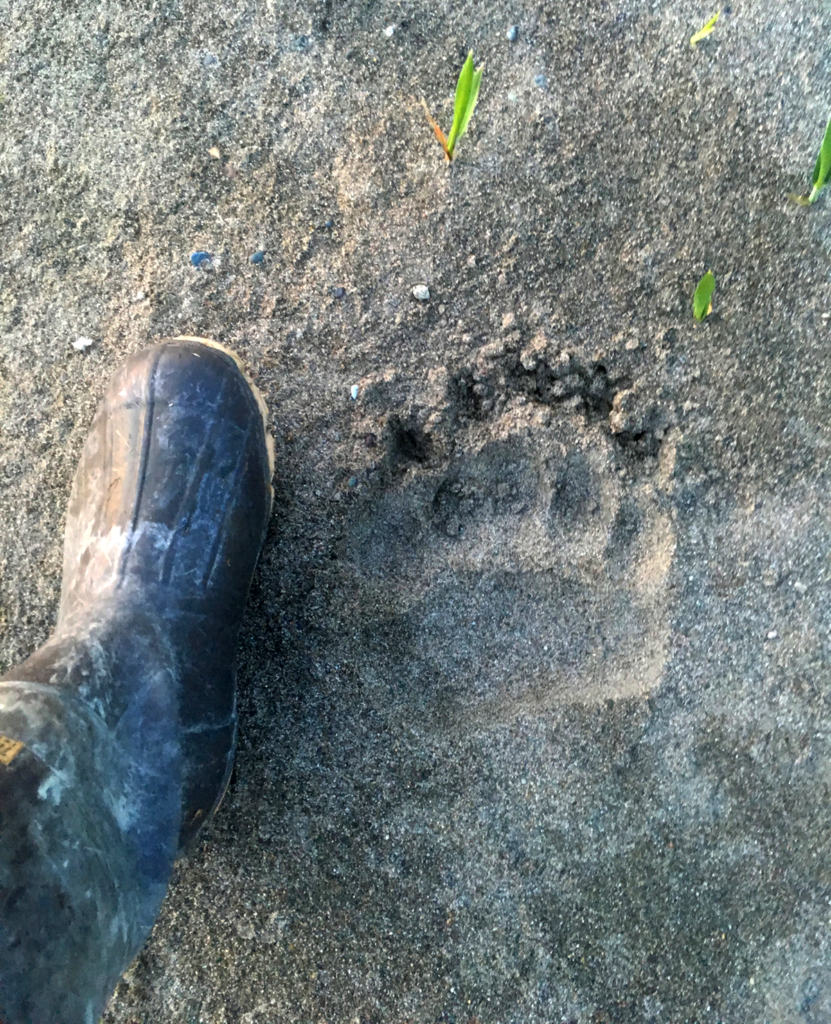