If you’ve been in the Live Hunt loop lately, I’m sure that you’ve read that instead of my hard-hitting .375,... 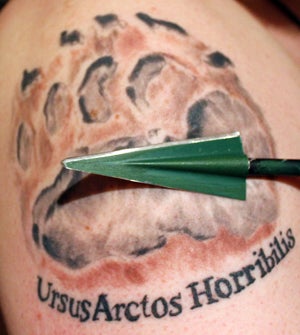 If you’ve been in the Live Hunt loop lately, I’m sure that you’ve read that instead of my hard-hitting .375, I’ve chosen to try and take a brown bear with my recurve bow. If you’ve read that, you probably either think I’m either crazy or stupid, and truth be told I might just be both.

However, in my defense, I must say the recurve is even more deadly a weapon now than it was when it was first invented. I have several reasons for choosing to go with a traditional bow, so hear me out.

I guess the first question would be, Why would I want to try and kill one of the largest land predators on the face of the earth with a bow? My response to that would be, Why not? I have yet to kill a coastal brown bear, and while I wouldn’t be ashamed to shoot one with a rifle, I have recently become more interested in bowhunting. The more I thought about it, the more I wanted to kill my first brown bear with a bow. Every year there are quite a few brownies that are put on the ground by well placed arrows, so I don’t exactly consider myself Evil Knievel jumping 50 school buses.

This now begs the question, Why would I want to use a traditional bow? My best answer for that one is simply: That’s what I like to shoot. I used compounds for awhile, but I have a lot more fun overcoming the challenges of shooting a recurve. I also enjoy the nostalgia of using this classic style of bow that many of the great “fathers of bowhunting” used. Shooting a recurve is harder than shooting a compound bow, plain and simple, but a recurve does have some advantages. It’s very possible that I will have to make a very short-range or quick shot on a bear, and shooting instinctively is much, much quicker than using sights.

On shots like this, I know compound shooters who have missed shots because they couldn’t get lined up fast enough, and also because they didn’t have time to get their release on the string in time to draw, whereas I can shoot with my bare fingers if I have to. From the time I hit full draw, the average time until I release the arrow is usually less than 2 seconds. Compounds definitely have higher arrow speed, but I’m not convinced that they are any more deadly. The recurve I’m using has about a 75-pound draw weight and slings a 575-grain arrow at 195 feet per second. With a heavy arrow like this, and a heavy two-bladed, single-bevel broadhead, it will do some serious damage. Extensive penetration studies by Dr. Ed Ashby conclude that heavy arrows with single-bevel broadheads just plain penetrate better than lighter, faster arrows. On top of that, my broadheads fly like a dream, and I am getting very comfortable out to 45 yards, which is probably as far as most compound shooters would want to chance a shot on a brown bear.

Although I’m very excited and anxious to have the opportunity at a bow shot at one of these huge critters, there are definitely some considerations I’m having to make and real risks I’m going to have to face if I want to accomplish this.