Tips and Tactics: How to Hunt Brown Bears

Tom Martineau/TheRawSpirit.com THE COASTAL ALASKAN brown bear and the grizzly bear are the same species, Ursus arctos horribilis, which as... 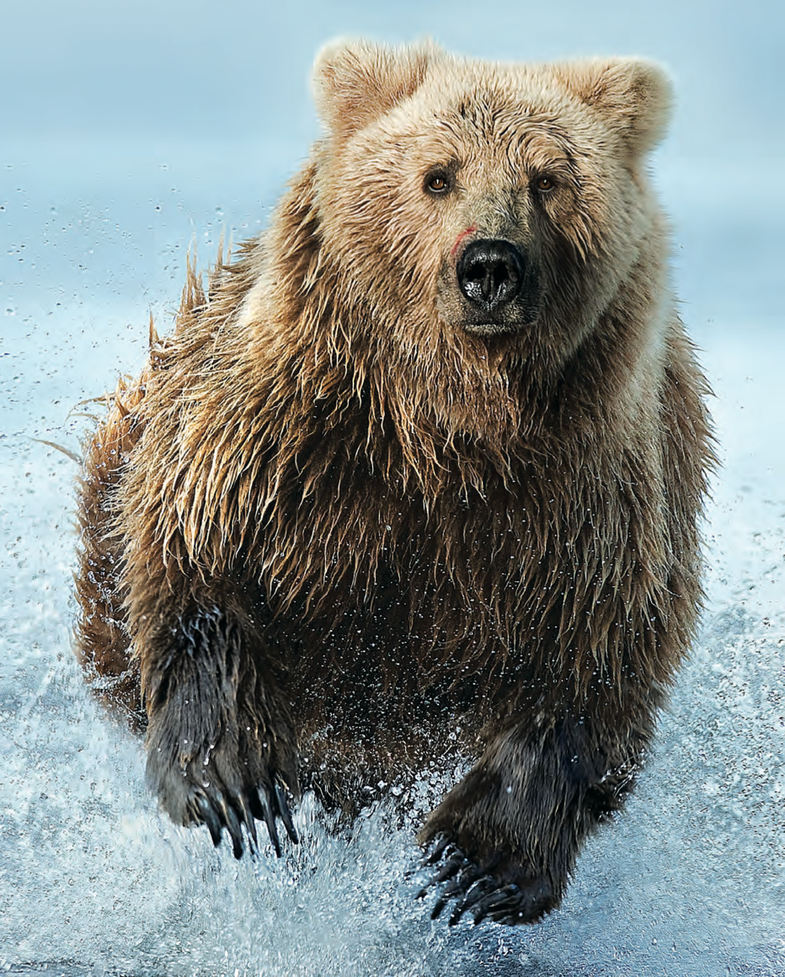 THE COASTAL ALASKAN brown bear and the grizzly bear are the same species, Ursus arctos horribilis, which as a name is pretty descriptive. Large bears are North America’s only true dangerous game and, out of all of them, the grizzly might well be the most cantankerous. These bears are mean tempered, tough as granite, and always a challenge to hunt. The grizzly bear is a creature of the wilderness, and he does not thrive where there is civilization. He lives on his own terms, takes no guff from anything or anybody, and is my favorite North American animal.

The coastal Alaskan brown bear was once thought to be a separate species from the interior grizzly, but they are now known to be the same species. The difference is the coastal bear leads a much easier life, has plenty to eat, and has evolved into a larger bear. The interior bears are much smaller and usually are more aggressive. (Small bear syndrome, maybe?)

The bears of the Kodiak Archipelago are the largest brown bears and are classified as a distinct subspecies Ursus arctos middendorffi. Typically, the coastal and island bears are called brown bears while the interior bears are called grizzlies. Although rivaled by the polar bear, the Alaskan brown bear is said to be the largest meat-eating mammal in North America. These bears can run up to 1,600 pounds (726 kg), which is a lot to deal with if you encounter one in a foul mood. More commonly, a big male will run 1,000–1,200 pounds (454–544 kg), which is still a lot of bear.

Regardless of which variety you hunt, at some point every bear hunter asks this question: How do I tell a big bear from a smaller one? It’s difficult to answer because it depends, mainly on the area. Alaskan guides claim that a 9-foot (2.7-meter) interior grizzly squares wider and shorter than a 9-foot (2.7-meter) coastal brownie. Same dimensions, but the measurement isn’t achieved the same way.

In general, the best way to judge a bear is by its behavior. Larger boars act differently, deliberately. They move slowly and powerfully while smaller bears are nervous and keep watching larger bears. If you doubt the size of a bear, wait. You’ll know a block-headed trophy boar when you see him.

In the spring, brown bears are fresh out of their dens and looking for food to prepare for the coming breeding season. Hunting along the coastal beaches is very productive, as the bears search there for washed-up food. Hunters may also venture back into the mountains, often on snowmobiles and snowshoes, to find newly opened bear dens—following tracks in the snow to locate them or glassing the snowline where the bears will be foraging for food. 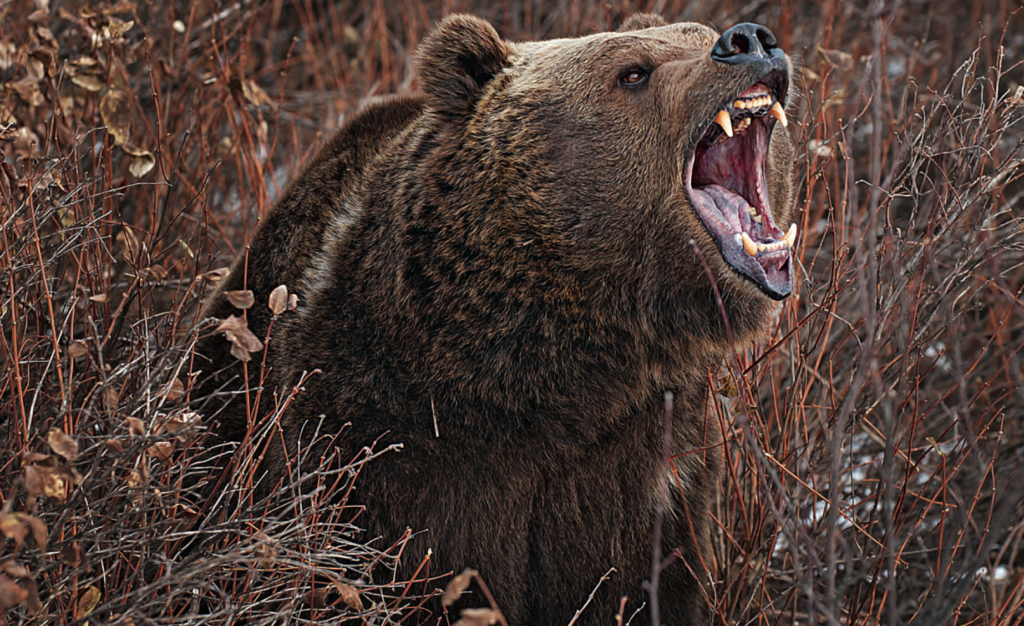 In the fall, the bears are on the move, looking for food in an effort to fatten up for the long winter hibernation. During a typical day, the hunter will climb to a high point overlooking a lot of prime bear territory and then will sit and glass for hours at a time. Often this will include a salmon stream where the bears might be feeding on spawning fish. Once a bear has been located and judged to be of trophy quality, the hunter will attempt to stalk close enough for a shot.

Because these bears live in some of the toughest country on earth, stalking is often not easy. The lower lands are choked with thick alder bushes or, if it’s open, the swampy tundra is littered with ill-spaced hummocks that are never the right distances apart for stepping on. There are deep rivers, marshy bogs, and even steep, rocky, cliff- infested hills to navigate. Nobody goes anywhere fast in coastal Alaska.

If the bear is feeding, a stalk is pretty straightforward. But if the bear is traveling, the only hope is to get ahead of him and wait. Either way, due to the thick brush and rough terrain, brown bears are often shot at relatively close range.

I believe in carrying a big handgun when living in bear country. Rifles get left behind when you are going to the outhouse or to the river for a bucket of water. You can also lose them in an altercation and they can be unwieldy inside a tent. Rifles get set down, left behind, or lost, but a pistol is attached to your body and should be with you at all times.

The .44 Magnum, .454 Casull, .500 S&W, or comparable cartridges can all do the job. Load your revolver with ammo using heavy, hard-cast, non-expanding bullets for deep penetration—and hope you never have to use it.

The grizzly bear has a distinctive hump above his shoulders and a dished out face, which distinguishes him from the black bear.

The northern Rocky Mountain states have good populations of grizzlies these days—perhaps even too many, but political issues have prevented the return of grizzly hunting in these areas.

Canada has grizzly bears in British Columbia, Alberta, Nunavut, Yukon, and the Northwest Territories. Hunting has become increasingly restricted in recent years and nonresidents can hunt only in British Columbia and Yukon at present. Alaska has good populations and allows hunting throughout much of the state.

While the same species as the brown bear, the grizzly is a much different creature. For the most part, they live a hardscrabble life in the far north, where they struggle to find enough to eat. As a result, they have evolved into a smaller bear than the brown. But at the same time, they have also developed an attitude. On average, the grizzly bear is much more aggressive than his bigger brother, the brown bear.

The inland grizzly is smaller than the brown bear by about 30 percent, but size varies a great deal from region to region. Some bears in Alaska or British Columbia may be nearly as large as a brown bear, whereas the grizzlies in the Yukon River or in the Northwest Territories tend to be much smaller.

Hunting is usually spot and stalk, often in conjunction with another species like moose or caribou. Often a hunter will sit on the gut pile from a moose kill and wait for the bear to show up to feed. Bears are also hunted along mountainside slides where, particularly in the spring, they come to feed on the fresh green plants. —Bryce Towsley

Brown bears are true dangerous game, and, in Alaska, they hurt or kill people just about every year. They are big, incredibly tough animals, and you must take them seriously.

I’ll never forget the first big boar I saw. I was sitting on a hill on the Peninsula, and the sun had just broken through the clouds. The big boar was about a half a mile from us, walking down a steep hill. Every time he took a step his shoulder muscles would bulge in the golden sunshine.

I can promise you, no rifle will ever feel too big in your hands under this kind of circumstance.

While a lot of bears fall each year to the various .300 magnums, I believe a true bear gun starts with the .338 Winchester. The .338 Remington Ultra Mag is another good choice, as is the .338

Weatherby and .338-378 Weatherby. The .358 Norma is also good, and I have hunted brown bear with my wildcat .358 UMT, based on the Remington Ultra Mag case. I have used the .375 H&H for brown bear more than any other cartridge, though any of the .375 cartridges will also do very well. The .416 cartridges are favored by many brown bear guides for backing up clients, and are a good choice for the hunter as well. The .458 cartridges will work, but lack the flat trajectory for a possible longer shot. 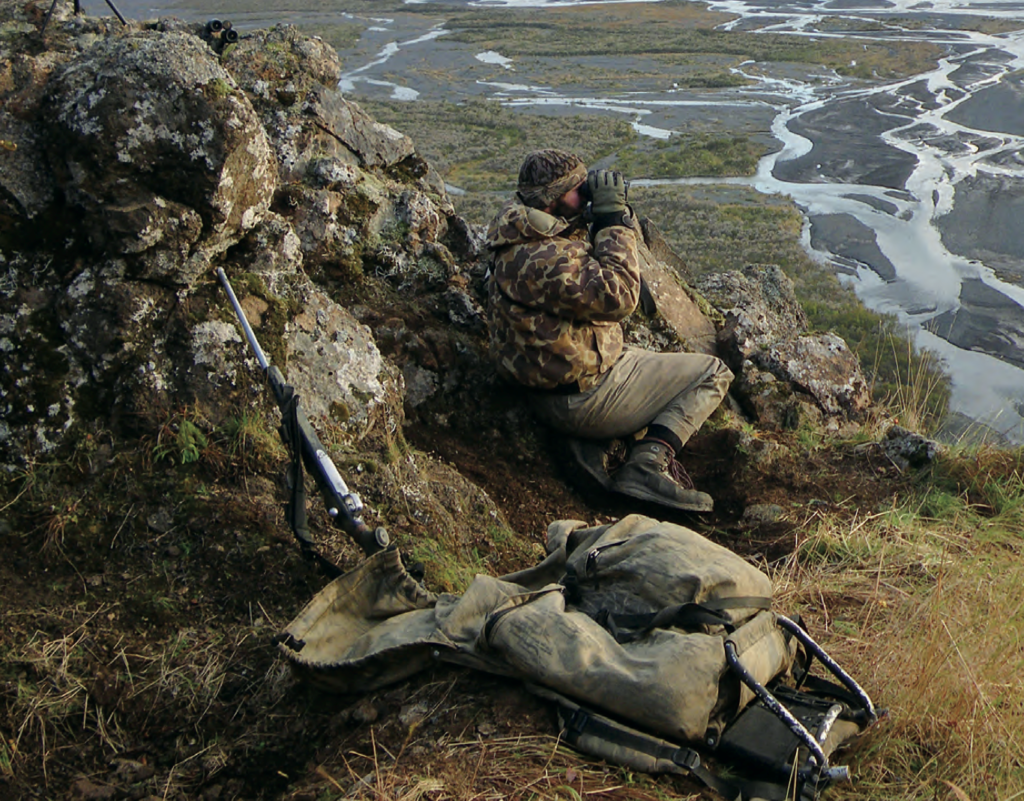 Most of what applies to brown bear hunting in terms of cartridge selection also applies to grizzlies, and none of those rifles suggested for brown bear are inappropriate. However, keep in mind that the size of the bears can vary a great deal. If you are hunting coastal bears in British Columbia, they may well be as big as a brown bear, so stick with the bigger guns. But if you are hunting the much smaller inland grizzly that may run half the size of a brown, you might think about downsizing a bit.

Also, grizzlies are often part of a multispecies hunt including moose, caribou, sheep, or mountain goats, so a rifle appropriate to all the game being hunted is a good idea. Any of the various .300 Magnums or .338 Magnums would be a good choice.