A deer hunter in northwest Kansas has provided the state Department of Wildlife and Parks with photographic evidence of a... 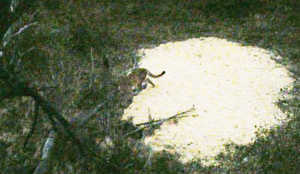 A deer hunter in northwest Kansas has provided the state Department of Wildlife and Parks with photographic evidence of a mountain lion he watched from his treestand earlier this month, marking the first live cougar documentation in The Sunflower State in 100 years.

The hunter, who was not identified by the KDWP, took the photographs while aloft in a treestand near Wakeeney. He told officials the lion emerged near a pile of corn he was perched above and he was able to snap multiple photos as it approached within 10 feet of the tree stand.

The hunter told wildlife authorities that the animal looked up at him, then moved out of sight, he said. The entire encounter lasted less than a minute, and the lion never stopped walking.

“KDWP staff were able to verify that the location was in Kansas, and the story seemed legitimate,” said Matt Peek, KDWP furbearer research biologist.

Although the origin of the mountain lion is unknown, cougars have appeared with varying frequency in other Midwestern states since the 1990s. In November, 2007, a young male mountain lion was shot by a landowner in Barber County. Prior to that, the last documented occurrence was in 1904.

“KDWP receives numerous reports of mountain lion sightings annually,” Peek added, “but almost all have either been cases of mistaken identity or lacked physical evidence indicating a mountain lion had been present.”