Why Deer Hunters Should Never Wear Blue Jeans, and Other Important Facts About Deer Vision

You’re sitting in a treestand watching the perfect buck walk into range, and he ducks behind a tree. As you... 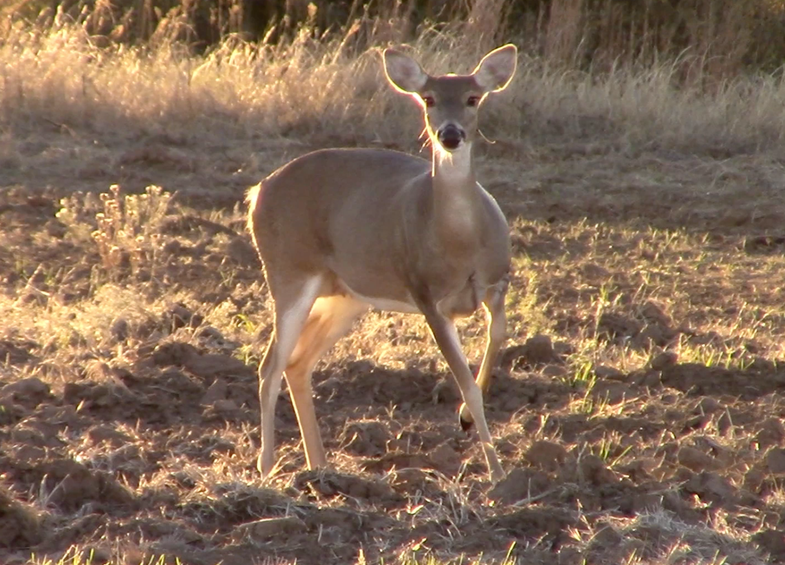 You’re sitting in a treestand watching the perfect buck walk into range, and he ducks behind a tree. As you lean to the side to get a better view, you hear a crinkle in your pocket from a food wrapper. The buck’s head pops up to look around. Does he see you? Can he tell where you are?

A number of researchers have been able to shed some light on what that buck can see, and what they’ve found can prevent you from getting busted by your quarry—even if your own stealth is less than perfect. Their work has identified three key differences between the vision of white-tailed deer and people: physical traits that influence how deer see, low-light vision, and color perception. Let’s look at each of these.

PHYSICAL TRAITS
If you have ever looked into the eyes of a live deer, you may have noticed that their eyes are shaped much differently than ours are. While a human has a round pupil, a deer’s pupil is shaped like a horizontal oval. This oval shape allows a deer to view a larger area to the left and right of it rather than what is above or below it. It is important to remember that a deer is a prey animal, hunted by other wildlife such as mountain lions, bears, and coyotes. Those predators are terrestrial (ground dwelling) like the deer, so the deer doesn’t naturally look up into the trees to detect danger.

Another physical trait associated with prey species is eye location on the head. While humans and other predators have forward-facing eyes, enabling us to focus on specific objects, deer eyes are located on the side of the head. This placement gives the deer a 310-degree arc of vision to more easily keep an eye out for predators (even those approaching from behind), while humans are limited to only 140 degrees. The combination of pupil shape and eye placement results in a large horizontal view window. However the deer lacks a high degree of focus, which is why when the buck heard you shift in your treestand he slightly bobbed and weaved his head in an attempt to get a better view of his surroundings.

LOW-LIGHT VISION
When you’re driving at night with your headlights on, you may notice that a deer’s eyes glow when hit with your high beams. Referred to as “eye shine,” this is caused by a dense layer of fibrous tissue called the tapetum lucidum, found in the back of the eye. The purpose of this specialized tissue is to reflect visible light back through the eye so that it can be picked up by photoreceptors. In this way, it’s almost like deer have built-in night-vision goggles. Deer are able to amplify the limited amount of moonlight during the darkest night to identify and move about their surroundings. This ocular adaption is not limited to deer; the tapetum lucidum is found in a number of mammals that are active at night, including cats, dogs, and raccoons.

COLOR PERCEPTION
Lastly, very few animals share the same perception of colors. Some animals have been documented as seeing only in black and white, while others can perceive colors that we humans cannot. The ability to see colors is controlled by the rods, which register dim-light vision, and cones, which detect color via three primary wavelengths of blue, green, and red. Subtle differences in the cones can greatly impact what an individual can see, which is why some people may suffer from color-blindness. In the case of deer, their ability to see blue is more amplified than that of humans, their green vision is similar to ours, and they lack definition of reds.

So what does all this mean for hunters? Well, when it comes to their field of vision, a deer can see the majority of its surroundings, but with limited vision above or below. The wide placement of their eyes comes at a cost: they lack the high degree of acuity that is associated with periscopic vision. When dusk comes, deer have the advantage. They can see their surroundings much more clearly than we can, which explains how they can run through the woods at night but rarely ever trip over a log. For color, there’s no need to be concerned about wearing blaze orange because the deer won’t be able to zero in on it like a fellow hunter can. Just don’t wear your blue jeans; you’ll stick out like a sore thumb. The best camo is one that blends in with the environment and doesn’t contain a lot of blues and whites (unless you’re hunting during snowfall, when whites will do just fine).

Just don’t move more than you have to, and for goodness sakes, remove those crinkly candy bar wrappers from your hunting pants.

For references, and a more thorough overview of deer vision, see: